I Believe Attorney General Barr Will Come Through

RUSH: Okay. Robert in Long Island. Great to have you, sir. I’m glad you called.

CALLER: Thank you, Mr. Limbaugh. Thanks for taking my call.

CALLER: Let me ask a question: Why doesn’t Mr. Trump just turn around and drop the hammer, do a TV press conference with Mr. Barr next to him and show the FISA report, release the FISA report, release all the documents proving Spygate happened, change the conversation, and start making these Democrats act like cockroaches when the lights are turned out? 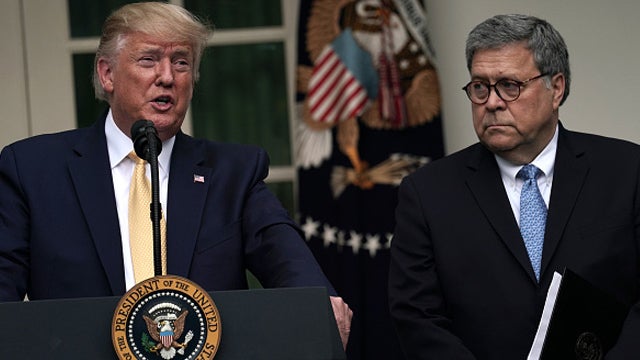 CALLER: Do you think we’ll see it soon?

RUSH: I’m pretty confident. I wish I could give you this as ontological certitude but all I can tell you is this is what I really strongly think is going to happen.

CALLER: (audio drops) — about that Yovanovitch ordering like monitoring of Sean Hannity, Laura Ingraham. I mean, this is crazy.

RUSH: I missed the first part of what you said there, but thanks for the call.

The Obama-appointed ambassador — and, by the way, what other host would do this? What other host would endeavor during the break to try to find out what the caller was talking about so that the caller doesn’t feel like he had wasted his time calling? There no other host who would do this. Just so you know. So the Yovanovitch (that’s the name here) is the Obama-appointed ambassador to Ukraine who was a Never Trumper, big time anti-Trumper. “Judicial Watch has documents that show that this Yovanovitch,” it’s a she, “ordered her staff to monitor the social media of” Hannity, Ingraham, Dan Bongino and a bunch of other conservatives.

In other words, an Obama-appointed ambassador was ordering her staff to spy on conservative media. Again, more facts unearthed at Judicial Watch. “Judicial Watch has obtained information indicating ambassador Marie Yovanovitch, an Obama appointee, may have violated laws [may?] and government regulations by ordering subordinates to target certain U.S. people using State Department resources prior to being recalled as ambassador to Ukraine in spring.

“Yovanovitch reportedly created a list of people who were to be monitored via social media and other means.” You’re asking why am I not on this? Because I don’t do social media, and here’s one of the reasons. It’s not the only reason, but this is one of them. I think it’s a sewer. But there’s other reasons beside that. “According to subsequent reports from Fox News and from Sara Carter, the list of people that Yovanovitch monitored included” Donald Trump Jr., Laura Ingraham, Sean Hannity, Michael McFall (that’s Obama’s ambassador to Russia) Dan Bongino, Ryan Saavedra, Sebastian Gorka, John Solomon, Lou Dobbs, Pamela Geller, and Sara Carter.

All of the alternative media that dig up the truth every day, who ought to be winning Pulitzer Prizes and are totally ignored. Here’s an Obama-appointed ambassador Ukraine ordering her State Department employees to dig up dirt on these people. Obama! I’m telling you: All roads lead back to Obama. They don’t lead back to Putin. And I am not on that list because I don’t do social media. And I guarantee you I am, by the way. But they just don’t have to monitor me on social media.

All they gotta do is turn on the radio. Now, again, do you know any host who would take the 3-1/2 minutes of an obscene profit time-out to go try to find out what the caller was talking about? ‘Cause that caller was a great. He didn’t get his full time, and because he was potted down there, I had a bit of a problem understanding him. But that’s what he was talking about. But just to restate, I do think there gonna be indictments. I think all of this is gonna get blown up, folks. There’s too much of it, and it’s not gonna be contained.