I’d be stunned if they go after him and his kid on this stuff ’cause they all, one way or the other, have – (interruption) Is Bernie all the way — I think Bernie’s all the way done. It’s hard to say, but could somebody tell me the difference between Bernie Sanders and Elizabeth Warren? They’re one and the same, except one’s male, one’s female. Policy-wise, what’s the difference? What is the difference?

I don’t think this was ever gonna be the year for Bernie anyway. Bernie kind of blew the wad back in 2016. And when Bernie sat around and let Hillary rig the primaries, it kind of established that Bernie’s willing to lose and – (interruption) Well, that’s what happened. You denying that? The primaries were rigged. Everything that they accuse Trump of doing they actually did.

Here’s Anthony in Kingston, New Hampshire. Great to have you on the EIB Network, Anthony. Hi.

CALLER: Rush, I feel like I won a contest. My question is we’ve heard from both Joe Biden and Hunter Biden, and Joe Biden said, quote, “This has already been looked into. Come on, man, it’s been debunked.” And yesterday we heard from Hunter Biden saying that this matter has been debunked also. So my question is, who are the names of the investigators, where can we find the report, and what were the true findings of their report?

RUSH: Exactly. You know what they mean? In the media. It’s been debunked by the media. The media says nothing to see here, not reporting on it, they know full well the media’s running cover for ’em. It’s a good catch because that’s exactly what they mean ’cause there isn’t an official report into it, and it hasn’t been debunked.

CALLER: No government officials have looked into this connection at all.

RUSH: Well, not us. I mean, the Ukrainians supposedly have and/or are, status unknown. But why would Hunter quit? He quit the ChiCom deal, but why would he quit any of this?

CALLER: ‘Cause it was wrong. 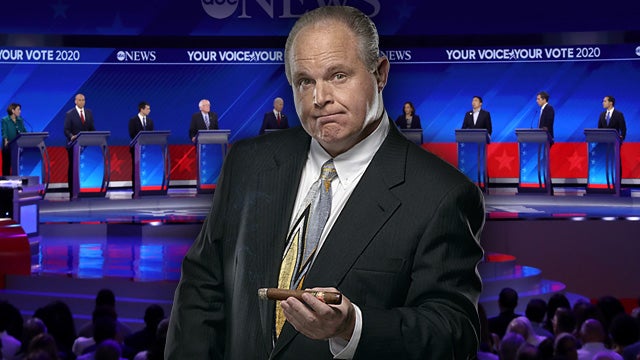 CALLER: There’s no reason behind it other than he was doing something shady and they know it.

RUSH: Yeah. But, look, the Bidens with pikers compared to the Clintons. I mean, the Bidens are pretenders. They’re amateurs compared to the Clintons. But you’re right. The point is they knew, everybody knew. I imagine within the Democrat Party — I actually do think this is probably true — that within the Democrat Party, the people he’s talking about here would watch Plugs make his maneuvers here to help his kids, and they’re probably privately, “That’s just chump change. You gotta give Joe credit for trying, though, man. He’s using everything he’s got.”

But over there, the Clintons, they’re showing how everybody should do this. They are the ones that have this wired, $250,000 for a 20-minute speech, 25 times. A foundation collecting money from all over the world before she even gets elected. So Hunter with his hundred thousand here and so forth there in Ukraine, it’s probably looked at as tiddlywinks money, but still — I know.

It’ll be real interesting to see if they do call Plugs out on this. Let’s see if I’m right about this ’cause I think they’re gonna find other ways — they’re gonna have to attack him. Did Tulsi Gabbard make the cut? Okay. So we know she’s gonna go after Kamala Harris. Warren’s gonna have to go after Plugs. And I’ll be real surprised if they go after Plugs on this Hunter stuff, especially since ABC cleared them.

In fact, it’s fascinating. Remember it was ABC in May that did the original story that when I saw it and shared it with you, I told you this is the beginning of the phase where they’re taking Biden out, because ABC did a comprehensive story on all of the graft and all of the curiosities, Biden and his kid with all these arrangements and all this money.

And then it comes to light above and beyond the reporting of the ABC story in May and ABC clears them of the charge today in the Good Morning America interview. And, of course, you know what Hunter’s primary technique was to turn it back on Trump, which is all the Democrats have.

RUSH: Hi. Welcome back, folks. It’s great to have you, as always, Rush Limbaugh, America’s Real Anchorman, doing the job the Drive-By Media ostensibly once did. Whether or not they ever did, this program fills the bill, all while having more fun than a human being should be allowed to have.

Okay. Trump approval numbers barely moving. Warren and Biden, the top Democrats. Warren is now ahead of the field by three points. So it means she’s gonna be the target tonight. They’ll also spend some time on trying to finish off Plugs. If they think Warren being up three means Plugs is finished. It’s gonna be — you talk about — I was telling Snerdley today, the last thing I want to do is watch this thing tonight, the last thing. But see, folks, I have to.

People ask, “Rush, can’t you have somebody watch that and just summarize it?” I could very easily, but that would be getting lazy. And that would mean having to trust somebody else’s interpretation of something, and I have found that my interpretations of things are often unique. If I start farming this stuff out, stop doing it myself, eventually you’re gonna know. And so I will endeavor, it is going to be an endeavor, but I will do it.