ESPN Jock Sniffer: We Have to Import ChiCom Censorship

RUSH: Yesterday toward the end of the program I told you I was watching somebody on TV who said that relationships with China require an exchange program. It was the most convoluted, crazy thing I’d ever heard. Well, we dug it up. Cookie went out there and found it in all of the audio and video that had been broadcast yesterday. It turned out to be infobabe Brooke Baldwin interviewing ESPN jock sniffer “LZ” Granderson. (interruption) Well, they’re all groupies. 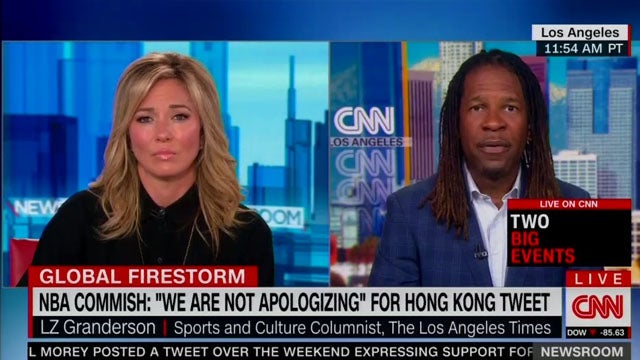 All of these reporters at ESPN, sports people, they’re all groupies. “Jock sniffer” is just another name for groupie. LZ Granderson, the question, “Do you think that there is a benefit to have this connection with China that, you know, an American presence in a country such as this and our American values perhaps seep into the culture, and how we roll?” She basically said, “LZ, is it a good thing that we’re in China? Maybe American values can find a way to be intertwined there?”

GRANDERSON: Well, it’s an exchange, and this is what not just the NBA’s dealing with, but American culture in general. Yes, we are exporting a certain degree of freedom of expression.

GRANDERSON: But we also are importing communist censorship. That is, there’s only gonna be so much of our freedom in which (sic) China’s gonna allow in, and if we want to do business with them, we may have to consider some censorship of our own. So it’s an exchange. It’s not a one-way street here.

BALDWIN: Thank you so much for your opinion.

RUSH: (laughing) Did you hear this? It’s an exchange program! The ChiComs are going to have to allow some of our freedom in. But in exchange, we’re gonna have to consider importing some of their censorship. We’re gonna have to import censorship. We’re going to have to use censorship in America if we’re gonna expect the ChiComs to dole out some freedom. Good… No wonder Millennials don’t know what the hell is happening in the world today!