RUSH: The Democrats cannot let go. They can’t let go of Russian collusion. Jerry Nadler and that stupid hearing with Lewandowski. It is amazing. It’s purely for show, folks. There is no crime that Nadler is investigating. And do you know why? It’s really very simple. The reason there isn’t a crime that Nadler is pursuing in this faux impeachment business is that the FBI and Mueller investigation were what?

Now, most people don’t know this. You in this audience do because we spent countless days explaining that this was a counterintelligence investigation, not criminal. As such, there’s no way Trump could obstruct anything. Now, what Nadler and his buddies are trying to say, “Well, that’s not true because what Trump did, Trump went to a bunch of people and told them to make sure this investigation ended quickly, that he didn’t do anything, if they want to investigate to make sure it doesn’t happen in the –”

And it’s really frustrating because this is the kind of thing that’s so esoteric that unless you explain it to people like I am explaining it to you, everybody’s gonna think there’s an impeachment inquiry going on. There isn’t even one of those going on! What Nadler is doing is not an official impeachment inquiry. He hasn’t made the proper steps nothing for that to actually exist. This is nothing but show. And in the midst of that, we got this story that some intelligence person overheard the president say something that he didn’t think was proper.

So he called somebody, and he reported to the inspector general for the intelligence community. He reported that the president said something. It’s not against the law for the president to say things! The president can say what he wants to anybody! Like Obama could say to Medvedev (paraphrased), “Hey, tell Vladimir to be patient. As soon as I win reelection, I’ll get back on schedule getting rid of American nukes.” Remember that open-mic grab of Obama talking to the Russian president, who was then gonna go back and report to Putin?

Nobody ever said it was criminal and nobody ever said Obama couldn’t say it. The problem was that he was saying it, that he appeared to be colluding with the Russians. He appeared to be assuring drugs, “Don’t worry. As soon as I get reelected, we’ll get back to the plan.” Nobody can stop Obama from saying that. Nobody can put Obama in jail for saying that. The real question here is, “What the hell is the intelligence community doing and continuing to do to try to get rid of Donald Trump?” This coup is actually ongoing. It hasn’t stopped!

Even some intel people… You’d be amazed. Phil Mudd (who does not like Trump at all) is a CNN guy. He’s a CNN consultant. I’m told, by the way, that the female consultants at CNN love this guy. I’m told they think he’s hot. I’m just throwing that in there. I mean, it’s scuttlebutt that I’ve heard. More power to him. Even Phil Mudd is ticked off at this, ’cause it’s making the intelligence community look bad. The intelligence community has no oversight over the president! The president can tell anybody anything he wants, for crying out loud.

But now we got the speech police in the intel community filing reports with the inspector in general — and of course, this is gonna make people like Pelosi and Nadler want to have this “whistleblower” come up and testify. There’s nothing of high crimes and misdemeanors nature, there’s nothing criminal, there’s nothing untoward here at all — and it may not even be true! It probably isn’t! There’s so much made up.

RUSH: Here is Nate in Dover, Delaware. Nate, great to have you with us, sir. Hello.

CALLER: Hi, sir. It’s an honor to speak to you.

RUSH: Thank you very much. I appreciate that.

CALLER: My point is, I think the reason why the hoax is being continued and why the cabal is trying to further it is that they’re trying to stay is relevant. The Dems can’t compete with Trump’s economy and his foreign policy. So the way they stay relevant is to keep the cabal going forward.

RUSH: Yeah. I think you are on to something there. Really, the Democrats don’t have anything to run on. You know, they actually do, but they’re incapable of it. They can’t run on the economy. They tried, by the way. During the debates, I’m sure they’ve done what are called “trial balloons.” One of them will talk about how rotten the economy is and food stamps this and that or whatever the aspect the economy, and then they’ll test it to see how it went after the debate. I’m sure they’re finding out that attacks on the economy are falling dead.

Nobody thinks the economy’s in trouble, and nobody wants to think that it’s in trouble. Have you noticed they’ve stopped that? There was a period like seven or eight straight days (two business workweeks, 10 days), “A recession is happening tomorrow! A recession might happen next week!” Where’d that go? I mean, we were gonna drop off the edge of the cliff! We were gonna have a recession! They released these trial balloons, and they’re bombing — and they bombed out on Russian cheating with Trump. They bombed out to collusion. They bombed out on obstruction. 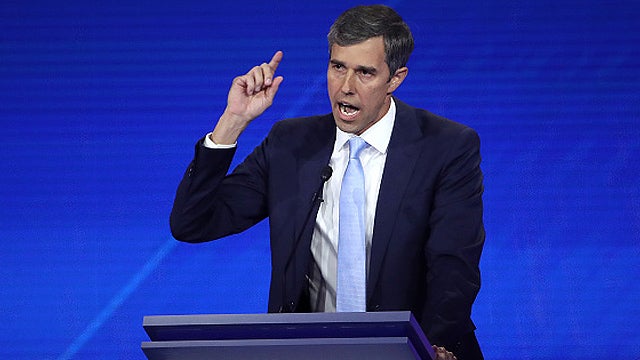 They don’t have anything, in terms of policy, that they can even enter the arena and compete with Trump on. Now Beto has broken the covenant and literally told the world what the Democrat Party’s really objective with guns is, and that is to take yours away. So old Nate here’s got a point. About the only thing they can do is they’ve gotta hold their he base, they’ve got to keep their base solid. And the way to do that is to continue to pursue Trump as though he is a traitor, that he cheated, stole the election with the Russians; Hillary should still be president!

That’s all they’ve got, that Trump is a reprobate, that Trump is a criminal. By the way, Mr. Snerdley, big story today. You may have seen it. The Never Trumpers are proudly announcing they are going to try to get Biden elected. They’re going to his fundraisers. They’re donating. The Never Trumper Republicans are joining the Biden race for the exact reason we said: They think it will be easy to take control of his presidency since he doesn’t know where he is half the time.

But I said the Democrats do have a technique. They do have something. They couldn’t pull it off. It’s not in them to do it. But there is a way. When things are going well and you want the job, what’s your pitch? Your pitch is, “I can do it better. I can make the economy better. I can make the economy stronger.” But since the Democrats live on fear and chaos, they can’t go there. So they are kind of stuck policy-wise.