Harris and Warren Revive Myth That Michael Brown Was Murdered

RUSH: I mentioned earlier, Kamala Harris and Fauxcahontas, Elizabeth Warren, have now revived the “hands up, don’t shoot” mantra that Michael Brown was “murdered.” Kamala Harris is doing this to distract from her horrible record as a prosecutor. This police officer’s name was Darren Wilson. This guy’s life was destroyed. Michael Brown attempted to take his gun. Let me briefly recap what really happened, according to the Obama administration grand jury, the DOJ investigation of the local grand jury and all of that.

Michael Brown usually went into this convenience store. He got some dope, marijuana, whatever it was. He went into this place and he held it up! He demanded some things and didn’t pay. He then walked out and was in the middle of the street when the call went out that this convenience store had just been held up. The perp was identified. He was a very recognizable guy, very big. He was walking down the middle of the street.

The media said (impression), “He was on the sidewalk and he was contemplating his first semester of college. He was a happy man on a Saturday afternoon! He was walking along, minding his own business — until this evil, racist white cop came out of nowhere and murdered him.” It’s not what happened. The cop came up and stopped him on suspicion of having been involved in the holdup, and then asked him why he was walking in the middle of the street.

The guy tried to get in the cop car and get the cop’s gun, and it was at that point the gun was discharged. The cop was totally cleared numerous times. Yet the media and Black Lives Matter continued to push this lie “hands up, don’t shoot!” Meaning, “He tried to surrender! He tried to surrender, Michael Brown. He just wanted to go to college. He was just minding his own business, happily strolling the sidewalk, thinking about his first semester at college,” and “hands up, don’t shoot!” 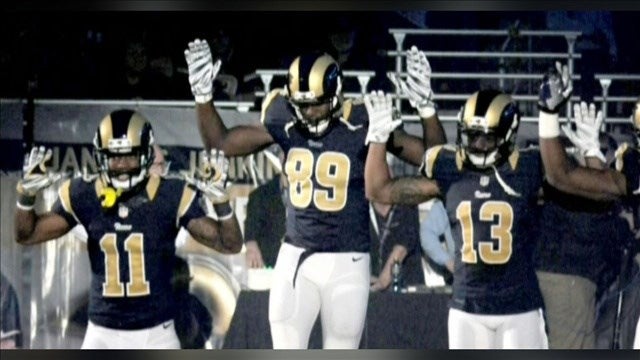 The LA Rams players, then the St. Louis Rams players are going through the motions of holding up their hands during pregame player introductions. This whole myth gets perpetrated by Black Lives Matter and the Drive-By Media. And the truth of this story gets forever obscured, until it can’t be any longer when the grand jury finally issues its report. Well, guess what now? Kamala Harris and Elizabeth Warren are back reviving this whole thing as Michael Brown was “murdered.” Kamala Harris’ tweet:

“Michael Brown’s murder forever changed Ferguson and America. His tragic death sparked a desperately needed conversation and a nationwide movement. We must fight for stronger accountability and racial equity in our justice system.” Fauxcahontas: “5 years ago Michael Brown was murdered by a white police officer in… ” This is actionable! This cop, Darren Wilson, if he wanted to — and I doubt that he does because of what the media would do to him if he surfaced again. But he could sue these people!

Michael Brown was not murdered!

He made a move on the cop.

He reached inside the car and attempted to get the cop’s gun.

No less than Eric Holder had to confirm that this is what happened after they tried to portray the St. Louis County grand jury as corrupt and racist and white supremacist and white nationalist and neo-Nazi. “Father of Black Man Killed by U.S. Police in 2014 Demands Answers.” This is from the French version of the AP. “The father of Michael Brown, the black American whose killing by police triggered countrywide protests, on Friday marked the fifth anniversary of his son’s death by calling on the Justice Department to re-open its investigation into the shooting.

“Prosecutors dropped the case against the officer who shot the … 18-year-old … in the conservative state of Missouri,” it says here in the French News Agency story. In the conservative state…? How about “in the liberal Democrat city of Ferguson”? “I am demanding evidence to be reanalyzed…” They already did this! They investigated this 25 different times, desperately hoping for a way to rig the outcome! 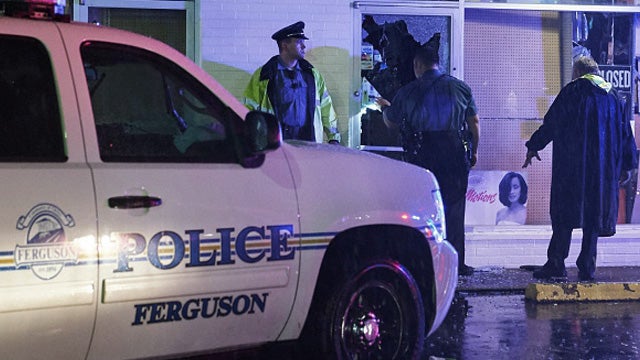 This is what has people ticked off! A cop is minding his own business, doing his job, somebody reaches for his gun. You try it! Try going for a cop’s gun sometime. Do it! See what happens to you! Especially if you have just been accused of robbing a convenience store and you’re walking down the middle of the street getting in the way of traffic, whether you’re dreaming about your freshman year of college or not.

These people are irresponsible. These Democrat candidates are irresponsible. This stuff I predict is already beginning to backfire on ’em and is gonna continue to do so. And that’s why I wouldn’t make deal one with these people on any kind of new gun legislation. I wouldn’t give them an inch because they will take a mile and still not be finished. But we’ll wait and see what happens on that.