You People Are Making News Across America

RUSH: Folks, this is not all. This stuff that we’re talking about, you talk about a disconnect, Washington doesn’t know what’s going on out in the world. Grab audio sound bite number 22. There’s lots of stuff happening out there that’s not about this. I have here a montage of the CBS affiliate in Auburn, Alabama, and Columbus, Georgia. The anchor’s name is Chuck Leonard, Fox 54 TV anchor Roslyn Giles and they’re talking about something they think is pretty cool that happened in the neighborhood.

TERESA WHITAKER: The home of fallen officer William Buechner had his mortgage paid off by a 9/11 memorial foundation after a national fundraiser. Officer Buechner of Auburn was killed in the line of duty on May 19th responding to a domestic disturbance call. The Tunnel to Towers CEO and Chairman Frank Siller says the mortgages of Buechner and five other officers have now been paid in full. The money for the payments came from a $1.5 million donation by Rush Limbaugh to Tunnel to Towers. The donation was funded through sales of Limbaugh’s Betsy Ross T-shirts on his website.

GILES: The Tunnel to Towers Foundation pledged six weeks ago to take on Officer William Buechner’s mortgage after the foundation received a $2 million donation from radio host Rush Limbaugh.

RUSH: The donation is not from me. We’re just forwarding the money. The donation is from you! The donation comes from the continuing, overwhelming sales of the Stand Up for Betsy Ross T-shirt. And we did start out at a million and a half that was donated, and sales kept pouring in, so we upped it to two million. Sales continue to — I mean, they’re brisk, we had another truck deliver printed shirts today. 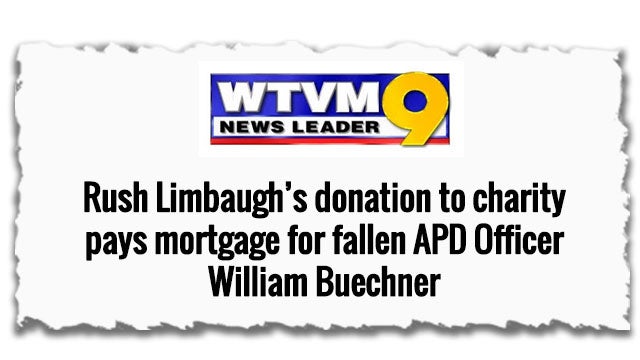 There’s no stopping this. I’ve got shirts right here. Let me hold it up here real quickly, limited time, but there it is, the Stand Up for Betsy Ross T-shirt at RushLimbaugh.com. Click on the “Store” tab. The proceeds go to the Tunnel to Towers foundation, $2 million to the charity and counting. It’s from you. It’s not from me. I’m just a pass-through.