RUSH: The first thing I want to play for you is Barr. We’re gonna go back (this is sound bite 22) to May 1. This is a big deal, folks. This is the evidence that Mueller was just lying repeatedly today when he claimed that the only reason they didn’t come to a decision on obstructing justice, charging Trump with obstruction was the guidelines from the Office of Legal Counsel which say you cannot indict a sitting president. He said, “That’s why we didn’t do it.” Democrats just drilled down on that and drilled down on that. But it’s not true.

Here’s the attorney general, William Barr, from May 1. This is a Senate Judiciary Committee hearing. He’s under oath during Senate committee testimony. 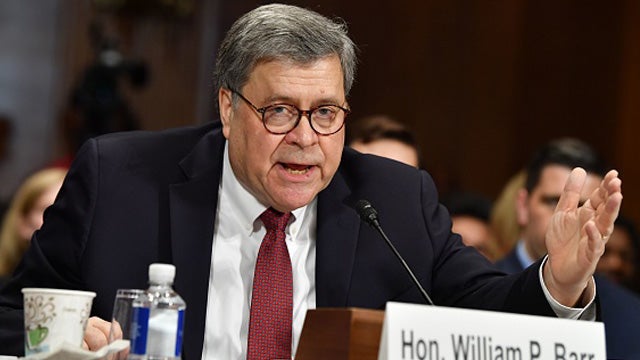 BARR: Mueller stated three times to us in that meeting in response to our questioning that he emphatically was not saying that but for the OLC opinion, he would have found obstruction. He said that in the future the facts of a case against a president might be such that a special counsel would recommend abandoning the OLC opinion, but this is not such a case.

RUSH: I shouldn’t… I feel the need to translate this even though I probably don’t have to. He is saying here that Bob Mueller told him three times that the regulations from the Office of Legal Counsel had no determination whatsoever in the decision not to charge the president with obstruction. And, yet all day today, Mueller has insisted that’s the only reason he didn’t. He’s fallen back on this. He’s relied on it. It’s almost like a crutch and a backstop. You know, Democrats keep zeroing in, pounding in.

“The president obstructed! The president wanted you fired! The president asked people to fire you! The president told them not to talk to you,” blah, blah, blah. “Well, uh, uh, why didn’t you charge obstruction? Why did you not exonerate the president?” “Well, the office of guidelines say I can’t indict a sitting president.” William Barr, numerous times (this is just recently on May 1) was saying that Mueller told him the exact opposite, that the Office of Legal Counsel guidelines had nothing to do with it.

Grab sound bite number 19. I’ve got sound bites for points that I made in the first hour of the program. This is the incredulous session where Mueller refuses to answer questions about whether or not Russian meddling altered any votes or changed the outcome of any election. It’s Greg Steube, who from Florida — Republican, Florida — asking about Russian meddling in the 2016 election.

STEUBE: Given your 22 months of investigation — tens of millions of dollars spent and millions of documents reviewed — did you obtain any evidence at all that any American voter changed their vote as a result of Russia’s election interference?

MUELLER: I’m not gonna speak to that.

STEUBE: You can’t speak to that?

STEUBE: After 22 months of investigation, there’s not any evidence in that document before us that any voter changed their vote because of their interference, and I’m asking you based on all of the documents that you reviewed —

MUELLER: That was… That was outside our purview!

STEUBE: Russian meddling was outside your purview?

MUELLER: (sputtering) But the impact of that meddling was undertaken by other, uhhh, agencies.

RUSH: This is a crock! This is absolutely unbelievable! “Uh, you… I’m not gonna speak to that. Can’t speak to that. (sputtering) It was outside our purview.” Outside your purview, whether Russians affected votes and changed elections? It was Rosenstein, ladies and gentlemen, who announced this! When they announced the Russian indictments, the troll farm indictments, it was Rosenstein who said, “Nowhere in these indictments is a single American citizen alleged to have been involved.

“Nowhere in these indictments is there an allegation that a single vote was changed or the outcome of a single election was altered.” So when they announced the indictments, Mueller’s boss acknowledged the Russians had nothing to do with changing a single vote or an election! Today, Mueller refuses to answer. He’s not gonna “speak to that.” He’s not going to speak to the discussion of Russian meddling. Here’s Ted Lieu. He’s a radical leftist Democrat from California leading Mueller to make this misstatement and lie about the Office of Legal Counsel decision…

LIEU: I’d like to ask you the reason again that you did not indict Donald Trump is because of OLC opinion stating that you cannot indict a sitting president, correct?

MUELLER: Uh, that is correct.

RUSH: All right, look, I don’t think Mueller knows what he’s answering here, folks. He hears a Democrat say, “Correct,” and he says, “Yes.” I really do. Because he just lied through his teeth there. Ted Lieu (grab sound bite 22 again, Mike) said, “I’d like to ask you the reason again that you did not indict Donald Trump is because of OLC [guidelines] stating that you cannot indict a sitting president, correct?” Mueller says, “That’s correct.” Here again is Barr on May 1…

BARR: Mueller stated three times to us in that meeting in response to our questioning that he emphatically was not saying that but for the OLC opinion, he would have found obstruction. He said that in the future the facts of a case against a president might be such that a special counsel would recommend abandoning the OLC opinion, but this is not such a case.

RUSH: By the way, Mueller has “clarified” the record on the answer he gave earlier this morning about the Office of Legal Counsel guidelines being the reason the reason that he did not recommend Trump be charged with obstruction. He’s clarified that because he was exposed. He was exposed as lying. Somebody got to him and said, “You told Barr that it had nothing to do with your decision, and Barr went before the Senate and said so!”

So Mueller has clarified that. He’s clarified after the fact. I know what you’re saying in there. “After the fact!” You guys have gotta stop worrying. You’re acting like this is doom today. This is not doom! You’re under the impression that the Democrats never fail, that they always accomplish what they set out to accomplish, and they don’t. This is so obviously just a pack full of lies. John Ratcliffe is dynamite again right now in exposing Mueller. He’s asking him all about Christopher Steele.

(Mueller impression) “I’m… I’m… I’m not… I’m not talking about Mr. Steele.” “Well, that’s incredible you won’t talk about him. You know, we agree with you that there were massive efforts by the Russians to interfere in our election, but you seem to want to ignore the efforts they made in colluding with Hillary Clinton.” (sputtering) “Well, I — I’m not here to do it that. Other areas of the Department of Justice are (sputtering) looking into that. Not in our… not in our purview here.”

You guys sit in there, I don’t think the Democrats are happy with what’s happening here today. This is not what they thought was gonna. They thought by now that impeachment would have been triggered and that the American people would be marching on Washington demanding it.

RUSH: Here is the august Mr. Impeccable, Mr. Integrity, Mr. Do Not Challenge My Honor, Robert Mueller correcting testimony earlier in the day…

MUELLER: I want to add one correction to my testimony this morning. I want to go back to one thing that was said this morning by Mr. Lieu who said — and I quote — “You didn’t charge the president because of the OLC opinion.” That is not the correct way to say it. As we say in the report and I said at the opening, we did not reach a determination as to whether the president committed a crime. 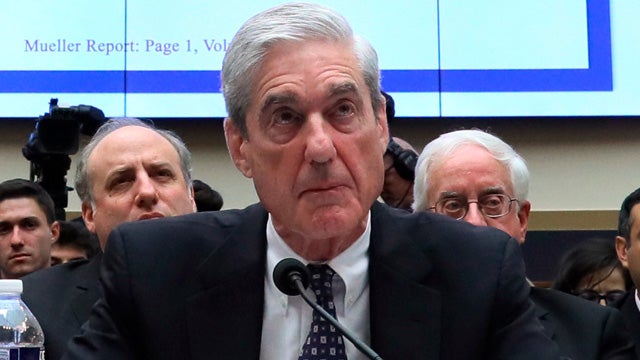 RUSH: “As we say in the report and I said at the opening, we did not reach a determination as to whether the president committed a crime.” See? The Democrats walked him into it, and he said that the only reason he didn’t was because the OLC guidelines, but Barr’s testimony to the Senate is out there. He said, “No, Bob told us three times it had nothing to do with that…” (chuckling) “Bob.” Their wives go to Bible study. “Bob told me three times,” and then there’s this. This is a Mark Meadows, Republican, North Carolina, tweet.

He’s quoting a question from Representative Armstrong in North Dakota asking Mueller a question. Now, this is classic. “‘When did you learn one of your top attorneys, Andrew Weissmann, attended Hillary Clinton’s 2016 election night party?’ Mueller: ‘I’m not sure.’ Armstrong: ‘Isn’t that a conflict of interest,'” one of your investigators went to a Hillary Clinton election night party? “Mueller: ‘I’m not going to answer that.'” (impression) It’s not in our purview. Uh, uh, uh, department of Justice, other — other — other departments are investigating that. It’s outside our purview.