Congressman Ratcliffe Explains the Law to the Special Counsel

RUSH: David in Denison, Texas. Great to have you on the program, sir. Hello.

CALLER: Yes, sir. Rush, I think a new Republican star was born today: Representative John Ratcliffe from northeastern Texas, Sam Rayburn’s old district. He’s the one that so emphatically pushed Mueller about the question of “exonerating” — you know, the role of a prosecutor is not to exonerate — and he really set the tone for the Republicans to follow. 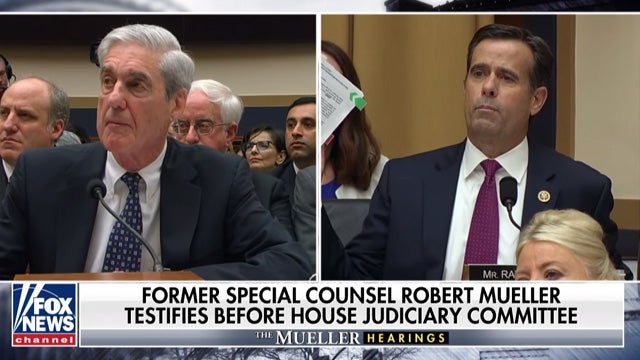 RUSH: Are you in his district?

RUSH: Well, I’d be very proud if I were you, too, because you’re right. He was great today. I appreciate your call. We just happen to have the audio sound bites of John Ratcliffe. He was elected to Congress in 2014, so he’s in his third term now. He was talking here to Mueller. We have two sound bites. This whole idea of, you know, whether or not the Department of Justice can “exonerate” people, Ratcliffe just blew this out of the water with Mueller. Here’s the first of two sound bites.

RATCLIFFE: Can you give me an example other than Donald Trump where the Justice Department determined that an investigated person was “not exonerated” —

RATCLIFFE: — because their innocence was not conclusively determined?

RATCLIFFE: Okay. Well, you can’t. Time is short. I’ve got five minutes. Let’s just leave it at you can’t find it, because I’ll tell you why: It doesn’t exist.

RUSH: Let me explain what this is again. This is something that I think if you’re not taught Criminal Justice 101, you’re not gonna understand this. Like some people don’t understand the difference in court between “innocent” and “not guilty.” Have you ever noticed that there is no such plea as “innocent” in a courtroom? Do you know why? Because that’s not what is determined. (impression) “Yes, it is, Rush! You’re either guilty or innocent.” No! Innocence is not what they’re pursuing. That’s not how it works.

Scumbag B does not have to prove a damn thing. It is up to the prosecutor to prove that Scumbag B did it! Now, oftentimes in a trial the defense attorney will say, “Our best defense here is to find the other perp, find the real perp, find out that you didn’t do it.” But in terms of the prosecution, they must prove the perp did it to the satisfaction of the jury, otherwise the verdict is gonna be “not guilty.” It doesn’t mean the perp didn’t do it. It means Scumbag B… It means the prosecutor couldn’t convince the jury that Scumbag B did it.

So the verdict is not guilty. Scumbag B stands up and cheers, hugs his lawyer, walks out of there. He may have done the crime! He didn’t have to prove he didn’t do it! He has not been exonerated! In terms of the legal system, he’s not been exonerated, because that’s not a part of American criminal jurisprudence. There’s no such thing as exonerating somebody. Now, the media or others who don’t know what’s going on will say, “That’s the practical result.

“Such-and-such today was exonerated of the allegation that Scumbag B murdered Scumbag C,” but that’s not what happened. The jury found Scumbag B not guilty because the prosecutor wasn’t able to prove it. Now, in a case like that… Let’s give another case. Let’s say that a prosecutor has evidence against Scumbag B, but he doesn’t think it’s enough to get a verdict. So he’s unwilling to go to trial, because he’s not confident he can convince the jury that Scumbag B did it. So he declines to prosecute. Scumbag B walks free.

The prosecutor does not get to go out, call a press conference, and say, “Here’s what we think Scumbag B did, and this is why we can’t exonerate him. But we can’t charge on him because we don’t have the evidence.” That doesn’t happen! If that happens, Scumbag B has the biggest lawsuit for defamation you have ever seen, and this is what Mueller has done! Mueller has not charged Trump with anything, and wrote an entire 200-plus page volume 2 on obstruction explaining why he thinks Trump did it! This is a violation of American Jurisprudence 101! 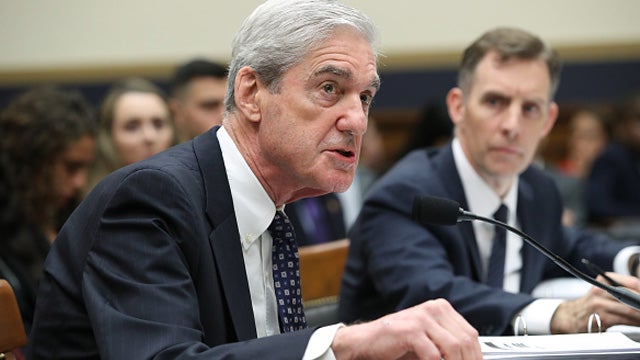 And there isn’t another example of it like Ratcliffe was pointing out! There isn’t anybody else who has, quote-unquote, “been exonerated”! CNN’s still running that headline, “Mueller: Trump Not Exonerated.” Nobody ever is! This is a crucial, crucial thing because Mueller is allowing media allies and Democrats to continue this illusion that Trump is guilty; they just couldn’t prove it! Or, in this case, they can’t charge him with it because he’s sitting president. That’s not even true! Mueller has admitted that had nothing to with it! He has had to change the record from his lying testimony this morning!

But if you charge Scumbag B with something and you can’t prove it, you do not then get to go out, conduct a press conference, and tell everybody what’s Scumbag B did! You have to tell that in court as you’re charging Scumbag B! Then the jury gets to decide, and Scumbag B gets to put on a defense. Now, Scumbag B and his legal team may seek to exonerate him by finding other perps or contradictory evidence. It depends on the defense lawyer and the strategy. This is why, folks, the rule of thumb is that a defendant never testifies. 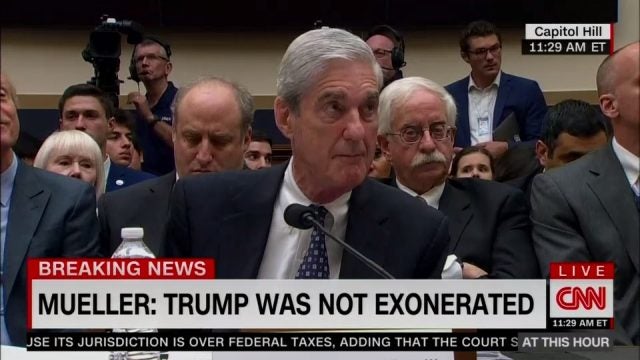 “Just sit there at the table and look not guilty.” If you let ’em testify, then they get to get cross-examined then the prosecutor gets to come in and wreak havoc. So that’s why the rule of thumb is that defendants do not testify. Sometimes the case is so forlorn, sometimes the case is so far gone that Scumbag B does have to testify, take the risk of doing it, take the risk of cross-examination. But here we’re talking about somebody that hasn’t been charged, Donald Trump, who nevertheless has to deal with this guy, Mueller and his team, writing a 200-page piece of BS on obstruction of justice that did not happen, that they can’t him charge with!

They have… In other words, they have attempted to create the illusion that Trump is guilty, and they haven’t been able to convince the American people of it despite Mueller’s stupid-ass report! So now what they’re seeking to do is get Mueller to add to this so that he can trigger Congress doing an impeachment. That’s what all of this is. The Democrats are trying to create the illusion that Trump did something he didn’t do, that he committed crimes he didn’t commit, that he committed crimes that have not been charged, because they’re so obsessed now with the fact that Trump’s gotta go that they can’t get him. They’re long gone beyond reason.

By the way, here’s the second Ratcliffe sound bite after pointing out that Mueller cannot name anybody else in our criminal justice system who has been “exonerated.” This is the second bite… 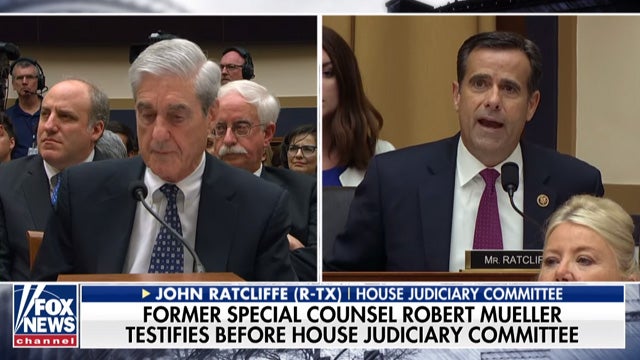 RUSH: Except Trump isn’t. Trump isn’t entitled to it. Trump’s presumed to be guilty, but they just can’t find the evidence. Trump is presumed to be guilty! Oh, by the way, Schiff says, “We do have the evidence. The evidence of collusion’s right in the report! It’s been hiding there all day.” This is why Trump’s frustrated. He’s had 2-1/2 years facing this stuff. He didn’t do it. There’s no evidence he ever did, and the media and the Democrats and Mueller and his team have created the illusion that Trump is guilty as sin and they just can’t charge him because he’s a sitting president.

RUSH: This is Republican Congressman Mike Turner explaining to Mueller that he has no power to exonerate anybody.

TURNER: Mr. Mueller, you can’t be exonerated. In fact, in our criminal justice system there is no power or authority to exonerate. This is my concern, Mr. Mueller. This is the headline on all of the news channels while you were testifying today: “Mueller: Trump Was Not Exonerated.” Now, Mr. Mueller, what you know is that this can’t say “Mueller Exonerated Trump,” ’cause you don’t have the power or authority to exonerate Trump. You have no more power to declare him exonerated than you have the power to declare him Anderson Cooper. So the problem that I have here is that since there’s no one in the criminal justice system that has that power… The president pardons, he doesn’t exonerate. Courts and juries don’t declare “innocent.” They declare “not guilty.” They don’t even declare exoneration!

RUSH: This is important because CNN has been having that headline up all day. “Mueller: We Did Not Exonerate Trump.” By the way, they know what they’re doing at CNN. They know how they’re lying through their teeth about this. They know they’re creating the illusion that Trump’s guilty, but that Mueller couldn’t find the evidence. Now, I find it fascinating. Here we have this august, impeccable man of honor from the Department of Justice having to have Jurisprudence 101 explained to him by members of Congress. This is just…

To me, it’s embarrassing.

But it is happening and it’s worthwhile.