Trump Calls Out Democrats for Who They Are

RUSH: I mentioned earlier that the president was gonna be talking to the press today. He was, but it was not a press conference. It was a cabinet meeting. As Trump is wont to do, he lets the press in there for a while for a gaggle and they ask questions that he answers. We got two sound bites here. He spoke to reporters. First question (impression): “Mr. President, you have said that Democrat congresswomen should leave if they’re not happy. Where should they go?”

Now, this question is insolence and disrespect. It is snarky. This reporter knows full well what the president said. Now, don’t misunderstand. I’m not saying this to protect Trump. Trump can handle himself far better than most people in this situation. I’m just pointing out the media to you here. (snarky) “Mr. President! Mr. President! You said that these congresswomen should leave if they’re not happy. Where should they go?” Here’s how Trump swatted it away… 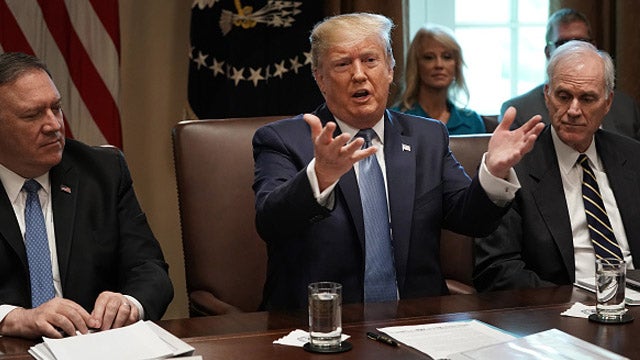 RUSH: Right. Now, some people might say the president’s backing off here. “What do you mean, they can stay? You said they should leave.” He’s basically saying… He’s just calling them out, folks. The bottom line here is he’s calling them out on who they are and what they’ve said. That’s all he’s doing. It happens in politics every day! Why’s he not allowed to do it? “Well, Mr. Limbaugh, because the president is supposed to be the president of all the people.”

Oh, like Obama was the president of all the people? “Yes, exactly! That’s right.” Obama was not the president of all the people. Obama was more divisive than Trump could ever hope to be, on purpose. Trump is not trying to be divisive. Now, he’s tweaking these babes, and when he says, “They can leave; they can stay. But they should love our country, and they should work for the good of our country,” their instant fallback is (impression), “We do love this country.

If they really love this country, they would understand America and its founding and its ideals and what’s unique about it. That’s not of interest to them. Tearing it down is their objective. Next question, unidentified reporter: “Mr. Trump, are you willing to not use the phrase ‘go back to your country’ to citizens and women of color who are either citizens or who have been born in this country? Would you be willing to not use that?” 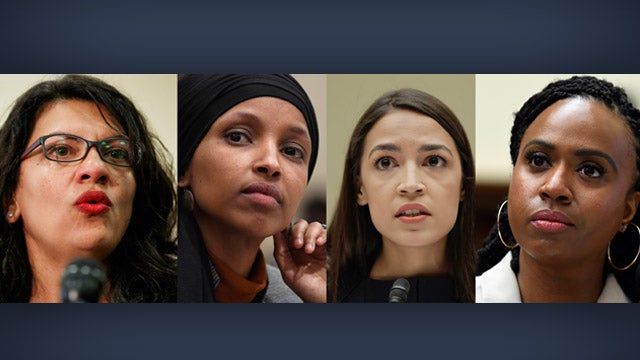 THE PRESIDENT: I think it’s terrible when people speak to badly about our country, when people speak so horribly. I have a list of things here. I’m not gonna bore you with it, because you would be bored. You wouldn’t write it anyway. But I have a list of things here said by the congresswomen that is so bad, so horrible that I almost don’t want to read it, it’s so bad. I think what you do, you have the same list that I do. You should repeat some of that. When the Democrats didn’t want to mention the name of the congresswoman, not so long ago… And what they did in the way they’re treating Israel is a disgrace. But not only Israel, it’s what they say about our country. It’s my opinion they hate our country, and that’s not good. It’s not acceptable!

RUSH: So, you see, one of the big bugaboos here for the Drive-Bys is (impression), “Mr. President, they were born in this country. They are Americans! You telling them to go back where they’re from,” and everybody knows what Trump means. In the case of Ilhan Omar, it’s go back to Somalia. Rashid Tlaib? Go somewhere in the Middle East, wherever it is, where her proud heritage is. The bottom line here is, what he’s talking about, when Ilhan Omar launched into her anti-Israel, anti-Semitic hate, there was a toothless, faceless resolution against it which didn’t even mention her name that the Democrats were responsible for.

It didn’t even mention her name. It was toothless and gutless, trying to paper it over, cover it up.