RUSH: The Stand Up for Betsy Ross T-shirts continue to be sold. They continue to race out of our fulfillment center. It is gonna be going on at least all this week. Fulfillment is underway. Be patient for yours to arrive.

In four days time, we turned around and designed and manufactured the T-shirt, Stand Up for Betsy Ross T-shirt with the original Betsy Ross flag properly aged as the graphic with my unique signature underneath. And we tied the sale of the Betsy Ross T-shirts in with a great charity, the Tunnel to Towers Foundation, which benefits survivors and families from 9/11, first responders and the U.S. military. It was not a strict pursuit of profit here on the part of the EIB Network.

We put these on sale the RushLimbaugh.com store, and immediately there were 20 knockoffs that we noticed, 20 people attempting to make it look like the T-shirts they were selling were authenticated and authorized by me, which they weren’t. We’re now up to 170 knockoffs. The T-shirts are continuing to fly off the shelves.

Our vendor, our manufacturer is outside Pittsburgh, and they have had to bring on additional employees in order to meet the demand of shirts we need to fulfill orders. I’m still unable to divulge numbers. There are some reasons for this. I feel very hamstrung being unable to do this ’cause it would dazzle you, it would blow you away. Suffice to say that there is no other item in our store in history that has even come close to this, and our store is fairly successful.

So 179 knockoffs, 170 different websites attempting to convince people that the official shirt can be had through their website, but there is no charitable tie in. The thing to keep in mind is if you want one of these, the only official one is at RushLimbaugh.com at our store. If you purchased and are awaiting delivery, be patient. We have round the clock fulfillment going on.

The reason I’m telling you this is not to keep the sales going because that’s happening anyway. I’m telling you this because there’s obviously a sentiment for pushback out there that people want to get in on. This is one of the ways that they can and at the same time donate to a great charity and end up with a T-shirt which, by the way, has some of the finest fabric you’ve ever put on your body as a T-shirt. A few complaints from the cotton industry, but you can’t make everybody happy, folks, when you get into these endeavors. But we are thrilled and we are ecstatic and just blown away by the demand and the response to this.

So I just wanted to let you know that it’s still hopping, it’s still cooking, it’s alive and well. Your orders are being fulfilled and shipped as quickly as can be. And the desire to push back, you know, shortly after the Betsy Ross snafu here came Megan Rapinoe and the U.S. female soccer team winning the World Cup, and they start trashing America. And so it was made to order for that. And now here comes The Squad, and these assaults on this country just don’t let up!

And these assaults on the country are now openly coming from the Democrat Party. Whatever you think of Trump’s strategy here or lack of strategy, whatever you think of what Trump said or did and how he said it and how he did it, tweeted it or whatever, the fact of the matter is that all of this opposition to America is being clearly identified with the Democrat Party. We’ve got these four freshman congresswomen that can’t wait to soak up all this attention. They love it. 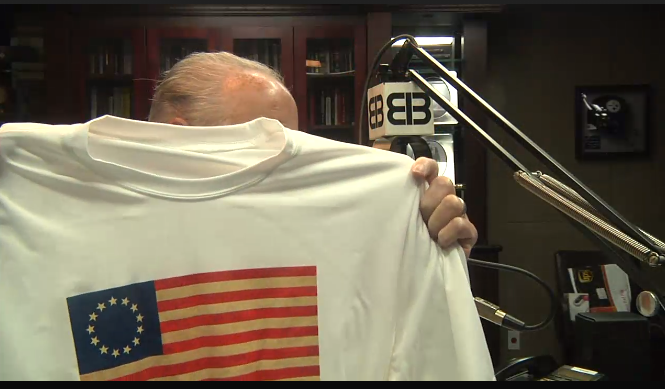 They’re calling press conferences. They’re calling themselves The Squad. They are loving trashing Trump and the country under the guise of loving the country and wanting to improve it. There isn’t a single thing they’re doing that’s gonna improve this country, not a single thing, folks. Everything they’re doing is designed to undermine the traditions, foundations, and institutions of this country’s founding.

We’re not putting children in cages, and we’re not separating families because Trump hates families. We’re not doing anything of the sort. We are executing existing illegal immigration law and policy. And there haven’t been too many Republicans prior to Trump who have ever done this.

Look at what the simple imposition of the law, the enforcement of the law is causing these Democrats to come unglued over. Enforcing the law is driving them nuts. That’s not a simplification, and it’s not overly complicated.