Did Trump Drive Paul Ryan Out of the Swamp?

RUSH: A new book has been leaked, book coming later this month by a guy named Tim Alberta, who I guess he’s a Politico writer. And it’s a book about the campaign of 2016, one of the excerpted chapters is how Trump survived the Access Hollywood video. 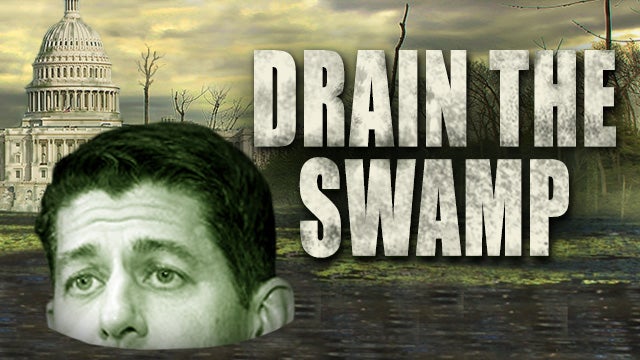 A lot of people talked to Tim Alberta, and one of them was Paul Ryan, and Paul Ryan is admitting — correct me if I’m wrong, Mr. Snerdley — Ryan is admitting he resigned from Congress ’cause he couldn’t work with Trump anymore. That’s what it sounds like to me.

RUSH: I referenced this earlier. There is a book coming out in the middle of the month, it may be soon, by Tim Alberta of Politico. And it’s a book about the 2016 Trump campaign. And one of the stories is an excerpt chapter of the day the NBC Access Hollywood video was released. And it is a good read.

If it’s true — and I think a lot of it probably is – it’s a minute-by-minute recitation of what happened in the Trump campaign at 4 p.m. It was two days before the last debate between Trump and Hillary. The Washington Post, 4 o’clock on their website, published the Access Hollywood video. And there was a gigantic meeting of the Trump campaign committee at Trump Tower when this thing was released.

And the chapter in the book details exactly what happened when everybody became aware. The book says that not a single person in the Trump campaign thought he could survive it. Reince Priebus thought, That’s it. This is over. There’s no coming back from this. That seemed to be a universal opinion.

Trump was saying, “I don’t remember saying this.” Then the video came, “Yeah, that’s me, I have to admit, I don’t know.” The only person who thought, according to this book, that it wasn’t that bad and could be survivable was Jared Kushner.

Now, I remember — this is not in the book — but I remember when this happened I was infuriated. It was the October Surprise of all October Surprises. And I was just mad as I could be, not at Trump. I was mad that this stuff works.

So for the first time in the campaign, I fired off an email, and I sent it to Hope Hicks. And she was in this meeting. And in the email I basically said to her what I just said to you. I said, “Whatever you do, don’t cave to this. People are fed up with it. This kind of stuff is not gonna work. It’s not gonna work against Trump. Please don’t cave to it.”

And then I got a “thank you” response from Kellyanne Conway. And what happened was Trump, according to the book, told everybody that it’s full speed ahead, business as usual. “I’m not reacting to this. I’m not getting out of the race.”

And the calls were all — if you remember, Republicans that hated Trump, who had gotten on board by that time, he was the nominee, they had no choice, but they hated him, and they were all over TV gleefully saying, “It’s time to stand aside. It’s time to let somebody run and lose.”

Nobody at the time thought Trump was gonna win anyway, and when the Access Hollywood video came, they thought it was the nail in the coffin, and so they wanted Trump to get out of there and they could put somebody up that might have a chance of winning but if somebody lost it could be explainable and it wouldn’t ruin that person’s career ‘cause it would be a no-win situation.

And they were thinking about maybe putting Pence in there since, you know, we’re not gonna win anyway. Let’s have somebody who losing doesn’t hurt us. And Trump refused to play along with any of it. And, if you remember that debate, Trump came out firing both barrels at Hillary on all the illegal stuff she had done, and it was at that debate where Trump told her — she made some snarky comment about how when she’s president, she couldn’t wait to be in charge of the Justice Department. 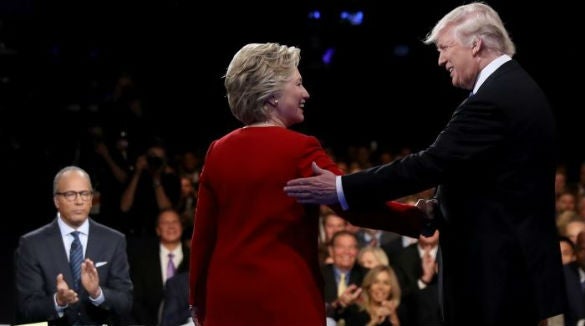 His response was, I can’t, either, ’cause the first thing I’m gonna do is put you in jail. Do you remember that? Trump thinks that debate is where he won the presidency and overcame this Access Hollywood thing. And that incident I guarantee you will be in political science textbooks from now ’til the end of time. Because that was the October Surprise of all October Surprises. They laid in wait for it. It was meant to take Trump out.

They waited until it would destroy the whole party, not just Trump. They waited until he was the nominee, they waited ’til it was three weeks before the election. And I remember how livid I was at this whole scam. And I had people saying to me at the time, “Were you not upset about what Trump had said?” It was Donald Trump years ago bragging to Billy Bush on an Access Hollywood videotape. This is the exact kind of thing they use to deny us, and I’m tired of them trying to manipulate our voters. That was my whole point.

This story’s in TheHill.com: “Paul Ryan Saw Retirement As An ‘Escape Hatch’ From Trump.” Paul Ryan, an early critic of Trump’s who ultimately fell mostly in line with supporting the president’s agenda and rhetoric, said he saw retirement as his “escape hatch.”

Oh, here it is. American Carnage is the name of the book. A copy the book was obtained by the Washington Post — of course it was — ahead of its release. They quote Ryan as saying, “I told myself I gotta have a relationship with this guy to help him get his mind right. Because, I’m telling you, he didn’t know anything about government . . . I wanted to scold him all the time.”

On one occasion, Tim Alberta reports, Trump finally gave in to signing a 2018 spending bill that did not include funding for the border wall only after Paul Ryan agreed to give him time to build suspense on Twitter. On another occasion, Ryan broke into a maniacal punch drunk laughter after Reince Priebus called him early one Saturday to ask about Trump’s tweet accusing the Obama administration of tapping his phone during the election.

Ryan thought that was insane, started laughing uncontrollably that Trump would make such a wild allegation. Now we know that it was true! Anyway, the book says that Ryan said he could not stand another two years working with Trump in office. He had to get out of there.

RUSH: By the way, that debate between Trump and Hillary after the Access Hollywood video came out, that’s the debate where Trump brought all of the women, victims of Clinton abuse, and put ’em in the front row in the debate. He was the one person in his campaign that didn’t stand down, had a plan to react to it. It was classic. It was just classic.