Your Host, Kaepernick, Nike — and China

RUSH: Now to the Kaepernick situation specifically. Now, Mike, on this, we’re gonna do sound bites 1 and 2 and then we’re gonna jump to 21 and 22. We start out… This is Griff Jenkins this morning on Fox & Friends. He is filling in today for somebody. They conned Griff Jenkins into working today so that some of the regular hosts could get a day off at Fox & Friends. They introduce a clip of me talking about Nike’s decision to pull the Betsy Ross shoes because Kaepernick doesn’t like this.

JENKINS: Colin Kaepernick has a problem. I’ll tell you who else has a problem with this story is Rush Limbaugh. Here is what he had to say… 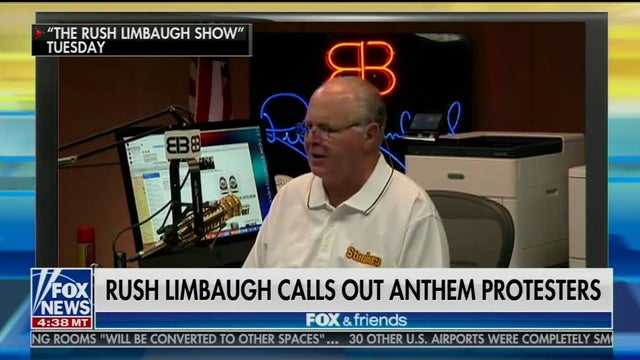 RUSH ARCHIVE: Did he not tell us that he was kneeling to protest police brutally? Did he not tell us this? He did! That’s all it was. He was protesting the fact that the cops were shooting people like him. … It was all about the cops. Except it wasn’t! It was about the flag all along! He was taking a knee because he opposes the country! He opposes the national anthem. He opposes honoring the flag. This proves it! … They always lie to us. They hide so much of their real core. Even when they are in the process of displaying it, they still deceive.

RUSH: They then turn to Brian Kilmeade for instant analysis of your host, El Rushbo.

RUSH: So Kilmeade with that line of thinking endorsed the points made by your beloved host. Now, the Nike decision is related in part to Kaepernick’s claim that the Betsy Ross flag was designed and deployed at a time the nation had slavery, and so the Betsy Ross flag is a symbol of slavery and the celebration of slavery — and, as such, that flag needs to come down. It’s not a celebration of slavery, but that’s how they want to cast it.

But think about this. You’ve no doubt heard over the years the stories of where and how Nike (what do you call them, sneakers, tennis shoes, Air Jordans) are made. They’re made in sweatshops in the jungles of Asia. The people that make these shoes are actual slaves. They work seven days a week. They work for veritable peanuts. They are youths in many cases, and they are paid practically nothing. They kept none of the spoils of the profits generated by the sale. So here’s this shoe outfit. Look, labor costs are the number one costs for any business and particularly a manufacturing business.

Labor costs are at the top. Every business wants to reduce ’em. Standard Business Practice 101 for evil capitalists, reduce labor costs. Because it’s the number one costliest item, usually in the P&L statement, the budget. Nike has taken that to the extreme of paying nothing, and these literally are sweatshops! People sweat their lives off in these overheated, close-quarter factories. It’s been documented — and note that there’s no concern for that, that Nike…

Even though this is well known and gets talked about now and then, it never fully attaches to Nike or any other manufacturer using similar people, pay scales, working conditions. It never attaches to them for any length of time. Now we move to later in the day on the Fox News Channel. This morning Bill Hemmer has as his guest the new senator from Missouri, Josh Hawley. We have two bites with Hemmer also introducing a sound bite of me from yesterday’s program and asking Senator Hawley to react to it…

HEMMER: Nike facing some kind of backlash for pulling its Fourth of July sneakers from the shelves. We’ll speak with the Republican slamming that decision — leading the way, in fact. He’s next 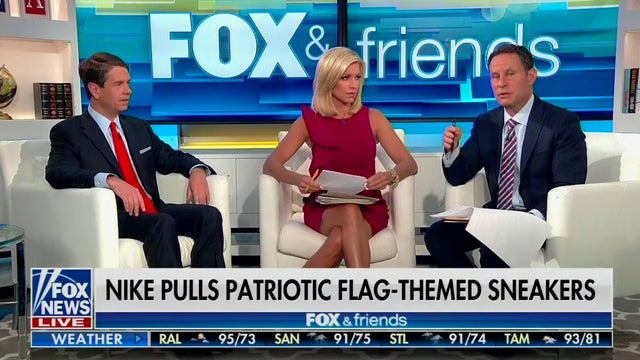 RUSH ARCHIVE: Make no mistake about it. Colin Kaepernick and his behavior and Nike going along with him, in my estimation, is flat-out un-American. It’s anti-America, let’s put it that way.

RUSH: Yeah, I used un-American a couple of times. It’s anti-American, is what it is, and that’s inarguable, as is their reaction to any kind of celebration in Washington tomorrow. (impression) “You can’t do that! You can’t politicize the Fourth of July!” They’re wanting equal time. Equal time for what? You know, a Democrat makes a speech, a Republican makes a speech/State of the Union. Yeah, we give equal time to the other party. (chuckles) What is the equal time to celebrating the founding of freedom in the United States?

Opposition to it. So after playing that quite cogent sound bite where Nike and Kaepernick are actually behaving as anti-Americans, Bill Hemmer said to Josh Hawley, Republican of Missouri, “You’ve said, Senator Hawley, that Nike is a symbol of everything wrong with the corporate economy. They take advantage of our laws, but they send jobs overseas, sweatshop wages, partner with aggressive regimes, aggressively avoid paying any U.S. taxes — and then they tell Americans to shut up and buy their stuff. Enough said?”

HAWLEY: It’s terrible, Bill, what they’re doing here. Betsy Ross, let’s not forget, was an independent businesswoman who had her own shop in Philadelphia who designed our nation’s first flag, who sewed our nation’s first flag. I mean, she’s truly a founding measure. I mean, this is something that the best of America, and this is controversial to Nike? But, meanwhile, Nike’s still willing to make a buck in China! They’re still willing to partner with an authoritarian, repressive regime. They want the money in China.

That’s why they’re willing to take direction from the Chinese Communist Party. I’m mean, let’s not forget Nike just pulled a design in the Chinese market because the Chinese market didn’t like that the designer of a pro-democracy activist. So they’re all about where they can make a quick buck — and let’s be honest, Nike is more and more anti-American. They’re shipping jobs overseas. Now they’re engaging in this kind of anti-American activity. I mean, it’s really… It’s a shame to see. 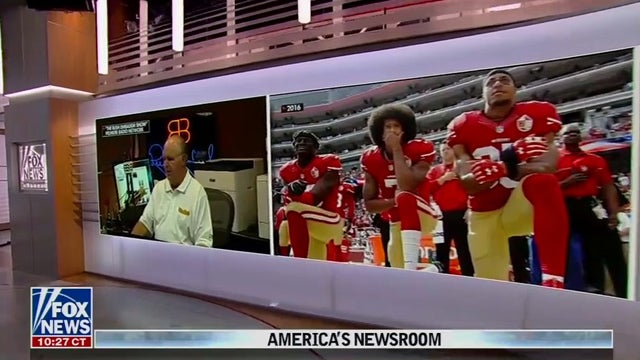 RUSH: That reminds me. I’ve got something here in The Stack. Hawley talking about the ChiComs and how rotten they are. I read something on one of my tech blogs, and I printed it out, and I’m looking for it right now. I want to find this for you. It’s about a really obscene practice that the ChiComs have recently implemented. (shuffling papes) Where did I put this? Stick with me here, folks. I know I… Here it is! Here it is. The original report here is from a blog site, website called Motherboard, and here is the summary of the details:

“Foreigners crossing certain [ChiCom] borders into the Xinjiang region…” It’s probably “Zing-yang.” I just called it “Ying-yang” to Americanize it. “Foreigners crossing certain Chinese borders into the Xinjiang region, where authorities are conducting a massive campaign of surveillance and oppression against the local Muslim population, are being forced to install a piece of malware on their phones that gives all of their text messages as well as other pieces of data to [ChiCom] authorities, a collaboration by Motherboard,” a German publication, the U.K “Guardian, the New York Times, and the German public broadcaster NDR has found.”

So because of a crackdown on Muslims in China, anybody crossing the border into China in the Xinjiang region, authorities are stopping and putting malware on their phones so that they can be tracked, including their text messages, their location, and all that. Okay. So this has been reported. So I wanted to find tech blog reaction to this, ’cause these people hate Donald Trump. These people think Donald Trump is the worst scum on earth. So here’s a typical reaction: “Well, what do you expect going into China?”

As though, “Hey, it’s China! Nothing you can do about it!” Do these people not realize…? This actually is one of my subpoints of the day. You know, not realizing early enough where we are head and toward where we are trending. Google! Google totally changes their operations to do business with China. China basically runs Google search in China. The ChiCom government determines what will be returned on any search of Google in China. Google says, “Eh! Well, you know, if we want to do business in China; we gotta follow the local laws.”

So the ChiComs? Nothing wrong with the ChiComs! But, boy, these people hate Donald Trump — and, boy, these people hate Republican. You listen to them talk about Republicans. (impression) “Republicans are dumb, stupid. They are oppressors. They want to deny people civil rights! They want to deny people human rights. Republicans are mean-spirited racist, sexist, bigot, homophobes.” But, hey, you know, it’s China. What are you gonna do?

I mean, if these people really believe in their hearts — if they’re really human rights activist and civil libertarians — don’t they oppose it everywhere? And if they see it happening in China, “Eh! Well, it’s China. What do you expect?” And then out of the next corner of their mouths we get a diatribe on what a rotten SOB Donald Trump is, and how dangerous he is, how stupid he is. If you don’t stand up against this stuff, even if you’re not gonna do anything about it… I mean, people standing up against ChiComs in America, I know, is not gonna stop the ChiComs. But you gotta be consistent don’t you?

If you hate this kind of suppression, you gotta stand up against it. “Oh, I don’t know. Google needs to do business in China. They’ve gotta obey the laws of where they are. You can’t just… You can’t push back against the ChiComs.” Oh, really? Now, what if this kind of stuff…? What if we ever elect somebody in this country that wants to do the same kind of thing? What happens if the governor of California decides that if you cross the border into California, you gotta surrender your phone so they can put malware on it to follow you wherever you go, especially if you’re Republican? 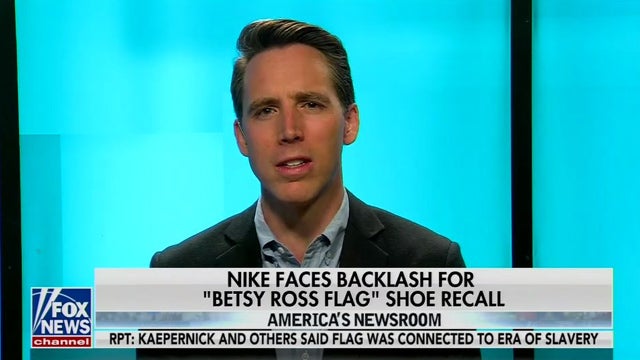 You say, “Aw, come on, Rush! It’ll never happen. You do not take a story of what’s happening in China, Rush, and then extrapolate it to what… Of course we can’t! It would never happen in the United States.” How much stuff happening today is stuff you said 30 years ago would never happen in the United States? The more Gavin Newsom talks, folks — and you combine it with what I think really motivates them: outright, sheer hatred for us.

As far as they’re concerned, we are the greatest threat to their existence anywhere in the world. American conservatives and Republicans and the greatest threat to your domestic left that they think they face. So, yeah. “Rush, it would never happen. They couldn’t get away with it. There are federal laws against it. You can’t just grab somebody’s phone and put malware on it and follow people around.” Yeah, sanctuary cities aren’t legal, either — and coming into the country isn’t legal, either. There’s a whole lot of stuff you can’t do that everybody’s doing every day.

No, I’m not predicting that any governor of California… What I’m trying to point out here is these holier-than-thou left-wing human rights/civil rights activists, when the ChiComs or some communist government does exactly what they oppose, they shrug and they look away and say, “Well, that’s China. What are you gonna do?” It’s that kind of attitude that makes it possible. So if a Democrat came along, by the way, and wanted to do something like that, who’s to say there wouldn’t be a bunch of Democrats saying, “You know what? If a Democrat’s doing it, it’s a good idea. A good idea! It may need to be done. Track Republicans.”