Arizona Governor Ducey Stands Up to Nike and Kaepernick

RUSH: Doug Ducey, the governor of Arizona. And this is about Kaepernick. And, folks, remember now, Kaepernick said that he was protesting and kneeling because of cops shooting minorities. And we all said, (impression) “No, he’s not, this is not about the cops. He’s kneeling because he doesn’t like the anthem, he’s kneeling because he didn’t like the flag.” So now Nike comes out with a new shoe honoring Betsy Ross, the designer of the first flag. He says, (impression) “Screw this. I’m not wearing that shoe. I don’t get anybody…” Nike canceled the shoe, after having a whole bunch of them made and in inventory. So here’s Colin Kaepernick, well-known leftist, trashing and tarnishing one of the early famous women in American history, Betsy Ross, and Nike going along with it.

So Doug Ducey, Republican governor, Arizona, tweeted, (paraphrasing) “Today was supposed to be a good day in Arizona with the announcement of a major Nike investment in Goodyear, Arizona. And then this news broke yesterday afternoon. Words cannot express my disappointment of this terrible decision. I am embarrassed for Nike,” said Governor Ducey. “Nike is an iconic American brand and American company. This country, our system of government, and free enterprise has allowed them to prosper and flourish. And so has cheap minority slave labor in Asia. Instead of celebrating American history this week of our nation’s independence, Nike has apparently decided that Betsy Ross is unworthy and has bowed to the current onslaught of political correctness and historical revisionism from a failed NFL quarterback.” I added those words, not Governor Ducey. 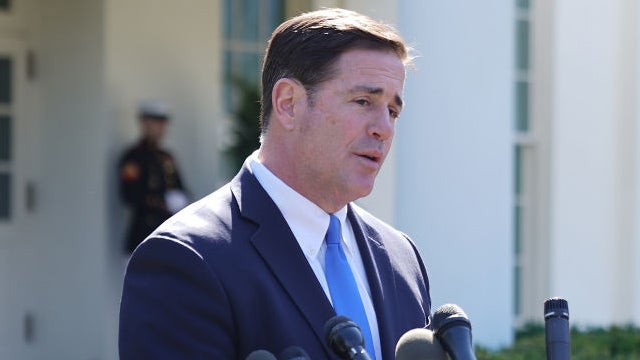 (paraphrasing) “It is a shameful retreat for Nike. American businesses should be proud of our country’s history, not abandoning it. Nike’s made its decision. Now we’re making ours. I have ordered the Arizona Commerce Authority to withdraw all financial incentive dollars under their discretion that the state was providing for Nike to locate here. Arizona’s economy is doing just fine without Nike. We don’t need to suck up to companies that consciously denigrate our nation’s history.” Congratulations, Governor Ducey. Bravo. You’ve been wondering where the Republicans are the past two weeks. Trump’s out there on his own fighting this battle all by himself. Turtle has not even been out. I don’t know where anybody is. There nobody to be found. There aren’t any joint press conferences supporting and backing up the president. Governor Ducey piped up. He said finally (paraphrasing) “It shouldn’t take a controversy over our shoes for our kids to know who Betsy Ross is, a founding mother. Her story should be taught in all American schools. In the meantime, it’s worth Googling her.”

Or check out Rush Revere any time. My friends, Doug Ducey has guts here. And he is withdrawing Arizona incentives, tax incentives given to Nike in order to get them to locate to Arizona. This is just another lesson in why state tax incentives may be bad policy. Arizona picks Nike, Nike makes Betsy Ross flag shoes, Colin Kaepernick, a failed NFL quarterback, opposes the shoe. One guy who Nike made a lot of money with some stupid advertising campaign. So Nike pulls the Betsy Ross flag shoes. Arizona governor then pulls back on the incentives. But what this really is, is a Republican governor actually standing up to this. He’s one of few who do. So if you’re gonna Google search “Republicans who stand up,” you’ll find at least one name, Arizona Governor Doug Ducey.