Have We Reached the End of Plugs Biden?

RUSH: Let’s go to the audio sound bites. I want to start getting some of these in. I just want to go back and get it firmly established with me on the record as being one of the early predictors of what was going to happen to Joe Biden. I want to go back to May 1st right here on this program.

RUSH ARCHIVE: I’m gonna whisper this to you ’cause I don’t want — you just keep this between you and me, okay? Turn your radios up a little bit so you can hear this, ’cause I don’t want this to get out. Don’t anybody tweet this. Don’t anybody put it on Facebook. But old Joe is not gonna be able to handle the rigors. It ain’t gonna be long, folks, gonna have to pull out, just not gonna be able.

RUSH: And that process has now begun. You saw it. They launched Kamala Harris and some of the others launching on Biden last night. Remember, now, Good Morning America has run a hit piece on Biden and his son Hunter and the crazy deals that Hunter and Joe Biden made with the ChiComs and Ukraine. Last week I reminded everybody the media had figured out Biden cannot keep up and the process of taking him out had begun.

RUSH ARCHIVE: I think the compulsion that the Democrats have to get rid of Trump overrides everything right now. And every assessment they’re making is, “Can this succeed in getting rid of Trump?” So they look at Biden, “Can Biden beat Trump?” I think more and more of them are concluding “no.” And yet Biden is the frontrunner by a big stretch.

So what are they gonna do? They don’t want to sit around and wait for Biden to implode. That might take too long. They want to hasten it. I believe they’re trying to hasten Biden’s exit from the stage, is my personal opinion. ‘Cause I think they have concluded properly that he can’t win! He can’t keep up with Trump in a campaign. It’d be Hillary all over again.

RUSH: And that is really true. So now with those two sound bites establishing that I have long ago predicted what was gonna happen, let’s go to CNN ripping Biden after the debate last night.

NIA-MALIKA HENDERSON: (b-roll noise) You had Biden actually arguing for state’s rights, which is a terrible argument to be making. You know, sort of threw in the towel.

GLORIA BORGER: I can’t figure out what Joe Biden’s strategy was during this debate. Shouldn’t he have been prepared?

TERRY MCAULIFFE: Joe Biden should have been prepared for that question. I don’t know why, when he was answering the question, he stopped and said, “I ran out of time.”

DAVID AXELROD: At times the Vice President seemed somewhat confused to me in handling some of the questions. He actually seemed a bit defensive.

VAN JONES: Tonight, we had a breakdown, Biden. He had the most to lose, and I think he lost it.

She said, “Reverend Jackson, what’s your reaction when you watched that exchange between Biden and Kamala Harris and what you heard Senator Harris say about busing, ‘that little girl was me,’ what did you think of that?”

RUSH: Did you understand that? Well, I have the transcript here. You know, the Reverend Jackson is known for his rhythmic rhyming, his spontaneous improvisational rhyming. He said, “The issue, busing was for racial balance. It was not the bus, that was us. Most children are bused every day, then and now. Rural children are bused. Suburban children are bused. Busing for racial balance became a hot political issue. Louise Day Hicks in Boston, Bobby Fielder in LA. Ed Brook was on one side, Joe was on the other side, Biden’s on the other side. And in my judgment was the wrong side.”

Okay. So that’s answer number one. And she said (paraphrasing), “Reverend Jackson, thank you so much for coming, we’re so fortunate to have you with us, Reverend, so much respect for you and everything you’ve done, Reverend Jackson. Should Joe Biden apologize in your mind?”

JACKSON: When Trump says “Make America Great Again,” he’s talking about state’s rights again. Joe has grown in the positions he has taken. Think about his role with President Obama. His being the balance of that ticket was a factor, I think, to President Obama’s victory in ’08, for example. I think he has grown in the new views of these positions, but clearly you cannot run your shot, and you cannot run through raindrops without getting wet, exalting Clarence Thomas was a big mistake. We hope he’s outgrown those problems. He can survive it, but it’ll be tough sledding. 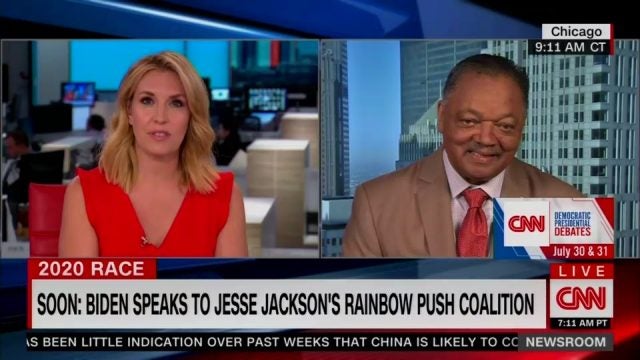 RUSH: So I guess Reverend Jackson’s saying, “Look, you can’t run through raindrops without get wet. And Thomas was a big mistake.” He’s talking about Clarence Thomas, he’s going back to Biden not getting rid of Clarence Thomas and shaming Anita Hill as a bad move. And Trump’s Make America Great Again, he’s talking about states’ rights and Joe’s grown in the positions he’s taken, think about his role with President Obama, balance, factor, Obama victory in ’08, for example.

It’s all making sense to me. Bottom line is that Reverend Jackson thinks that Biden is bumbling and stumbling all through this but that he can survive it. But that it’s gonna be tough sledding. So while they’re out there just, I mean pummeling Joe Biden, they went gaga over Kamala Harris. Audio sound bite number 7. It’s a media montage.

DAVE BRIGGS: She was the star of this debate stage.

GARY TUCHMAN: Harris seems to be the star of this evening.

VAN JONES: Kamala Harris had a moment that was two hours long. A star was born tonight. She will kick Donald Trump’s butt.

RUSH: There you go. She’s already the nominee and will kick Trump’s butt.

RUSH: There’s some question whether Biden even knows he got bruised. Happy to have you along, folks. On three of the most optimistic, most drenched-in-reality, most uplifting broadcast hours you will find in American Media today. Those three hours hosted by me, your guiding light through times of trouble, confusion, murkiness, despair, tumult, chaos, lies, fake news, and even the good times, Rush Limbaugh. 800-282-2882 if you want to be on the program.

Alright. I’m debating how much more time to spend on Plugs here. I’ve gotta do this because I am one of the first to have really not gone very far out on the limb and forecasted and predicted that Plugs would not be long for this campaign. Now, I’m not gonna predict the actual day he will drop out.
And if you remember I’ve given myself an out. I mean, using the Reagan-Mondull example of ’84, there’s strange things that could happen and Plugs could have a reversal of fortunes if things go right. But right now, today, it’s not a good day for Plugs.

STODDARD: I think that he had a terrible night, and I think he has a lot of vulnerabilities that he will be reminded of as we get closer to a six-person debate. He protected the credit card companies, he supported segregation, he is a physical space invader, he laughs about it, that he is not upgraded and updated for these times. 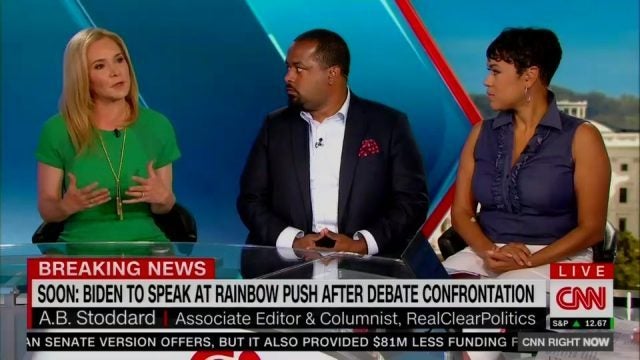 STODDARD: — vulnerabilities. He does not talk about his strength in the race, which is that people are terrified and they want to get rid of President Trump and they believe that Joe Biden is the only person who will be ready to clean up the mess that President Trump has made. He didn’t talk about that last night. He doesn’t say, “This is no time to take a chance. I’m the only one on the stage who can A, B, C, and D.” He just sat there looking terrified of his own 2019 Democratic Party. And if he does that again in the next debate, he’s gonna lose.

RUSH: So that’s a pretty common reaction. Here I have a Politico story, and the headline here is, “Biden dated himself, he underperformed, and was eaten alive.” The four-hour, two-night debate is over. According to our experts, Bernie Sanders was eclipsed, Joe Biden survived maybe a pummeling, and Kamala Harris changed the 2020 race. So that’s basically the take here from The Politico, which is, again, a good harbinger of the Drive-By Media.

RUSH: Look, I got three bites from the debate last night I gotta get to. I’ve also got a couple from Plugs who just finished a rather short speech. He was at the Monochrome Coalition convention/shakedown, sponsored by the Reverend Jackson. By the way, when he was over he hugged the Reverend Jackson, and the Reverend Jackson did not return the hug! Did you see that? (interruption) That’s right. He did not hug him back. Even though Plugs referenced his time in the “Obama-Biden administration.” Anyway, we have those coming up but… (interruption) 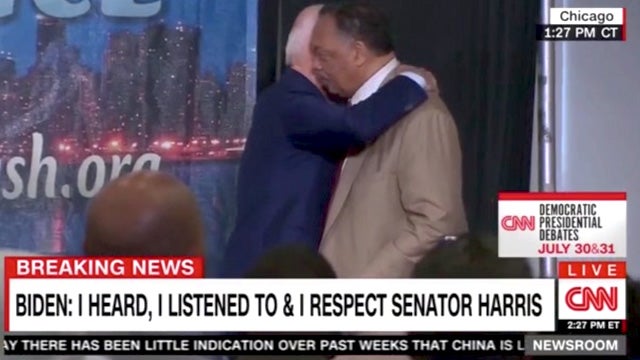 Ailes chose… The Reverend Jackson begged Ailes, “Don’t run that! I didn’t know that the cameras were on. I wouldn’ta said that if I’d a known! Don’t run that,” and Ailes never ran it. It leaked out that it happened, but they never ran. Fox did not run it as a concession to the Reverend Jackson. Look, Jesse Jackson was offended too.

Biden’s out there saying, “Hey, we gotta clean, articulate black for a change in our party!” This is after Jesse Jackson ran in 1988. No, ’84. Jesse Jackson ran in 1984 and Obama comes along, and they act like no black person’s ever run before, including/led by Plugs. He did say, “We got a clean and articulate one here for a change.” Ah. Al Sharpton got ticked off at that. But I’d forgotten the Reverend Jackson did. So, anyway, Jackson did not return the hug.