Democrats Love Suffering So They Can Blame Republicans

RUSH: I’ve got all kinds of montages of the media going on and on and on about the plight of kids. And really what I want to show is there’s nothing new about this. Grab sound bite number 10. This is a montage about the separated children having no soap and having no toothbrushes, and it’s another one of these classic montages where everybody in this montage, countless different media people all say the identical thing.

GEOFF BENNETT: It does not take an act of Congress to get those kids a bar of soap and a toothbrush.

BRIAN WILLIAMS: …lacking soap and toothpaste. The president was asked about these.

LAWRENCE O’DONNELL: …children who have been denied soap and toothbrushes.

DARRELL WEST: …don’t have money for a bar of soap.

GABE GUTIERREZ: …without soap or toothbrushes for days.

For every one of these Millennials who think these Democrats care and these media people care, let me tell you something. They love this circumstance. They love that picture of the dead father and his daughter for the opportunity it gives them. Don’t misunderstand me. I’m not suggesting they are happy that people are dying. They are happy that it happened when Trump’s in the White House so that they can exploit it.

They are happy when they find evidence of suffering anywhere so that they can blame it on Republicans. It is common. It is not new, and it’s not genuine. These people are no different than Sally Struthers going over to Africa while eating a pimento cheese sandwich asking you to send in a buck so the hungry kids behind her could eat.

What are you doing? Give her your sandwich, for crying out loud. Why are you asking us to feed ’em? You’re there. What are you doing about it? It’s the same thing here. The Democrats line up and the media people line up “no soap, no toothpaste.” You’ve got one. Start passing ’em out. You media people have all kinds of soap, all kinds of toothpaste, all kinds of toothbrushes. Your hotel rooms probably provide them for you. Why don’t you go there and get ’em and start passing ’em out instead of lamenting how horrible Trump is.

But, you see, they love the occasion of this stuff so that they can exploit it for political purposes. This is what those of you who are thinking this is something brand-new, you’ve never seen this in this country before, it’s not brand-new. Let’s go back to a montage from 24 years ago. And wait just second. Is this what I think it is? Yeah, 13. But it’s not what I thought it was. It’ll still work. It’s the budget battle of 1995 where the Democrats were accusing the Republicans of starving children. And I only want to share this for those of you to whom you think this is a new low. Why, the United States doesn’t treat people this way.

This effort to blame the United States, I’m weary of it, I’m tired of it. I’ve had to listen to it my whole life. It’s bogus. The United States is the solution to the world problems. We do not cause them. We are not the problem. And I am fed up with these circumstances being exploited and lied about with human suffering being broadcast and amplified with gleeful reporters pointing to it so that they can blame Republicans, in this case Donald Trump or any other Republican or conservative that comes along.

There isn’t a person or place on earth that has eliminated suffering. And yet the Democrat Party wants you to believe that they’re gonna do it, that the only reason we haven’t eliminated suffering is Republicans and specifically Donald Trump. Ask yourself, then, why the degree of suffering in this country is so much greater in places run by Democrats than anywhere else?

Go to Los Angeles, go to Detroit, go to Flint, go to San Francisco, go to inland California, wherever the Democrats run the show, there is increasing poverty, increasing suffering with no solution to it other than to point fingers at Republicans and blame them. People that have nothing to do with it. Then they blame the rich, who are already paying far more in taxes than the rest of the population combined, as not paying their fair share.

REP. THOMAS BARRETT: Why do the Republicans want to take apples and milk away from six-year-olds?

REP. LYNN WOOLSEY: Starving children is not the solution …

REP. LITTLE DICK GEPHARDT: The Republicans are taking food out of the mouths of millions of needy children.

RUSH: That was Ted Kennedy at the end. It was John Lewis: “They’re coming for our children. They’re coming for the poor!” Thomas Barrett: “Why do the Republicans want to take apples and milk away from 6 –” There is nothing new about this, folks. This is standard operating procedure for the American left and the Democrats.

And in most cases they’re lying about it! It isn’t nearly as widespread or as bad as they want you to believe based on a picture or two they have to show you. You’re listening and watching left wing Democrat political activism when you watch the news people cover this so-called story. And there isn’t anything new about it. And what they don’t cover is the actual suffering and misery that goes on in places they control.

Donald Trump was asked about this by Maria Bartiromo in his interview with her this morning on the Fox Business Channel. Her question: “Yesterday the House passed a four-and-a-half-billion-dollar bill for humanitarian aid at the border. Then you’ve got Senator Warren,” Fauxcahontas, “saying she wants to decriminalize border crossings. You were the first to call this a crisis. I went to the border. We saw the position the people are being put in. It was disgusting. What’s your reaction to the four-and-a-half-billion-dollar aid bill?”

THE PRESIDENT: I’m not happy with it because there’s no money for protection. It’s like we’re running hospitals over there now. You know, people are coming up — what people don’t understand is you had separation. Separation’s a terrible thing, of the families. And I said, well, I’m gonna put people together, but there’s gonna be more people coming up. But — it has from that standpoint. And we’ve done a great job. You know, they’ll pick up one little site. We’ve done a much better job than Obama. 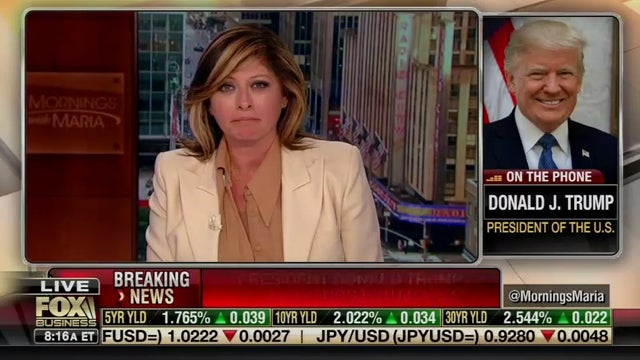 You know, Obama build all those cells. Those cells were built by the Obama administration. He put in all the cages. I remember for a while, they had fun with that, they had me for three days, and then somebody said, “Well, they were built in 2014, they were built by President Obama.” And immediately it stopped. If the Democrats would get rid of the loopholes and would fix asylum, it would take an hour, we could sit down, we could make a deal. They refused to do it, for two reasons. Number one, they want open borders. They legitimately want open borders.

RUSH: And the other thing they want is the issue. They love this. If I could impress upon you Millennials one thing, they love these circumstances for the political opportunity that presents them. And I mean that. I’m not trying to coat it in any way. No. Don’t misunderstand, I’m not saying that they actively love seeing people suffer, because they know these circumstances are gonna get fixed. They know this is gonna get resolved.

There is no mention whatsoever of why these people are coming, who is responsible for their coming, is it responsible or irresponsible to come this way. Nope. There’s just an automatic acceptance that these are all innocent little angels and they’re coming here and Donald Trump is ruining their lives. It’s a shame. We gotta get rid of Donald Trump. That’s all this is.

And the only thing that would make a change is a mass education process on the part of the American people who would no longer fall to this kind of stuff, it would no longer work politically, it would no longer be politically effective, then it would stop. An actual solution. Pelosi doesn’t want this fixed. If Pelosi solves this, then the media doesn’t get to report what they’re reporting the past two days on soap and toothbrushes and the unfortunately, sadly dead father and daughter in the Rio Grande.

If all of this gets fixed, they lose the issue to complain about it! They lose the photo-ops! They lose this or that. They can’t claim they fixed it ’cause they’re not in the White House. They only have the House of Representatives. They don’t have the Senate. So nothing they want is gonna pass. All they can do is stop things. They don’t want it fixed with Trump in the White House this close to the 2020 election. But none of that they tell you.