RUSH: This would be a good time for me to share with you what they’re thinking in California as represented by the governor out there.

In an interview with Politico, California Governor Gavin Newsom — it’s published today – “said the Republican Party is headed for the ‘waste bin of history.’” He pointed out that “California Republicans were once a force, but have seen their power disappear over the last two decades. Washington Republicans will ‘go the same direction — into the waste bin of history, the way Republicans of the nineties have gone. That’s exactly what will happen to this crop of national Republicans.’” 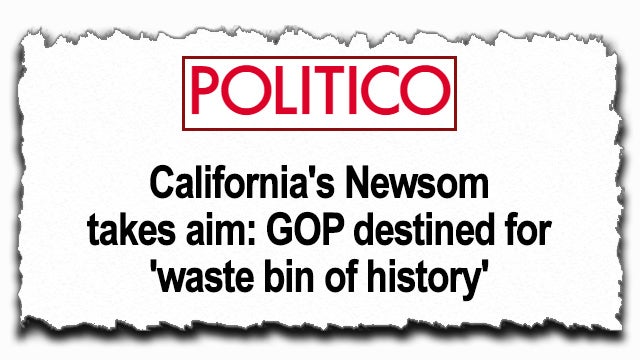 And here’s why he thinks the Republicans lost California. Ready for this? Former Governor Pete Wilson in 1994 pushed for a ballot initiative that would have prohibited illegal immigrants from gaining access to public schools and public health care.

And Governor Newsom says that is when the Republican Party committed suicide — when Pete Wilson tried to get a ballot measure passed denying free education for illegals and health care for illegals, that was the end of the Republican Party. Because the people of California do not want to deny anybody, illegal or not, anything. The poor, the needy, we don’t want them denied at all. And the Republicans of today are doing the exact same thing. They’re seen exactly the same as Pete Wilson was seen, and it’s going to be the end of them.

“America in 2019 is California in the nineties,” said Newsom. And to a lot of us, that’s absolutely true. But we’re kind of at odds with what happened to the Republican Party. We think illegal immigration simply overran the Republican Party with Democrat votes. 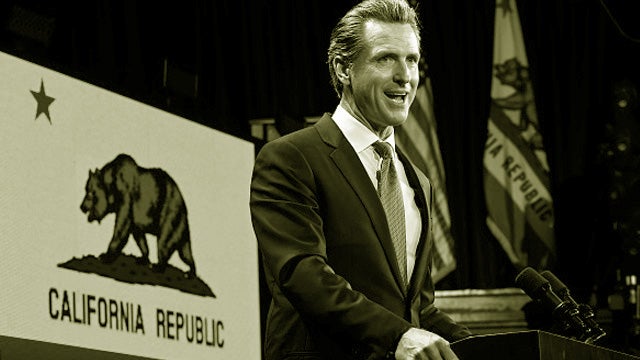 That’s what he thinks. So put that in your socialism versus capitalism hopper and see what comes out of it.

RUSH: By the way, I am reminded of that ballot initiative to deny free health care and free education to illegals. Do you remember what it was called? It was Prop 187, and it passed big time. The people of California voted for it overwhelmingly — and, as usual (just as in previous ballot initiatives that passed), a judge came along and said the people essentially didn’t know what they were doing and threw it out. A ballot initiative is a statewide ballot initiative that you need a certain number of signatures to place on the ballot.

Then the people of the state vote on it. It happens during any election, the nearest election you can get the ballot initiative on. But the people of the state vote for it. It’s a straight up-or-down vote. It’s not attached. It usually becomes attached to parties by virtue of the people that propose it and then end up opposing it. But it’s not on a Republican or Democrat or party slate on the ballot. It’s just there as a standalone — and it passed overwhelmingly. The people of California voted to deny free education, free health care to illegal aliens.

A judge came along and simply swatted it away — and I’m not making it up — basically on the premise it was unconstitutional, and the people didn’t know what they were doing. And that’s what Gavin Newsom says began the end of the Republican Party, Prop 187 winning? How does that happen? How does that signal the end of the Republican Party? I’ll tell you what it did. It told the people of California that they don’t have a say so.

They vote one way — and this was not the first ballot initiative that a federal judge threw out. You know, Howard Jarvis and his numerous property tax — you know, Prop 13 — survived for a while until they found a way to throw a revision of it out. There’s one other famous one that a federal judge threw out and I’m having a mental block what it was. (interruption) Was it the first gay marriage vote? (interruption) What was the number of the prop? What prop number was it? That’s how I remember these things. (interruption) Snerdley’s saying it was a gay marriage vote.

The public — people of California — voted against the gay marriage initiative. The judge came along and threw it out, and once that starts happening, you know, people said, “Well, we don’t…” (interruption) What? (interruption) Prop 8? Prop 8, yeah. That’s what it was. Prop 8. They threw that out, too, and the people then start thinking, “Okay, my voice doesn’t matter. I don’t have a say-so in my government. I vote one way, we overwhelming win these things, and a federal judge comes along (or statewide judge) and tosses it for no legal reason whatsoever other than the judge doesn’t like it?”

And then the governor comes along and says, “Yeah, that’s when you people in the Republicans started losing California. You became xenophobes.” It passed! Overwhelmingly!