RUSH: So, the Drive-By Media today is breathlessly awaiting the next speech, the campaign speech in Iowa. Trump and Floppy Joe are in Iowa together, and Floppy Joe is said to be going to unload on Donald Trump. Seventy-one times he’s gonna mention Trump’s name. He’s gonna call him an existential threat. 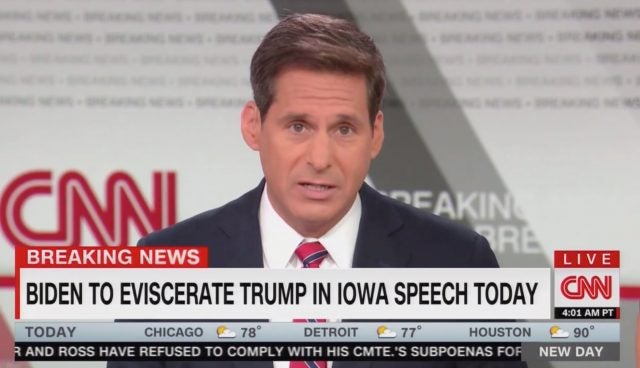 There’s early intel that also says that the Democrats have already strategerized one way they’re gonna go after Trump in 2020, and that’s as a rich guy.

RUSH: We’ve got the sound bites of Trump and the media little gaggle that he had…. Joe Biden is speaking out in Ottumwa, Iowa. He said (summarized), “You know, the hell with making America great again. Let’s make America ‘America’ again!” And he said, “Have you noticed how many thugs around the world are now starting to talk like Trump? This is really bad, folks. This is really bad! The guy talks and he rips into the press. We love the free press here!

“(sputtering) All these thugs around the world are starting to talk to us like Donald Trump,” and he goes on and he lists these horrible things. “But, generally, folks, I must say, I’m optimistic, ’cause the American people always seem to do the right thing.” I guess they didn’t in 2016. Anyway, Plugs is in shirt sleeves. He’s using a hand-held microphone. I don’t think the audience is very big ’cause we’re not getting shots of it, but I’m just guessing. He’s more conversational here than actually making a speech. You’ll have to tell me whether or not that’s playing well or not.

RUSH: I got people in my email inbox who think that the Democrats, the media, they’re just gonna love this Biden speech. They’re gonna swoon like they haven’t swooned because Bite Me is totally conversational, relaxed, open collar, no jacket, hand-held microphone. We have a sound bite or two so you can be the judge. Here he is saying that Trump is an existential threat to America.

BIDEN: The president is literally an existential threat to America for three reasons. One, he is a genuine threat to our core values. If you wondered about that, remember what happened in Charlottesville. I never thought I would see that happen in my lifetime again. You had people climbing out of the fields, and out from under rocks, carrying torches. Contorted faces, chanting the same anti-Semitic bile that was chanted in Europe and Germany in the thirties, same exact language, carrying Nazi flags accompanied by white supremacists, accompanied by the Klu Klux Klan. When he was asked to comment, he said, “There were very fine people in both groups.” No president of the United States, Democrat or Republican, has ever, ever said something like that. Never. 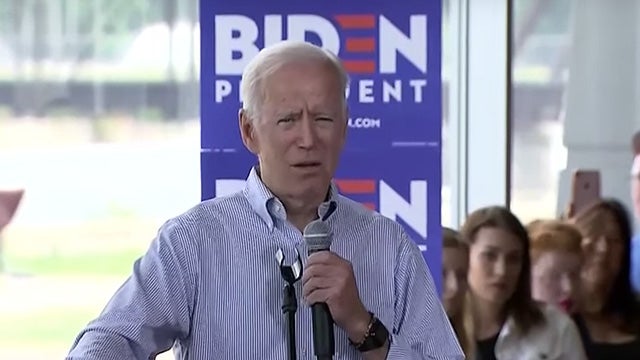 RUSH: And Donald Trump didn’t either. See, a classic, classic example. You can shout that ’til you’re blue in the face but the people who watch the Drive-By Media will never know Donald Trump did not say that. He did not say there were good people in the Nazis, that there were good people in the Klan. He didn’t say that. He wasn’t talking about the protesters at all in Charlottesville.

But this is a Democrat Party greatest hit. They can’t let it go. It’s on par with when Trump cracked the joke about, “Hey, Russia, maybe you can find some of Hillary’s emails,” they think he was really asking the Russians to hack Hillary Clinton’s email server, and they’re gonna go to their graves maintaining that.

So they’ve got so many elements of fake news, fake analysis, just outright lies that they’re telling. You talk about anti-Semitism, if you ask me, anti-Semitism seems to have found its home in the American left and in the worldwide left today. That’s where anti-Semitism is running rampant. It is something far more likely to be found in the Democrat Party than anywhere on the Republican side.

So we have a couple more of these.

RUSH: So we just heard Biden and his existential threat to America. Here is Biden — well, I don’t have to characterize it. It speaks for itself. Bite number two here.

BIDEN: This is a guy who does everything to separate and frighten people. It’s about fear and loathing. It’s about what he calls people the names he calls, no president has done something like that for God’s sake. I mean, it’s bizarre. And it’s damaging. And so I think he’s genuinely a threat to our core values and he’s a threat to our standing in the world. On the D-Day ceremonies, the D-Day ceremonies it was astounding to me that he was tweeting attacks on everybody, from the mayor of London to Bette Midler. He found time to go after Bette Midler, for God’s sake, in the middle of the D-Day ceremonies. For real. Not a joke.

“Well,” Biden would say “that’s because he deserves to be treated that way.” Well, you still don’t call them out. What about America’s values? We have these great allied relationships and all these other little mini-leaders, these shrimp fries are over there taking their potshots at Trump, and that’s perfectly fine with you because that’s what you’re doing.

They had it all figured out. It was just a matter of time. And then it’s all blown up in their faces. And, in the meantime, this guy they think is a big ogre is outsmarting them, is outmaneuvering them, is outlasting them, is outplaying them, and they don’t know how to deal with it. But there’s something about these people that really irritates me, and they do this to everybody, not just Donald Trump.

They can go out there and they can illegalize dodgeball as bullying and exclusionary and then they can go out and produce a TV special with Michelle Obama as a dodgeball captain and then turn around and say that we are violating societal norms. They constantly hold up against us violations of the approved speech code. These people are some of the most profane and most vulgar people in our society. Their pop culture icons are paragons of filth when it comes to content and the language! And they sit there and pass judgment on the way I talk or the way Donald Trump talks or some of the politically incorrect things that might emanate.

It drives me batty that these people, with the things they approve of and the things they sanction sit there in moral judgment of everybody else, mischaracterizing what is said, lying about what is said, and acting like anybody saying or doing anything outside of their accepted norms is some kind of alien, when they themselves are leading the cultural plummet and descent.

It really bugs me. These… “Existential threat to America” or the way he talks, or, “Did you hear what he said about Bette Midler?” They have no problem with what Bette Midler said about him. They have no problem with what anybody’s saying about him. But he turns around and returns fire and outdoes them? All of a sudden, he’s denigrating the office of the presidency! All of a sudden, he is causing the values of the American presidency to evaporate or what have you.

And what it shows is they, in their world, get to say anything they want about us to anybody at any time, and we have to sit there and take it. That’s the rule. If anybody fires back at ’em or — worse, if anybody leads and starts cracking jokes about them, if anybody starts properly characterizing them — then they call the speech police out! “Well, he doesn’t represent our values. We can’t have this man anywhere in public life,” and so forth.

These people the biggest phony baloney, plastic banana, good-time rock ‘n’ rollers that I have seen — who could not accomplish one-tenth of what Donald Trump has accomplished, because their innate policies do not permit it anyway. I gotta take a break. Wait. This next bite’s only 24 seconds. Play the third Biden sound bite. We’ve only got 24 seconds to play with here so we could fit it in.

RUSH: Okay. We’ll see what the Drive-By Media, the other Democrats think of the Bite Me speech. I remember my emails, a couple of them said, “Man, the Democrats are gonna swoon over this. They’re gonna love it. It was conversational, not oratorical.” Well, we’ll see.