Headlines on Homelessness in Los Angeles

RUSH: I mentioned at the beginning of the show that I have a Stack here that actually I could probably fill easily a half hour with on homelessness in Los Angeles. Let me get started with the Stack just to illustrate here. The first story is from the LA Times, and it’s an opinion piece by somebody named Jonathan Katz. He says, let’s be honest. “Call Immigrant Detention Centers What They Really Are: Concentration Camps — If you were paying close attention last week, you might have spotted a pattern in the news.

“Peeking out from behind the breathless coverage of the Trump family’s tuxedoed trip to London was a spate of deaths of immigrants in U.S. custody: Johana Medina Leon, a 25-year-old transgender asylum seeker; an unnamed 33-year-old Salvadoran man; and a 40-year-old woman from Honduras. Photos from a Border Patrol processing center in El Paso showed people herded so tightly into cells that they had to stand on toilets to breathe. Memos surfaced by journalist Ken Klippenstein revealed that Immigration and Customs Enforcement’s failure to provide medical care was responsible for suicides and other deaths of detainees.

“These followed another report that showed that thousands of detainees are being brutally held in isolation cells just for being transgender or mentally ill.” Uh, kind of an oxymoron there, but… “Also last week, the Trump administration cut funding for classes, recreation and legal aid at detention centers holding minors — which were likened to ‘summer camps’ by a senior ICE official last year. And there was the revelation that months after being torn from their parents’ arms, 37 children were locked in vans for up to 39 hours in the parking lot of a detention center outside Port Isabel, Texas.”

This guy goes on to say, these are not “detention centers.” These are “concentration camps.” Well, you know, I see an entirely different picture. If you read the Drudge Report and you check some of the links on the Drudge Report, you’ll find stories that show these people just openly walking across the border. They’re walking through, not being stopped, not being detained, being passed out EBT cards and so forth. In New Mexico, illegals arriving are given EBT cards with a thousand dollars on them. So the idea that we’re running concentration camps?

Anyway, that’s one story: “California Poised to Give Illegal Immigrants Free Health Care — California will soon make history as the state is set to become the first in the nation to give free health care to some illegal immigrants.Gov. Gavin Newsom and Democrats in the state legislature reached an agreement to allow low-income [people] between the ages of 19 and 25 who are in the country illegally to be eligible for Medi-Cal, [California]’s Medicaid program.

“‘While it’s not all we sought, it will provide a real tangible difference for people, especially for those around and below poverty and for middle-income families who don’t get any help under the federal law,’ said Anthony Wright, executive director of advocacy group Health Access…” Ninety thousand people! Bottom line: 90,000 people in California will qualify for free health care. They wanted more. They wanted free health care for people over 65. That was turned down by the state of California. (It’s not worth wasting money on people that are gonna die anyway.)

California’s giving away health care to 90,000 illegals — and that’s just the beginning. From the New York Times: “Migrants in Custody at Hospitals Are Treated Like Felons, Doctors Say.” Another story on how inhumane the Trump administration is. “Homelessness Is a Crisis in California. Why Are 2020 Democrat Candidates Ignoring It?” You know, there was a story last week: 59,000 homeless people in Los Angeles alone live on skid row. The story was that even the Los Angeles city council was stunned and shocked at how many homeless people there are. 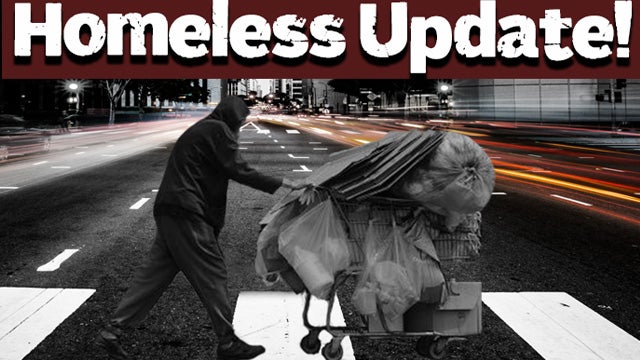 “When new figures released last week showed a jarring rise in homelessness around Los Angeles, the response throughout Southern California was shock and indignation. The reaction from the crowded field of Democratic presidential candidates: silence,” crickets. “While White House hopefuls crisscross the country, making big promises on issues such as college debt relief, climate change and boosting the working and middle classes, they have largely ignored … the soaring number of unsheltered Americans [the homeless] that has reached a crisis point in communities on the West Coast and elsewhere.”

Let me tell you people in California the truth. California is a guaranteed Democrat state no matter what you do. There’s no reason for anybody to care about what’s happening in California politically. The Republicans don’t have a prayer of winning there, and the Democrats know they can’t possibly lose it, so why should they care or pay any attention to it? Especially right now. They’ve gotta do well in New Hampshire. They gotta do well in Iowa. To hell with homelessness in California!

Besides, homelessness? I thought that was solved once we get rid of Reagan! Notice how these left-wing issues just continually recycle themselves, especially when Republicans are in the presidency? But in all truth: For those of you in any official capacity in Los Angeles who want the 2020 Democrats to care about homelessness, you can forget it. They don’t have to lift a finger! In fact, the Democrat candidates for president don’t have to do one thing.

They don’t even have to make a trip to the Los Angeles (except to raise money from Hollywood), because it’s already guaranteed in the Democrat column, in the Electoral College, in the popular vote, take your pick. Democrats do not have to expend one calorie’s worth of effort in California. The way they’re gonna look at it is there’s nothing they can do in California that will help them. The only things they could do in California would be things that might hurt them. So they’re gonna ignore California. Mark my words.