The Proper Analysis of the Jobs Numbers

RUSH: Let me move on to the jobs numbers here. What is it, 75,000 new jobs, said to be “a big miss.” Wage increases kind of “fade” a little bit, it says here, and the Fed says, “Hey, you know what? We might have to cut rates here to spur the economy.” Wall Street loves that. So maybe this ain’t all that bad. But you have to look at this a different way. Folks, for the past three months, we’ve had over a million more job openings than there are job seekers. Isn’t it fascinating how people forget that, if they ever knew it?

That kind of thing is never highlighted in the mainstream media. But we have over a million jobs open, more than a million more than there are people seeking them. I don’t know how you have a better definition of full employment than that. That sounds like full employment to me, when you’ve got a million jobs open and there aren’t people to fill them? Could it be — and, by the way, this is not… I’m not doing political consultant analysis here. I’m just looking at numbers. At some point, does a market get saturated, including a job market?

How can it not be saturated if there are a million more — and it’s been for three months this way: One million more jobs available than there are people to fill them. If we do not have people to fill jobs, well, why? Is it that everybody who wants to work, has a job, and those who don’t want to work don’t have to work in America? Is it that colleges and universities are not training people correctly and the jobs that are open do not have qualified Americans to do them? We don’t know. The unemployment rate didn’t change. It’s 3.6%.

We have been expanding the economy, jobs, all of this. The unemployment rate for African-Americans and Hispanics is at a record, all-time low. (Look, next time Donna Brazile sneaks this there, do not give her a chance to turn on the microphone, okay? Is it too much to ask for some microphone security there? Okay.) So even with this saturated market and unemployment at 3.6% — and an all-time, record low unemployment for African-Americans and Hispanics. We’re still adding jobs, 75,000.

And actually, I think we added 90,000 jobs and lost 15,000 in the government sector. We are smack-dab in the middle of trade negotiations with the ChiComs and Mexico. Businesses may be pausing to see what happens there before making investments in new employees. But things are tending to slow down now, it appears. Which, even though it may make perfect sense, is not good politically for Trump ’cause, you know, the Drive-Bys and the Democrats are waiting for any… They don’t care about the full through it of anything.

All care about is saying, “The economy’s slowing down!” The hell with, why. The hell with, “Maybe there’s no avoiding it.” Nope! “The economy’s slowing down; Trump’s screwing up. Yep! We told you 2-1/2 years ago that Trump’s gonna be a disaster, and here it’s starting to happen.” I can see these messages being prepared even now. By the way, this is why the Democrats are not gonna do anything with Trump legislatively. Not a single thing. There will be no cooperation on an infrastructure plan between now and the election. You know why? 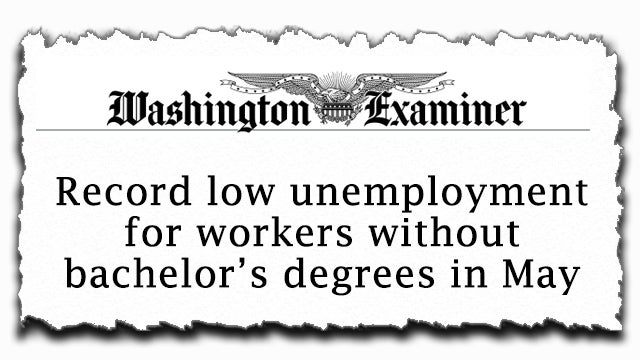 It would stimulate the economy. Talk about job growth? It would stimulate the economy. Democrats want the economy slowing down. They would love it if they could say we’re in a recession starting in 2020. A little bit more detail on this from the Washington Examiner. “Record Low Unemployment for Workers Without Bachelor’s Degrees in May.” I hate this term “worker.” That’s a Soviet term. You heard that term used all over the place in the movie Chernobyl.

RUSH: Anyway: “The extremely low joblessness for less-educated workers…” There it is again, that word. What’s wrong with “people”? We don’t have “workers” in the United States. You remember Elian Gonzalez, that little kid down in the Miami suburbs? His mom died in the Atlantic (well, in the Caribbean) on a raft trying to get here from “Cuber,” and little Elian lived with relatives until Janet Reno stormed their little house with a bunch of agents and took the kid out, sent him back to live with his dad, Juan Gonzalez, down in Cuba? 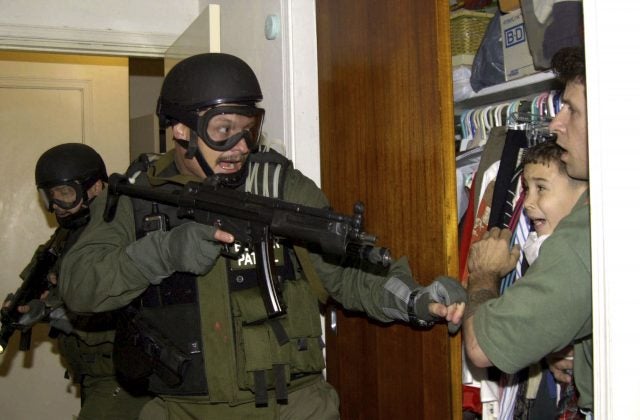 When little kid went back, Cuba had a welcoming ceremony for the kid. He’s eight or 9-year-olds, max. Fidel gets Juan Gonzalez, the father, up there on the stage with him, and what does Fidel say about him? “He’s a good worker! Look at Juan Gonzalez. He’s a good worker.” The Soviets look at people, the communists look at people as “workers.” We have employees. We have associates. We have people, not “workers.” I don’t even think people on our assembly line should be called “workers,” because of the connotation it has with big collective estates and the way they view production.

But, at any rate, this is a story: “The extremely low joblessness for less-educated workers is a sign that the decadelong expansion is benefiting economically vulnerable people and is reaching workers at…” What this is trying to say is that this economy is so strong that they are even jobs for people who haven’t gone to college, as though that is somehow a great marker. That’s what this country used to be known for! You didn’t have to go to college to survive. That myth began shortly after World War II and it’s one of these things that’s grown.

We’ve always had vocational-type people in jobs that this country, society, culture desperately needs. The idea that somehow if you get a job if you didn’t go to college is odd, is weird. Lots of people have good jobs, make great livings that never went to college. Here we’re gonna take note of the fact that it’s so good here, that even people without bachelor’s degrees are doing pretty well. “The unemployment rate for workers…” There it is again. How many times in this story?

“The unemployment rate for workers over the age of 25 without four-year degrees fell to 3.4%,” even better than the overall rate, “the lowest in records extending back to 1992, just barely beating out the marks set in the dot-com boom. … People without advanced degrees suffered the worst of the recession. Workers without high school diplomas, for example, saw unemployment rates of up to 16% in the wake of the financial crisis.”
Now, that may be. There’s nothing odd about that. If you don’t even have a high school diploma, there’s nobody anywhere that’s gonna pay you serious money, on average. There are gonna be exceptions to this. But if you don’t even have a high school diploma, then you really have all kinds of strikes and marks against you.