Two Polls That Are Good News for Trump

RUSH: There’s a new poll out, a CNN poll. They are not happy reporting this poll. The upshot of the CNN poll is more than two-thirds of the American people are happy with the economy. (impression) “That… that… that… that…” They got a problem. They’ve got to do something about that at CNN. They’ve been trying to do something about that and they’re obviously failing. Two-thirds happy with the economy.

RUSH: So, CNN has a poll: Two-thirds of the American people are very happy with the economy. And then here is a story from the Millennial website called Axios, and this headline is a big win for Trump. It’s a poll from the Pew Research Center. “Americans View Fake News as a Bigger Problem Than Terrorism.” Holy smokes! Fake News, according to the Pew…” I love the way Axios writes. Axios does this new Millennial kind of journalism. They’ll give you a paragraph of so-called information, then the next paragraph is called, “Why it matters,” then the next paragraph is “What it means.”

And then the next paragraph: “Why you should care,” then the next paragraph: “What you should do.” So the first paragraph: “Americans view made-up news and information as a bigger problem than other critical issues, including terrorism, immigration, climate change…” Oh-ho-ho-ho! It’s even bigger! Fake news is an even “bigger problem … than climate change.” Do you realize the Drive-Bys are gonna see this, and what they see is utter failure of their agenda to persuade a majority of the Americans?

And they are the purveyors of fake news. 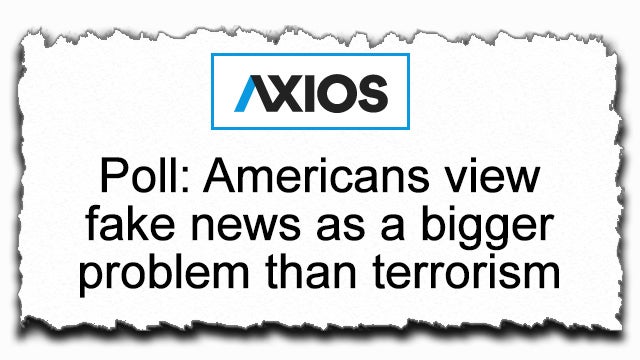 They were not to take her literally. She was joking. We were confusing her with Drive-By, late-night comedians (ahem) which don’t do comedy anymore, they do hate. Do you realize that? Do you realize late-night comedy shows are now late-night hate shows and they are designed to get the biggest applause for the most hate? It’s amazing. It’s something I have been noting here for years. Ever since Colbert was hired by CBS, the die was cast. Hate for Trump. Hate for conservatives. That’s what late nice day comedy has become.

Anyway, now, the next paragraph from Axios, “Why it matters…” I can just see these little Millennials out there reading this stuff. “Why it matters” is their favorite paragraph of the story. “The survey finds that Americans feel more worried today about fake news because it’s undermining their trust in key institutions, like government and the media.” (chuckles) That’s “Why this matters… The only issues that rank higher than made-up news and information as ‘very big problems in the country today’ are drug addiction, the affordability of health care, the U.S. political system, and the income gap.”

But nowhere in there is terrorism, climate change, racism, transgenderism, use-the-bathroom-you-wantism. Not there. Next paragraph: “By the numbers: An overwhelming majority of Americans (68%) believe made-up news and information has a big impact on their trust in government…” Next paragraph: “Between the lines…” Now, the “Between the lines” paragraph is what it really means!(impression) What only we at Axios know in this — and if we didn’t put this paragraph here, you readers are too stupid to ever figure it out.

(laughing) No, they don’t! (laughing) And then this thing goes on to say they’re looking to journalists to fix it. That is the last thing that’s happening. Anyway, it’s a great… It’s another winner headline for Trump. I don’t mean that it’s gonna get votes. It’s just that Trump is the one that’s criticizing news as fake news. He’s made it a thing! Trump has made fake news a thing, and now Americans view it as a bigger problem than terrorism.