RUSH: So 64% of the American people know or think the FBI knew the dossier was a bunch of crap when they applied for a search warrant against the Trump campaign. Only 34% of those people know that Hillary Clinton paid for it. Now, here’s the next little bit of news that we have learned. It is from the Washington Times.

Special counsel Robert… And, by the way, for those of you… And I’m using my empathy here… I know some of you are probably thinking, “Rush, could you get off of this? It’s over with. It’s done with.” No, it’s not! That’s the point, folks. This is what’s driving everything. The Mueller report and nothing in it. Two and a half years of getting Trump and a failure. This is what is driving everything. I would love to be able to move on from this stuff, but they won’t!

And until they do, I’m not gonna stop talking about it. These people are not gonna get away with mischaracterizing this over and over again. “Special Counsel Robert Mueller relied on the media to feed his Russian election interference report, citing scores of stories in the media that promoted the Trump-Russia collusion conspiracy.” In other words, the FBI did this too.

Let me walk you through this again, because this still remains as outrageous as it ever was. The first day I learned about this, I still am hell-bent that somebody or a bunch of people be held accountable and pay the price for this, because this is as un-American and unconstitutional as it gets. Okay. So you have the FBI, Struck Strzok Smirk and Lisa Page. You’ve got McCabe. You’ve got Comey. You got this whole cabal. They hate Trump. They love Hillary. They want Trump gone. Trump wins the election; they’re beside themselves. They can’t stand it. 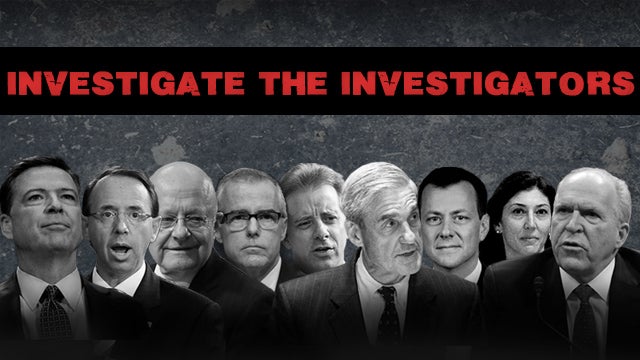 So they begin the effort here to largely drive down his public approval numbers, which is the key to being able to impeach him. So the FBI calls… Let’s go back to the campaign. They want to spy on the Trump campaign, not because there’s Russians involved, but because they want to try to create collusion with Russia. Do not mistake me. The FBI, these people in it, wanted to create the collusion. They tried to get a couple of informants hired. They didn’t succeed in doing that; so they want to spy on the Trump campaign, to use Carter Page.

Well, what they didn’t tell the FISA judge is that the only reason the New York Time and the Washington Post had it is because the FBI told them. The FBI told the New York Times and the Washington Post about these supposed links of collusion. They publish the story. The FBI then takes those, adds them to their list of evidence to get a warrant. That’s what Mueller did. Mueller, in this report of his, cites hundreds of newspaper stories as evidence, or as things that he followed up. Well, these newspaper stories would not have been published had Mueller associates in the FBI, Donald Trump, leaked the information to them.

Special Counsel Robert Mueller relied on the media to feed his Russian election interference report. In other words, Mueller’s staff of Democrat aligned prosecutors favored the New York Times over other publications. The Mueller report cites more than 60 New York Times stories as evidence of Trump-Russia collusion! Well, not as evidence because there wasn’t any, but as a reason they were following it up.

In other words, Mueller’s report tries to say that the investigation was legitimate because it also showed up in the media, in addition to what we in our own team were doing, look what the New York Times and Washington Post found out. Well, they didn’t know anything until the FBI leaked it to them. The report refers to the Washington Post 40 times. CNN has about a dozen citations. NBC News gets mentioned 10 times. And its anchor, Lester Holt, is the lone journalist to appear in the report’s personalities glossary, and that’s from his May 2017 interview with Trump. This is just further ammo, information…They didn’t have anything.

The media had nothing without the leaks from investigators. Those leaks get published. The investigators turn around and use those published stories as backup for their own efforts. The same thing they did to try to get a FISA… Folks, this is a bigger scam than anybody has yet been able to get their arms around.

Trey Gowdy… Grab audio sound bites 19 and 20. Trey Gowdy was on Sunday Morning Futures with Maria Bartiromo on Fox. She said, “Talk about the FBI’s conversations with George Papadopoulos. Because when the FBI agent sends in informants to someone they’re looking at, typically those conversations are recorded, right? These people, they’re wired up.” He’s talking about… Or she’s asking about Stefan Halper and Joseph Mifsud are the two people, the informants that fed Papadopoulos the story that the Russians had dirt on Hillary Clinton. Here is what Trey Gowdy’s answer is.

GOWDY: If the bureau’s gonna send an informant, the informant’s gonna be wired and, if the bureau’s monitoring telephone calls, there’s gonna be a transcript of that. Some of us have been fortunate enough to know whether or not those transcripts exist. But they haven’t been made public. There is some information in these transcripts that I think has the potential to be a game-changer if it’s ever made public. If you have exculpatory information and you don’t share it with the court, that ain’t good. I’ve seen it. Johnny’s seen it, I’d love for your viewers to see it.

RUSH: They’re talking about John Ratcliffe there. By the way, this exculpatory information, that’s called Brady material. It’s named after legislation, somebody named Brady, and it was designed to ensure that prosecutors turn over exculpatory evidence, somebody they’re looking at, somebody they’re prosecuting, somebody they’re trying to convict, if they come across evidence that indicates the perp didn’t do it, Brady requires they share that with the defense lawyers and the court! Guess what? These people on Mueller’s team were cited for not doing that in the Enron Task Force trial and the Ted Stevens case. They held onto Brady material. They did not release it. They kept evidence the perps did not do it from the court. And that’s exactly what Gowdy is alluding to having happened here.

In other words, all these conversations with Papadopoulos were taped. They were wired. And the conversations reveal what happened, and they have not been released, the transcripts. He’s saying he’s seen them. And they are game changing. Gowdy wasn’t finished. This is the rest of his comment.

GOWDY: We can call it a dossier. It sounds official. It’s really something the National Enquirer would blush if they print it. So we know that it was used four times by the United States government. What we’re trying to figure out is whether or not it was used a fifth time in the intelligence assessment. And you got Brennan, Clapper, and Comey, all three who know full well whether or not it was used in the intelligence assessment, but they’re giving you different versions. It’s pretty bad if it was just four times. It’s really bad if it was five.

RUSH: Okay, now, what is this fifth time, this intelligence assessment? Well, I think that’s when Comey goes to Trump Tower and tells Trump about the golden showers story. Trump supposedly hired prostitutes to urinate on a bed in Moscow because Obama had slept on it. Five times, minimum four times.

But the really fascinating thing about this to me is that Gowdy is alluding to transcripts of phone calls that he’s seen between these informants and Papadopoulos and that they are exculpatory, exculpatory of Papadopoulos, exculpatory of the Trump campaign, and they have not been released. They have been withheld. Now, since this wasn’t a criminal investigation and there wasn’t a perp designated, it was counterintel, which does not seek evidence of crimes, it’s seeking intelligence that then gets analyzed by intelligence analysts and experts. Two vastly different things.

And so the Brady Rule may technically not really apply here, but it still does in terms of decency, law and order, and the Constitution. If you had a bunch of people who knew, in the course of this investigation that say Papadopoulos or somebody else did not do it and they still haven’t released that, it still hasn’t been made public, that’s a huge problem, and it’s game changing. And Gowdy means that when the public finds out about it… And this is all part of this trove-of-documents that Trump has not yet declassified, that we continue to be told he’s going to declassify. We’ve been told this for two years and it hasn’t happened. We continue to wait with bated breath.

RUSH: By the way, the intelligence assessment that Gowdy was referring to, the potential fifth time, that’s the piece of garbage that Clapper wrote and had a handful of his stooges from the FBI and CIA swear was accurate. This is the assessment that the Democrats and the news media claim showed that 17 intelligence agencies agreed that the Russians colluded with Trump and meddled in the election. This was something that happened, I think, in late 2016.

It was after the election, I’m pretty sure, and it was part of the onslaught of leaks that were appearing daily in the New York Times and Washington Post, and it was an Obama administration effort. I know Obama was still in office when this happened. Remember this? It’s kind of like there’s this letter out there now with something like 800 former federal prosecutors (some of them probably from the grave) agreeing that President Donald Trump has obstructed justice and da-da-da-da-da-da-da.

It was 800 former federal Democrats — uh, prosecutors. Well, Clapper got 17 intelligence agency people to sign some document that they agreed that the Russians and Trump had colluded. That’s the fifth use. That used the dossier. Clapper used the dossier, showing it around. I remember when that happened. There was a significant degree of anger that the American intelligence community would share intel with other nations, intel that they had not gathered. (paraphrased) “We are sharing this in order to ask them to participate in analysis and asking their conclusion.”

It was a phony political effort to try to persuade public opinion again. (impression) “Well, 17 independent intelligence agencies from around the world have now seen the dossier and agree that the Trump administration and the Trump campaign colluded with Russia,” blah, blah, blah, blah. That would be the fifth usage of the dossier. The other four usages of the dossier were for the FISA warrant application and its three renewals.