RUSH: Todd in Charlotte, North Carolina. Great to have you, sir. Hi.

RUSH: It’s great to hear from people in the 9th District. I’m not crazy about the 10th, but the 9th is okay. It’s great to have you with us. How you doing?

RUSH: I can imagine.

CALLER: (chuckles) So I gotta tell you, back in the nineties I was an engineer at Motorola, in the cellular phone area, and then they had an epiphany with Bill Clinton’s stuff where we sent all of our factory… Were sent five lines from one cellular factory to China. We sent them all the blueprints, we sent them the engineering, because that’s what was required. In addition, Nokia and Ericsson, our competitors, were doing this, and Motorola kept doing this.

Eight years later, wouldn’t you know it? China said, “No, no, no. We’re not gonna share that with you,” and they started other cellular companies like HTC or whatever they use. Now Motorola is bankrupt, Ericsson is bankrupt, and Nokia is barely hanging on in the cell phone industry. Likewise, when I worked at Hoover, they did the same thing. All the stuff goes over to China. Everybody in Cleveland was let go. They lost their jobs. They lost a lot of money. They lost their homes. It was devastating for us.

RUSH: Wait a minute. You went from the cell phone business to the vacuum-cleaner business?

CALLER: I did. So it sucked.

CALLER: (laughing) Yes. But I have to say, five years ago, when Hoover moved from Cleveland down to Charlotte, there were a lot of people who lost their jobs, and the economy was just dismal. China was winning, and we were losing. We were paying for it. We were heartbroken, and we’re losing everything. Now this president is standing up, and he’s kicking China where they should get kicked and we’re getting even. We’re getting back up to where we should be. So it’s not a vindictive thing of getting even. It’s just the right thing. He’s so strong and so good in what he’s doing with his negotiations. I am originally from the farmer country up in northeast Wisconsin and dairy farms, and we understand what he’s doing.

CALLER: And we trust him (unintelligible). 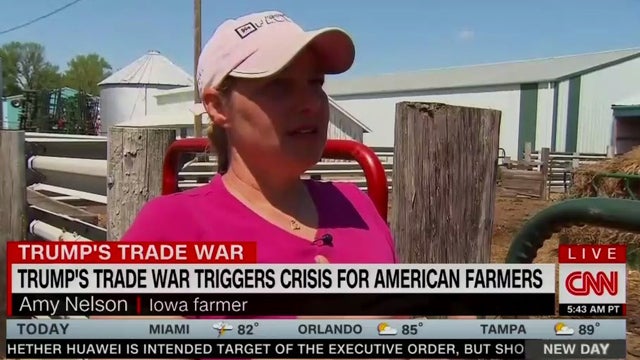 RUSH: Now, wait a minute. Wait just a minute, because I think it was… I don’t know. It might have been Fox that I saw this morning. It could have been CNN. I’m not sure. But they had a farmer on, and the farmer was crying. It was a woman, and the farmer was in tears because Trump was destroying them with this trade war with the ChiComs. They had voted for Trump. (This had to be CNN.) They had voted for Trump, but they’re just so let down, that Trump’s vendetta with the Chinese is hurting farmers.

Whoever was talking to the farmer said, “Well, look, you can sell soybeans to anybody. You don’t just have to sell them to China,” and the farmer said, “Yeah, but they buy our soybeans to make food to feed their animals, and they’ve got a lot of them in China.” By the way, that is one of the reasons for soybean exports is that they are integral in the manufacturing of animal food, livestock and this kind of thing.

But it was clear that this was a media attempt to put pressure on Trump that his supporters — the farmers and the agriculture community — are at their wits’ end. They’re in dire straits, because Trump finally has showed he doesn’t really care. And it was non-persuasive to me. It seemed like it was a bit contrived, whereas you sound legit. You sound legitimately optimistic about this. It has to happen. This 30-year arrangement that we have had, this purposeful imbalance of trade with China, has to change because of the evolutionary growth of the Chinese. They’re not making little trinkets and toys that they export to us anymore. 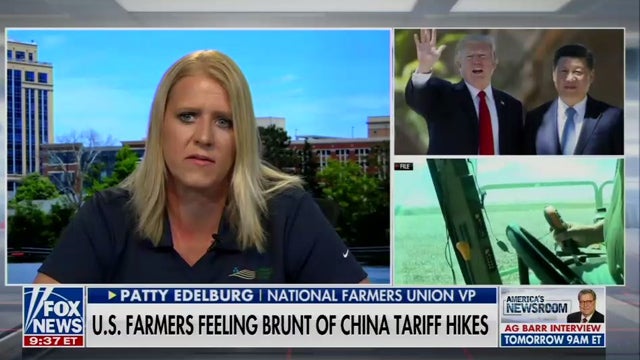 There’s simply no reason for this. There’s no reason for this imbalance. There’s no reason why they should be able to essentially steal $500 billion a year from us with a trade imbalance, and it will send a signal to other nations that we trade with. It’s simply about one thing. It’s about reasserting the primacy of the United States as the world’s lone superpower, and that we’re no longer going to take this attitude that you can trample on us a little.

And we’ll take it because we realize we’re bigger than you and that may not be fair. That stuff’s all out the window now. Trump doesn’t believe in us ending up in second place just to be nice about things. He doesn’t want us to end up in first place so that other people are in last place. He wants everybody to do well. He wants every nation and everybody living in every nation to do well. This is not about hurting anybody.