RUSH: Now, ladies and gentlemen, all of us here at the EIB Network, as you know, are huge supporters of the United States military, as are you. As I said yesterday: As I grow older, I am in greater and greater awe of the sacrifices made every day by these men and women.” When I was 19, 20, like they are… They volunteer. They do something that 97/98% of the population wouldn’t do. They volunteer to make the ultimate sacrifice for their country. We here at the EIB Network try to honor them as often as we can.

We try to do anything we can to support our troops and to show our appreciation. 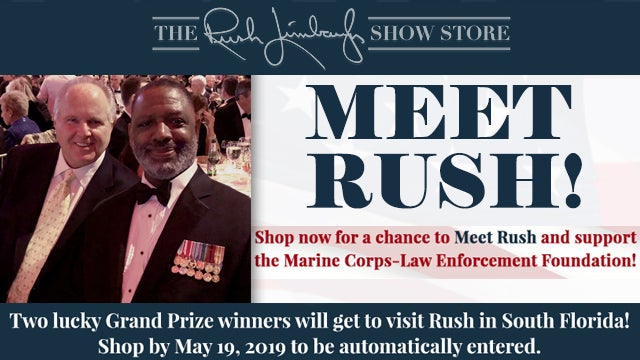 So today, in honor of United States military, we’re hosting a special fundraising promotion at the new Rush Limbaugh Show Store online at RushLimbaugh.com. Starting right now through Sunday at 11:59 p.m. Pacific Time, you can shop at the online store and automatically be entered to win a grand prize: A four-day, three-night trip to right here, Palm Beach, Florida, to meet me and some other exciting things. Proceeds from the promotion go to the Marine Corps-Law Enforcement Foundation, which is a great organization that is dedicated to helping the families of men and women killed in action with college scholarships and other assistance.

First responders in mass disasters. The Marine Corps-Law Enforcement Foundation does the Lord’s work, and they are one of our favorite military-support agencies out there. They have minimal administrative overhead. Practically every dollar donated gets delivered to recipients. We’re gonna be awarding two grand prizes including round trip travel for two, luxury accommodations, great meals — and, of course, meeting me. We don’t skimp on anything. You get to choose when you have time to come. You get to choose the time of year.

We don’t pick the busiest time of year or the slowest time of year. We don’t put you up in fleabag hotels. We don’t make you fly airlines you never heard of. It’s all top line, top to bottom, four days and three nights — and, even if you’re one of the winners and if you can’t travel but you still want to be part of it, you can transfer your gift of a grand prize winner to anybody that you want. Provided they pass our security background check. Not really. (chuckling) Just kidding. It’s transferable, is the point — and, folks, I talked about this yesterday. 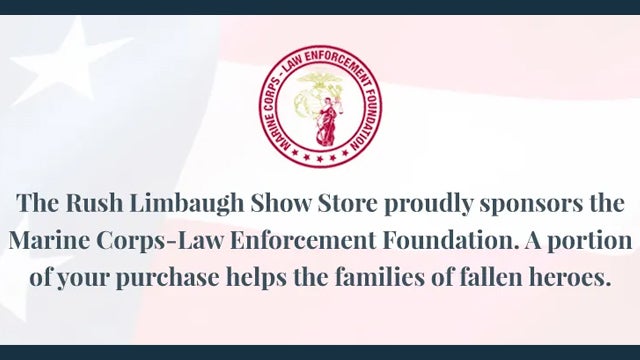 I truly love everything that’s in the new online store. I wear many of the items. In fact, I’ve been wearing some of the new polos and people have been reacting, saying, “Where can I get these?” Go to RushLimbaugh.com and click on the store tab and take a look at all of the brand-new apparel. New designs. We’ve got some of the hottest T-shirts going. The material is not like any T-shirt you’ve ever had. People talk about this. We’ve got a brand-new, red-and-white EIB polo.

We searched high and low for top-notch, high-quality gear that fits well, looks sharp. The caps come from New Era, our favorite high-quality hat featuring the embroidered Rush Limbaugh Show logo. Look, Memorial Day is coming up and Father’s Day is coming up. It’s a great opportunity here to help us help the Marine Corps-Law Enforcement Foundation. RushLimbaugh.com. Click on the store tab. Get going!

RUSH: Now, folks, a reminder. The EIB Store, the RushLimbaugh.com store at RushLimbaugh.com is there by public demand. The store languished for years. We didn’t really update the gear. We didn’t spend a whole lot of time on it. I’ve told you the reasons why. I’m not into pushing myself on people, but the public demand for restocking and having new merchandise became overwhelming, and so we redesigned the store. 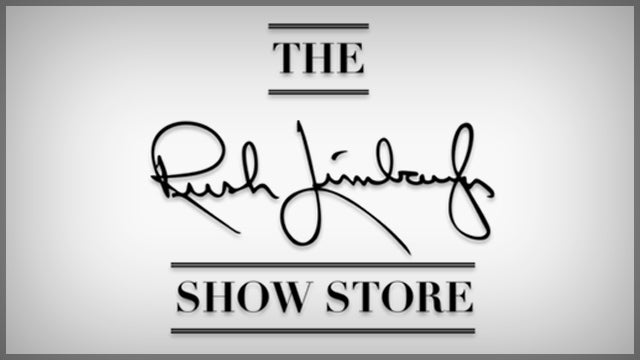 We’ve restocked it with brand-new designs, top-quality apparel and clothing. Whatever is there is top quality, based on the price points that we wanted to reach. In addition to that, I just want to remind you that proceeds, some of them, go to the Marine Corps-Law Enforcement Foundation to help the kids of Marines killed in action get college scholarships and so forth. And there’s some limited quantities. We’re not limitless on everything, so be aware.

RUSH: What I was trying to say there in a very few precious seconds in the remaining segment, previous segment, is there are limited quantities of every item; so be sure and hit the store as soon as you can. I don’t want people getting mad at me if things run out. You know, this is always the case. We’ve stocked extensively on what we think are going to be the items that you like most, but there are always surprises on that. Folks, you’re gonna love the presentation when your purchases arrive.

They’re absolutely gift worthy. We have taken this to the Nth degree because we have so much appreciation for you — and, again, this store actually exists in its current form because of popular demand. So, it’s there and a couple of grand-prize winners could end up winning a trip here to the EIB Southern Command. It’s four days, three nights in south Florida. Whatever you want, we’ll make it work — and it’s up to you if you want to play. RushLimbaugh.com and the store.