The Coup Conspirators Must Be Held Accountable

RUSH: This is Maureen in Boston, and it’s great to have you on the EIB Network. Hello.

CALLER: Hello. I am so excited to speak to you. I’m very nervous. I’ve been following politics more intensely, obviously, since Trump joined. I started in 2015. And I follow very carefully a lot of like the Sara Carter and the John Solomon, and of course you every day I listen to, I feel like I’m really up to speed. And I pray these people get held accountable, like Comey, Clapper, and Brennan.

But my real question is, even if we get that done and we get them, whether it’s jail time or just the public to really understand what happened, will it restore Trump’s name in the voters who support him? Because I’ve been true to him, and I’m tired of being beaten up, and I’m sick of these liberals, too, but —

RUSH: Well, you know, Maureen, for somebody who claims to be a political novice, you’ve actually asked a very insightful and very perceptive question. And I’m glad that you got through to ask me that. ‘Cause you’re asking, okay, if what we think should happen, if all of these conspirators who ran this coup, if they are indicted, and if they are tried, and if they are convicted or if they plea, if they end up getting some kind of punishment, you want to know, will it stop the hating on Donald Trump? Will it open people’s eyes to what happened? Right?

RUSH: I don’t think that’s the question. See, I think if that happened, that would be icing on the cake. The real focus here has to be holding these people accountable. Not whether or not the American people stop hating Trump. I think the media has dredged up so much Trump hatred, so much irrational hatred for things and for him that they may be too far gone. 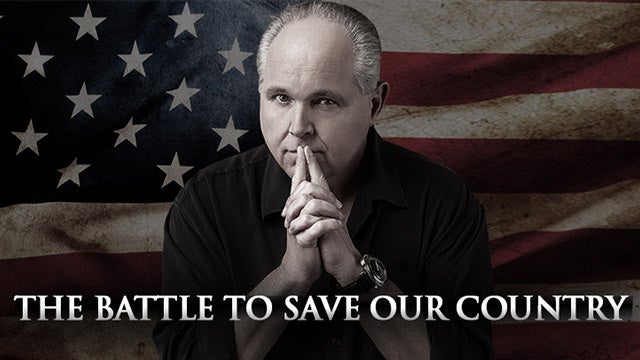 They did the same thing with George W. Bush. George W. Bush was ravaged and hated for being stupid and talking like a cowboy, and there was no way that George Bush was ever gonna be rehabilitatable in the eyes of public opinion. It’s what the left does. Their media literally poisons people. But that shouldn’t be a factor in whether or not there is accountability here.

You know, I don’t know how far this is gonna go. You mentioned Sara Carter and John Solomon. And for two years, I mean, you probably have been hearing that these people are gonna be held accountable, breaking news, these people are going to jail, it’s gonna happen soon, and it never happens so you’re getting frustrated, and you’re wondering what the hell. And as you hear about all of the crimes they’ve committed and how everybody’s closing in on ’em, it doesn’t seem like anybody’s closing in on ’em, it doesn’t seem like anything is gonna happen to ’em. You want something to happen to ’em. And I do too.

I want there to be a real price paid for this. We’re working on the cover for the next issue of The Limbaugh Letter and they gave me two different covers to choose from to try to graphically illustrate how close we came to — do you realize, folks, if these people — and let’s name them, eight to 12 people, and there’s more, but, I mean, you’ve got Obama, then you’ve got Brennan and Clapper, you’ve got the FBI people, Comey. Comey and Brennan are the two guys here, along with obviously the support and the permission of Obama.

I don’t think Obama’s ever gonna be held accountable, by the way. He’ll be protected no matter what, former president. But the other guys, maybe. But these unelected people came so — and they’re not through trying — they came so close to being able to cancel a presidential election because they simply didn’t like the outcome. They concocted a gigantic lie, a series of lies and a gigantic conspiracy to prove a bunch of lies.

They convinced a majority of the American people that the Russians tampered with voting machines. They came so close to destroying the sanctity of American elections, and they’ve done great damage to the idea that elections are fair going forward for I don’t know how long now. But if they had gotten away with this, then the deep state, the administrative state would be convinced that they could overturn any election they wanted in the future.

And the minute you take “we, the people” out of the construction of the American political system, then we cease to be America as founded. And there has to be a price paid for the people who were attempting to do this. And if they are convicted and if it’s told factually for all of America to know what they did, will that change people’s opinion of Donald Trump? I doubt it. But it doesn’t matter to me whether that happens or not.

RUSH: I think people’s minds could be opened to what the conspirators did. Don’t misunderstand. I think there could be genuine outrage at the Comeys and the Clappers. I don’t think there’s any doubt about that. Whether that would then translate to, “Oh, we were wrong about Trump.” I don’t know. We’re talking about leftists, after all.

Grab sound bite number eight. This is The Turtle, Mitch McConnell — the Senate majority leader — this morning on the Senate floor…

MCCONNELL: What we’ve seen is a meltdown, an absolute meltdown, an inability to accept the bottom line conclusion on Russian interference from the special counsel’s report, which said, “The investigation did not establish that members of the Trump campaign conspired or coordinated with the Russian government in its election interference activities.”

MCCONNELL: Two years of exhaustive investigation and nothing to establish a fanciful conspiracy theory that Democratic politicians and TV talking heads have treated like a foregone conclusion.

MCCONNELL: They’ve told everyone there’s been a conspiracy between Russia and the Trump campaign. Yet on this central question, the special counsel’s finding is clear. Case. Closed.

RUSH: “Case. Closed.” You know, there’s a message there to Speaker Pelosi: Don’t bring your impeachment trial over here ’cause it ain’t gonna happen. But remember… (laughing) This is so great. Pelosi… If you missed the first hour, Pelosi is out there saying… She’s warning her Democrats not to fall for this “trick” that Trump is playing on them. Trump is goading them into trying to impeach him, because he needs to “solidify his base.” So she’s warning her peeps, “Do not fall for this.”

Madam Speaker, Trump’s base is already solidified, more solidified than any base you’ve ever seen or had, and it doesn’t need to be solidified further. I mean, this… (laughing) “Don’t let Trump get away with this! He’s goading us! He’s goading us into impeaching him,” as though they’re powerless to resist. I want to air a couple sound bites here from Devin Nunes. We owe… Devin Nunes is a member of Congress from California. He ran the House… Let’s see. I get these committees confused.

It’s the committee that Pencil Head is now the chairman of. He ran it when the Republicans had the majority, and Devin Nunes single-handedly is the person who exposed for once and all that the dossier is all they ever had on Donald Trump. It’s the only thing they used at the FISA court to get their warrants. It’s all they ever had. It was Devin Nunes who enabled all the rest of us to say with great confidence that when Mueller was appointed and shows up at his office and asks Comey for the investigative file and opens it, there was nothing in it.

They never had a shred of evidence on any of this, and it’s Devin Nunes and his dogged pursuit which has revealed this. He has been desperately trying to get Rosenstein and Trump to declassify all documents that would finally spell out how all of this began. He was on Fox Sunday Morning Futures with Maria Bartiromo, and I’ve got a couple of sound bites I want you to hear. She said, “You sent a letter late Friday to the heads of the FBI, the DOJ, NSA, CIA. Tell us about this letter that you sent.”

NUNES: We spent 30-plus-million dollars on this as taxpayers, and they can’t even tell us who Joseph Mifsud is? So if we’re getting to the bottom of this, we believe he has ties to the State Department. Actually, our State Department had him in the United States Capitol in 2017, and remember why Mifsud’s so important is because Mueller — the Mueller dossier team — they essentially make this guy out to be a Russian asset under the control of Putin, and said that he has ties to these Russians. Sound familiar? So this is the origination of this investigation, and it seems like Mifsud has an awful lot of ties to U.S., British, and Italian intelligence services.

RUSH: Let me translate. Mifsud is the professor from Malta who was an asset utilized by the FBI and Stefan Halper in the George Papadopoulos episode. It was Mifsud who supposedly first told Papadopoulos that the Russians had some dirt on Hillary Clinton. Not emails! Had some dirt on Hillary Clinton. Now, the FBI and the Mueller team have labored very hard to try to imply — because they can’t say with certainty — that Mifsud is a Russian agent.

They want Mifsud to be a Russian agent because that would then prove collusion. “Mifsud: Talking to Papadopoulos. Mifsud: Russian agent!” But he’s not. They can’t prove it! Mifsud was interviewed by the special counsel, and it’s more than likely he was a U.K. or FBI asset that wasn’t Russian. That’s the importance of his name. Bartiromo then said, “Well, look, they put all of these sources all across the world to get to members of the Trump campaign, like they reached out to George Papadopoulos.”

NUNES: There’s a lot of talk about how Papadopoulos… He caused the FBI and the Mueller team problems, because he didn’t tell them about the relationship with Mifsud and how Mifsud had offered emails. Now, this is in 2017, okay? This is in the Mueller dossier. So this is all about in 2017 how Papadopoulos harms their investigation. Right?

NUNES: Well, how is it, then, that the FBI — or supposedly the FBI or other assets — know to continually ask Papadopoulos about emails (chuckles), about Clinton emails in 2016?

RUSH: This remains a fundamental point, and I know you’re probably saying, “Oh, no, Rush, not again.” But, yeah, because they labored hard. The FBI, the DOJ, Comey and his crowd labored hard to try to convince people that the investigation into Trump and Russia only began at the end of July 2016 when George Papadopoulos was running around telling people that he knew that Russians had dirt on Hillary Clinton. But again, Papadopoulos only knew this because friends of the FBI — including Mifsud and Stefan Halper — had told him. And then he had the fateful evening in the bar with the Australian ambassador and told him (not about emails) that the Russians had dirt on Hillary Clinton.

Downer goes and tells the FBI.