RUSH: Well, Victor Davis Hanson has a piece today called, “The Fright of James Comey.” It appears at AmericanGreatness.com. It’s a long piece. I could not hope to read the entire thing to you. But I did pull a paragraph from it. Actually, two paragraphs. “Comey…” He really focuses on James Comey here as one of the lead culprits. “Comey…” In my mind, I put John Brennan at the top of this list, the CIA director for Obama. But here’s the pull quote, the money paragraph:

“Comey seems to have become utterly unhinged by Donald Trump, especially when the president, in his thick Queens accent, scoffs in the vernacular — quite accurately, given the transgressions of the FBI hierarchy — about ‘crooked cops.’ What an affront to Comey’s complexity, his subtlety, his sophistication, his feigned Hamlet-like self-doubt — at least as now expressed in his latest incarnation as Twitter’s Kahlil Gibran. …

“Remember, James Comey assured the nation that the Steele dossier, contra the testimony of his subordinate Andrew McCabe … was not the chief evidence presented to a FISA court. That is likely untrue. And if it is not, Comey’s other evidence he presented is likely to be just as compromised. Comey also misled a FISA judge by not admitting 1) that his submitted dossier evidence was compiled by a contractor paid by Hillary Clinton; 2) that ex-British spy Christopher Steele’s work was unverified; 3) [he didn’t tell the FISA court] that Steele’s relationship with Comey’s FBI has already been severed due to Steele’s unprofessional behavior; and 4) that submitted news accounts of ‘collusion’ were in circular fashion based on the dossier itself.”

What that refers to is this. The FBI leaked a bunch of stuff in the dossier to the media. The media then reported it. Comey got those media reports and presented it in the list of evidence that he presented to the FISA judge. “See, Judge, even the media has gotten hold of this.” That’s what Mr. Hanson means by the circular fashion.

In other words, they plant, they leak news to the media; the media reports and publishes the news; then Comey goes, gets that news and takes it to the judge at the FISA court, “Look, Judge. Even the media is reporting what we have found out.” He doesn’t tell the judge that they leaked it to the media!

Had Comey’s behavior ever become standard procedure in FISA applications, there could be no longer a FISA court. Comey also misled about his meetings with President Trump, as memorialized in his now infamous memos. He briefed the president on the Steele dossier — without telling Trump that it had been paid for by Hillary Clinton. Comey likely also lied in telling Trump he wanted to brief him on the dossier in worries that the press might otherwise report on it first. In fact, his meeting with Trump by design was the necessary imprimatur the press had been waiting for to leak information from the dossier, which shortly followed.

This is a reference — and this all happened — meeting in the Oval Office, Obama, Clapper, Brennan, Comey. They decide to present the golden showers version of the story in the dossier to Trump the next day at Trump Tower. He’s not president yet, not inaugurated. Comey and those other guys go have the meeting, Comey ushers the others out of the room. It’s just he and Trump in Trump’s office at Trump Tower. And Comey tells Trump about the golden showers story in the dossier and says, “You need to have an intel brief every day. This is the kind of stuff that’s out there. You need to know about this.”

Well, presenting it to Trump closed a loop making it news. Comey leaves the meeting with Trump and calls Clapper and says quite literally, “Mission accomplished.” Clapper then calls CNN, who shortly hired him thereafter, and says the president was just told about golden showers. Bingo. That makes it news. That means CNN was able to report it. Comey did not tell the FISA judge that that’s how any of this happened.

He also probably lied to everybody else in wanting to brief Trump on the dossier in worries the press might otherwise report on it when in fact this was a stratagem to get dossier in the media.

“Comey likely misled the president into thinking both that he was not under investigation by the FBI and that the FBI hierarchy did not leak confidential information to the press. In fact, neither assertion was true; both his deputy Andrew McCabe and Comey himself were chronic leakers. Comey swore under oath that he had never authorized anyone in the FBI to leak to the press, while his deputy McCabe swore in contrast that Comey was well aware that his subordinates were talking freely with the press in order to leak information selectively.

“The only remaining mystery of this entire sordid mess is how the rotten onion will be peeled away. When indictments come down, will the likes of Fusion GPS co-founder Glenn Simpson or James Baker or Bruce and Nellie Ohr be leveraged to inform on the likes of the Brennan, Clapper, Comey, and McCabe high stratum — that in turn will provide clarity about still higher officials to learn what Barack Obama, Joe Biden, Loretta Lynch, Susan Rice, Samantha Power, and Sally Yates knew and when they knew it? In the meantime, expect James Comey to continue his frenetic pace on TV, radio, and in op-eds attacking William Barr and Donald Trump in deathly fear that his illegal behavior may finally have a legal accounting.” 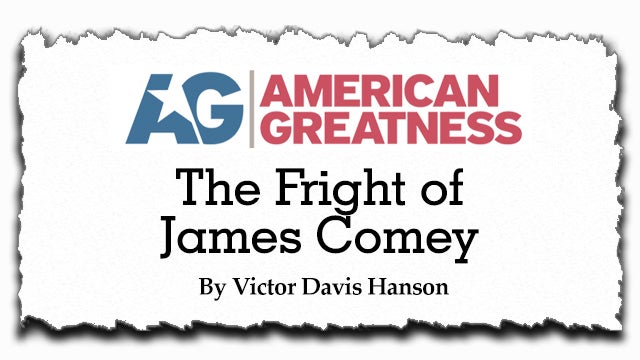 The title of this piece: “The Fright of James Comey.” It’s by Victor Davis Hanson at American Greatness. You should read the whole thing.