RUSH: The thing off the top to me today is Pelosi. I find this as rich as it can be. Pelosi as gathered her Democrats together to tell ’em a couple things. A, do not go down this path of impeachment, do not do it, and do not respond to exuberances in our party, and by that she means the Millennial socialists like AOC and some of the others.

She says (paraphrasing), “We won the 2018 midterms by talking about mainstream media things like jobs and health care and tax cuts and all of this kind of stuff.” Of course, they said the wrong things about all those, but that’s what she thinks was the reason they won the House in 2018. 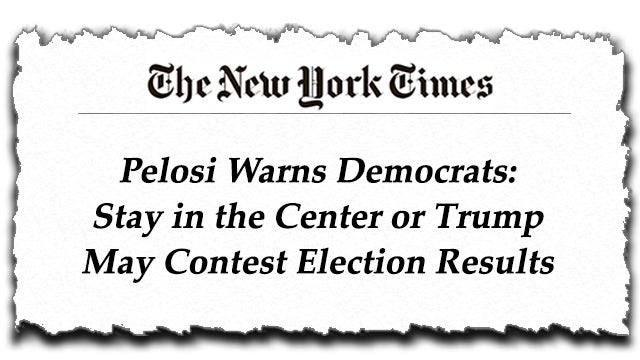 Now, is this not rich? From the party that still has not accepted the results from 2016. They are still trying to win that election. They’re still trying to corrupt the memory of that election. They are still attempting to convince anybody who will listen that Trump didn’t win that one, that he cheated, to the point that the Associated Press now is openly lying about the Mueller report. They’re just out there lying about it now. They’re actually saying the Mueller report contains evidence of collusion.

The AP, in the form of a fact check story. This is how they do this. And they’re just literally making up the fact that there was collusion. You can say they’ll never get away with it that. Well, they will with the people that read them and believe them and don’t read anything else. And they’re gonna be aided and abetted in this by the fact that Mueller is supposedly at odds with Barr.

You don’t think this stuff just happens randomly, do you? Barr writes his four-page letter that gets to the quick of it, the conclusions. It was not a summary. Barr did not write a four-page summary of the Mueller report. He wrote a report that got to the conclusions, what everybody wanted to know. There wasn’t any collusion, there wasn’t any obstruction.

Then we find out that Mueller writes a letter to Barr say, “I’m very unhappy with the way you presented this. You left out the context, you left out the drama,” whatever else he thinks. So immediately we have an opportunity for the Drive-Bys to say that Mueller says that Barr is misrepresenting what I said. That then opens the doors for the AP to conclude that the report does say that Trump colluded. Meanwhile, the House wants to come up and have Mueller come up and talk to them on May 15th.

He admits that they don’t know, but then writes that Papadopoulos’s answer “suggests” something. That’s how Mueller permitted himself to basically infuse his opinion of what must have gone on in an official report. I’ll explain this as the program unfolds. I’m getting a little bit ahead of myself here. But “Pelosi Warns Democrats: Stay in the Center or Trump May Contest Election Results.” She “does not believe President Trump can be removed through impeachment…”

It isn’t gonna happen. By the way, there’s this guy out there Al Green. (Not the singer.) Al Green is saying (paraphrased), “We gotta impeach Trump! If we don’t impeach Trump, then he’s not gonna lose in 2020. We’ve got to impeach Trump, otherwise he will win in 2020.” Does…? This is the thinking that the Democrats are going with, and Pelosi is essentially echoing a lot of this by suggesting that Trump cannot be removed through impeachment.

So she’s kind of countering Al Green. “[T]he only way to do it, she said this week, is to defeat him in 2020 by a margin so ‘big’ he cannot challenge the legitimacy of a Democratic victory.” Do you realize what an earth-shattering thing it is for the Democrats to think that the only way they can win an election is to win an election? I guess up to now, the Democrats have been thinking they can win by getting rid of Trump via impeachment or overturning the 2016 presidential election.

Here Pelosi is actually admitting the only way to get Trump out of the White House is to win the election (chuckling) and that’s news? What other way is there to get rid of Trump when they’re not gonna impeach him and they’re not gonna succeed in convicting him because of the makeup of the Senate? So it’s a big news story that the Democrats have realized the only way to get rid of Trump is to beat him? It has taken them 2-1/2 years to reach this conclusion? And, no, I’m not stretching her words here.

I know she said by “a sizable margin,” but still, isn’t the order of the day, you win elections by winning elections? But for the Democrats, obviously the last 2-1/2 years have been about trying to reverse election results and getting rid of Trump some other way. Now she’s deciding impeachment isn’t gonna work and she’s telling her caucus that they’ve gotta win 2020 — the presidential race — and it’s gotta be big, because if it isn’t, Trump isn’t gonna leave.

“’We have to inoculate against that, we have to be prepared for that,’ Pelosi said, [this] during an interview at the Capitol on Wednesday as she discussed her concern that Mr. Trump would not give up power voluntarily if he lost re-election by a slim margin…” Let me tell you what she’s really saying here. It takes somebody like me to interpret these people. They are so corrupt, and they use misdirection so artfully. 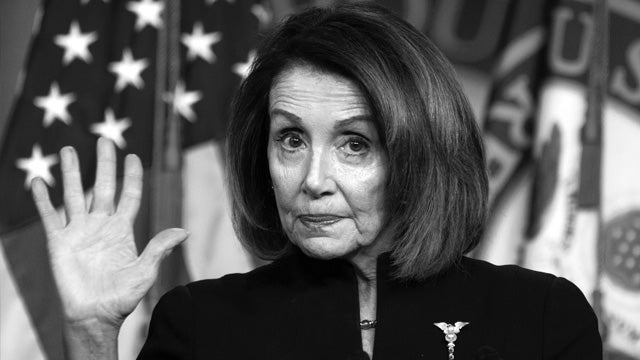 What Pelosi is really saying here is that if Trump wins by a narrow margin or if he only wins the Electoral College, the Democrats are gonna once again cry foul and refuse to accept the results. Remember the Democrats accuse Republicans of doing what they do. This is called projection. So Pelosi is actually saying that if Trump wins by a narrow margin, they’re gonna contest it again. She’s setting the stage for this by accusing Trump in advance, just like the Democrats did the last presidential debate prior to the 2016 election.

It was our old buddy and our old pal Chris Wallace who asked Trump the question if he would accept the results on election night if he lost. He said, “No. I’m not gonna sit here and tell you right now that I’m gonna accept those results. I don’t have any idea what’s gonna happen on Election Day.” And then Hillary blew up and started claiming Trump posed a direct threat to our democracy and our constitutional republic by admitting that he would not abide by the election results. And then the election happens, and guess who refuses to abide by the election results even to this day?

Her mind has been poisoned.

RUSH: By the way, NBC News has a poll (NBC News/Wall Street Journal poll), and in the latest, 75% of Republican registered voters say they have “high interest.” They’re really motivated. They’re inspired. They’re chomping at the bit. They can’t wait to get out there and vote in 2020. They registered a nine or a 10 on a 10-point scale, and 73% of Democrat voters say the same thing. Now, if you compare the Democrat enthusiasm to the 2018 midterms, then it is way down. 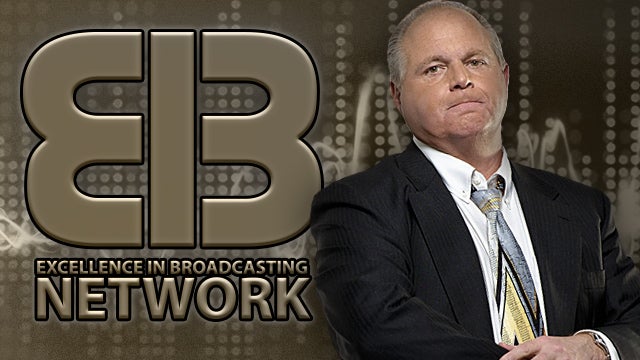 But the reason why this one is important to me is because if you pay attention to the Drive-By Media, Democrats all over this country are so revved; they’re really inspired. After the 2018 capturing of the House, now they can’t wait, they just can’t wait; they’re chomping at the bit. And the polling data from the NBC News/Wall Street Journal poll says they’re not chomping at the bit. Now, you put that in context with Pelosi out there saying, “Look, we gotta win! We gotta win big. We gotta win the election to get rid of Donald Trump.”

To get rid of the current occupant of any seat, you have to win an election. (laughing) Stop and think of that. (impression) “We’ve gotta beat Trump, and we can’t beat him by a small margin. We’ve got to clock Trump, we have got to stampede Trump, otherwise Trump will not leave. Trump will claim that there has been cheating or there has been voter fraud or what have you.” I’m telling you, this is Pelosi getting out in front of this, justifying Democrats taking action again if they lose, if whoever their nominee is loses — and I don’t care what the margin. 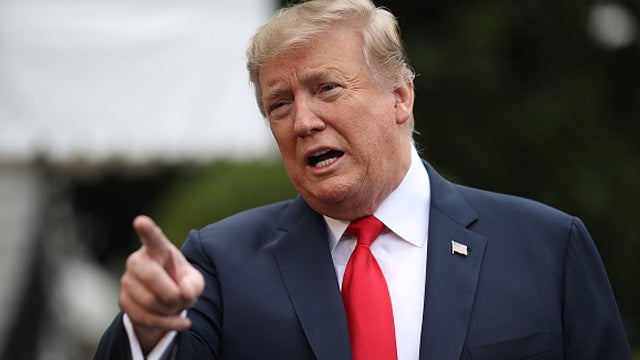 I mean, if it’s the within any kind of a questionable margin relative to the Electoral College, they are gonna go nuts. They’re gonna go nuts if they lose in 2020 regardless what the margin is, and they’re just setting everybody up here by projecting onto Donald Trump and the Republicans what they are actually planning. They thought the 2000 election was stolen from them, and therefore George Bush was illegitimate as a president for eight years, and then the election was stolen from ’em with John Kerry in 2004 by 55,000 votes in Ohio.