The Mystery of Rod Rosenstein

RUSH: We’re gonna start in Urbana, Ohio.  This is Lottie.  I’m glad you waited.  It’s great to have you with us.  Hello.

RUSH:  Thank you.  Thank you very much.  Great to have you here, too.

CALLER:  Well, I have something I want to run past you, and I want your thoughts on it.  I think the crap is gonna hit the fan after May 11th and Rod Rosenstein is gone.  I think that’s when the declassification could happen, and I’m not sure what I think beyond that.  I don’t know if they need Rod out of the way, or is he gonna squeal on people? You know, is he with Trump or is he against Trump?  What are your thoughts on that?

RUSH:  Based on that which I have just laid out, I actually don’t think Rosenstein is a major factor in this going forward.  The reason — and I could be wrong about this, but I don’t think whether Rosenstein’s still in the DOJ or not is gonna have any impact on what Barr does; it isn’t gonna have any impact on Trump declassifying.  Now, the reason people think that Rosenstein’s a major player is because up to now he has been. 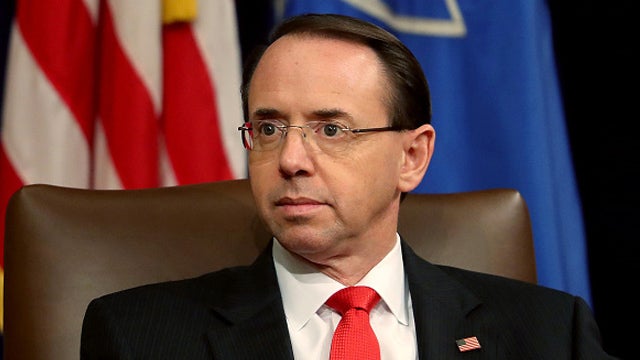 He’s been the guy that was refusing to declassify for Devin Nunes.  You know, members of Congress were demanding these documents, these origination documents and a number of other things that explain how this all began and why and who did it. Rosenstein said (paraphrased), “No. Over my dead body.”  So people thought Rosenstein is on the side of Mueller and the Democrats.  But I want to remind you that when Barr announced his press conference to announce that this report has got nothing in it, Rosenstein was one of two people standing behind him.

I heard numbers of differing theories on Rosenstein’s involvement here, that he is a Trump protector, that he was part of the cabal running the hoax and the scam against Trump.  I don’t think that whether he’s still at the DOJ or not… May 11th, I think, is the resignation date. I don’t think that is a factor going forward, unless — unless — it is known that he has had an obstructive role in unearthing the truth. I mean, a genuine obstructive role in people trying to get to the bottom of this. You know, then he’s gonna pay a price. 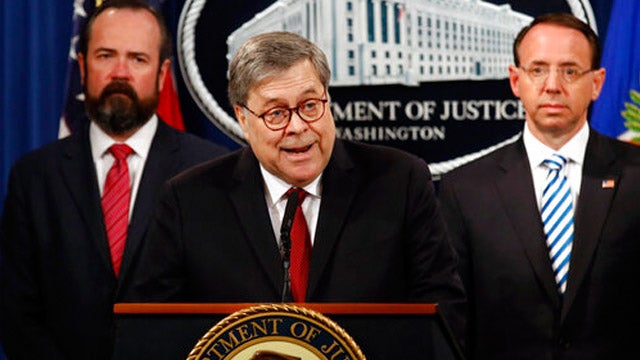 \He may be one of the people who is interviewed by the inspector general or has been.  But just because he leaves office does not, I think, open any floodgates.  I guess that’s the best way to answer that.  The floodgates are gonna open whether he’s there or not, but we know he’s leaving on May 11th.  He’s resigning.  He wanted to resign weeks before this, and they asked him to hang on.  I’m not trying to be disrespectful of your opinion.

I’m mindful of the fact that a lot of people think Rosenstein was one of the major obstacles to Trump and one of the primary assistive wheels, shall we say, of the whole Mueller investigation effort, because it was Rosenstein that chose Mueller; it was Rosenstein that would not intercede.  Like Mueller has known for a year and a half (longer than that) that Trump did not collude.  That’s why we have to get to the bottom of this.  He’s known that.  He ruined people’s lives in the process while knowing that there was no reason to!

People’s lives have been ruined because of crimes committed after this investigation began that had nothing to do with this investigation.  That, to me, as got to stop.  This process crime stuff has got to stop.  People are being ruined by virtue of intimidation.  Papadopoulos even says that Mueller’s team told his wife, “You know, you better let go of George.  George doesn’t have much of a future here.”  I mean, they’re telling this to Papadopoulos’s wife or fiancee, whatever she was at the time.

What…? What business is it of theirs?  But this is the technique. This is Weissmann, primarily, who was the pit bull for Mueller.  But Mueller permitting this kind of stuff is outrageous.  I hate this process crime stuff anyway, because it basically uses a power that the average citizen will never have the ability to fight, and that is the full-fledged resources — including the prison system — of the United States government.  So they come to you and they threaten you to tell them what they want to hear, even if it’s not the truth.

This is what happened in the Ted Stevens case. They suborned perjury. They made their star witness testify to things that weren’t true, the prosecution did. And many of these same guys are on the Enron task force. They had no business being on Mueller’s team. But there they were.

So they come along and they threaten you with jail, they threaten with destroying your family, breaking you, taking away every asset you’ve got in legal fees unless you tell them what they want to hear.

You know, I’m a big law-and-order guy, but the Supreme Court decision that granted the cops the power to lie to get a confession, I know it’s a close call. The cops are sitting there, and they know a perp did it, but they’re never gonna be able to prove it, so they need a confession. So in those circumstances they are permitted to lie to the perp to scare the bejeezus out of them.

Well, in this case there weren’t any perps! There wasn’t any collusion! And yet these guys are running around trying to get people to agree or confess to crimes that are essentially being created by Mueller and his team.

To me this whole thing is outrageous. People that are in the criminal justice system, this is their day-to-day existence, “Well, hey, it’s just what we need. It’s one of the tools that we have.” But, you know, when you are a person and you’re the essence of innocence, you’ve not commited these kind of crimes, you look at the way this stuff happens… What if Mueller had decided I have some ability to put Trump away and came knocking on my door and made me say things?

Well, it may be, but it’s not right. And that may be naivete speaking. But it just, to me, seems going a bit overboard. Because especially in this case, there wasn’t anything, there were no crimes, there was no collusion. Mueller was trying to create crimes or get people to admit to crimes that had not been committed and knew for 18 months minimum there was no — why not an interim announcement?