Obama Did Not Escape the Office Unscathed

RUSH: Wichita. This is Cindy. You’re next. It’s great to have you here. Hi.

CALLER: She loves Liberty. But my thing to you, I’ve been a Dittohead since 1990. I saw you in Kansas City at the Midland Theater when you did a stand-up there.

RUSH: Oh, yeah. Back in the nineties. Yeah. I remember that.

CALLER: True ditto, true Dittohead. My cup runneth over. But, anyway, I just want to tell you that I agree with you totally. I’m a conservative, been since 1985. My first presidential election was Reagan, and I’ve been a conservative since then. My thing is, Biden, it’s not gonna help him having Obama at his back because Obama wasn’t a strong president. It’s only gonna hurt Biden.

RUSH: You know, it’s interesting you bring up Barack Hussein O here. By the way, grab Cindy’s address, Mr. Snerdley. We need to send her a Liberty doll for Olivia and some Revere stuff. Peter Baker is a journalist for the New York Times, and he has written a book about Barack Hussein O. And he updates this book periodically as new information becomes available.

The book is called Obama: The Call of History. And there is a new revelation from Peter Baker about Obama. And it is… are you ready for this? It turns out that Obama did not think that Hillary Clinton was the most qualified person to ever run for president.

If you remember at the Democrat National Convention in 2016, Obama’s wandering around upstage and the Clintons are out in the audience, and Obama looks to Bill and says (paraphrasing), “Bill, you know, you and I, we have to admit this, we’re not even in her league. I mean, she is so much more qualified than we are, buddy. She’s just maybe the most qualified person to ever run.”

You know, I’m watching this in stunned disbelief. I can’t believe Obama’s ego would permit him even that brief moment of humility. Well, it turns out he didn’t believe it. Peter Baker, New York Times, reveals that Obama was unhappy with Hillary Clinton and her failed, soulless campaign, his words, soulless, and that he saw her loss as a personal insult to him. 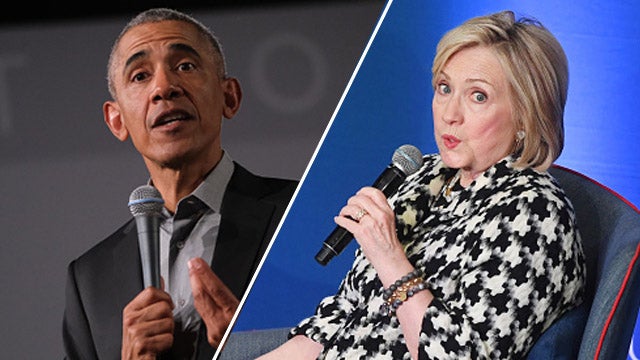 Former President Barack Hussein O, comma, The One, comma, “was unhappy with Hillary Clinton and her failed ‘soulless campaign’ in 2016, saying he saw her loss as a ‘personal insult.’

“The new edition, which includes Obama’s reaction to the 2016 election, said Obama compared himself to Michael Corleone, the titular character of The Godfather. Obama thought he ‘almost got out’ of office untouched, like a mob boss avoiding a hit job.

“Obama found himself shocked by the election results, thinking before Nov. 8 there was ‘no way Americans would turn on him’ and ‘[h]is legacy, he felt, was in safe hands.’”

This buttresses everything I thought. He was running around campaigning for Hillary, but he wasn’t campaigning for her. If you recall, he was urging people to essentially continue his agenda. (Obama impression) “If you want more of me, if you want a third Obama term, then you gotta vote for Hillary Clinton.”

And he was out there making it clear that in his mind this was all about continuing his legacy and keeping the roots of his legacy planted and growing. And he was rejected. He was rejected by the American people, and now he can’t stand it, he can’t deal.

I knew this was gonna be the case. He’s out there now blaming Hillary for running a lousy campaign, a soulless campaign. And I’ll tell you something else. Obama thought he almost got out of office untouched. He’s not gonna get out of office untouched. With all of this that Barr is doing, when this is fully revealed, it’s going to be discovered that much of this happened either with his knowledge or with his instructions intact.