RUSH: I’ve been thinking of fundraising ideas. What’s Trump’s nickname for him, Sleepy Joe? I might have preferred Creepy Joe. But Sleepy Joe works. Now, we have here what we think might be a good logo for the Biden campaign. I want to flash it up there for you on the Dittocam. Right there it is. Joe hugging the “B” and smelling and sniffing the “B” in his own name, embracing it and so forth. 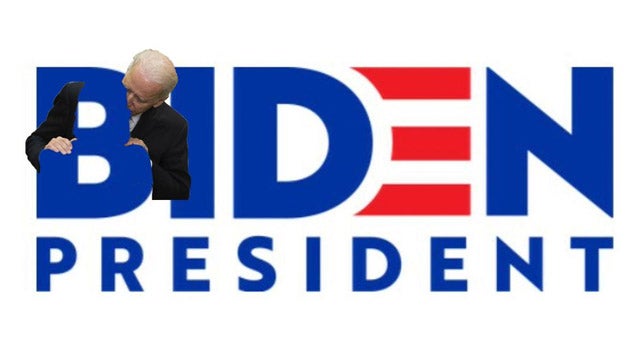 But in addition, how about as a fundraising vehicle for Biden, you know, you got some problems out there, and people are mocking and laughing at you, you gotta face that stuff head on. You can’t camouflage it. You can’t hide it. You can’t deny it. So how about a hug-athon designed to raise money from women. For the opportunity to be hugged by Joe Biden, for the opportunity to have your hair smelled by Joe Biden, donate 100 bucks, you get your picture taken with Washington’s greatest hugger and greatest hair sniffer.

I have put this to the test. There was a golf outing at Sage Valley in South Carolina. It’s 15 miles from Augusta. It was the week before the Masters. And there were some people there who met me who wanted a photo. So I asked, “Would you mind if I did a Joe Biden in the photo?” And they all said, “Please do!” And it became a big joke, and everybody wanted in on it.

So I was taking pictures sniffing hair and hugging shoulders and so forth. No, I’m not worried about the photos getting out because everybody knew what it was, “Oh, you’re doing a Biden, this is great!” Nobody thought it was me being Biden. It was me doing Biden. It tells me that there’s a gob amount of money out there for people. I think Joe ought to announce the hug-athon. I think he ought to have hug-athon fundraiser, he’ll sniff the hair of any woman who wants to give him a hundred bucks, he’ll hug them and do whatever. Hugs all over America. I mean, you could have one of these in every city. You gotta deal with this head on. He can say he will not sleep until he has hugged the last female donor. Maybe making smelling the hair an additional $50. Maybe just the hundred dollars gets you the hug. And the minimum hug time is 10 seconds.

Now, you’d have to have a waiver. I mean, all huggees would have to sign a waiver promising not to sue Sleepy Joe for sexual harassment. Could you feel the excitement of this? Can you imagine one of these fundraisers? Can you imagine the media showing up at a “you can be hugged and hair snuffed by Joe Biden” for 150 bucks? It would be big.

Here’s a piece at TheWeek.com by Matthew Walther: “Joe Biden’s Campaign is Going to be a Parody of Itself.” Let me just read to you a few excerpts, a couple of pull quotes here.

“Here comes everybody. Bernie Sanders and Kamala Harris and Beto and Mayor Pete and 15 others and, finally, Joe Biden. CNN reports that Biden will be formally announcing the launch of his presidential campaign today with an online video. Then, Axios tells us, he’ll give a speech about ‘the moment’ and ‘the kind of leadership’ we need — i.e., his. Next he’s going to a fundraiser with the executive vice president of Comcast.”

Oh, Comcast, that’s NBC. This would be a perfect place to do the hug-athon fundraiser with the Comcast guy because they got cameras at NBC, could videotape it.

Then this guy Matthew Walter writes, “You can’t make this stuff up. Biden is said to have already begun making private calls to donors, most of whom are probably only too glad to pony up for what is being called a ‘third Obama term.’ Does anyone care about the fact that Biden has no discernible political agenda or ideas apart from his conviction that he is simply the man for the job? Does it matter that he has been in politics long enough to hold positions on whether gay people should be allowed to work for the federal government (his answer was no)?”

Not only was he in favor of the Defense of Marriage Act, he opposed gay people working for the government. That’s how long Joe Biden has been in Washington. “Shouldn’t we all be a bit creeped out by his nonchalant dismissal of his own hair-sniffing antics as a desire to ‘connect’ with people and by his bizarre sense of entitlement to our nation’s highest office?” They asked the question, “Why are you sniffing women’s hair?”

“Well, you know, I have this desire to connect with people.” That’s not how you connect with ’em. “Biden’s candidacy is going to be a parody of itself. Get your bingo cards ready for the debates, folks. He’s going to talk about being ‘a little rough around the edges,’ about how ‘times have changed,’ about how he admires young people for their ‘energy’ about things like the Green New Deal and Medicare-for-all but [Joe’s gonna say] he’s ‘seen a few things’ in his time.” He’s seen a few things and he knows from all the things he’s seen you can’t do half of this stuff.

“He knows the difference between what sounds like a good idea and what’s practical.” Joe’s been around. Joe’s seen everything. Joe knows everybody. Joe’s done a lot of things, and he knows what can be done and what can’t. “He cares about doing what’s right, but also about getting things done, even if it means ‘reaching’ — no pun intended — ‘across the aisle.'” Meaning this guy thinks that Biden’s campaign is going to be one tired, worn-out cliche after another.

“Has he made a few mistakes over the years? Yeah, sure, and he owns up to them. But he knows better now. He’s ‘willing to listen,’ maybe even ‘to learn.'” If you like “Dick Morris triangulating” cliche, get ready for Joe Biden. So these are people that want the Democrats to win the presidency, who are now starting to make fun of the kind of politician that Biden is.