Now, how many delegates did Jeb Bush get? He got three. They spent a hundred million dollars. With the lead Republican consultant of all time, Mike Murphy, running the operation, they got three delegates. From New York Magazine — Biden’s campaign is resembling that of Jeb Bush. That is not a good sign. 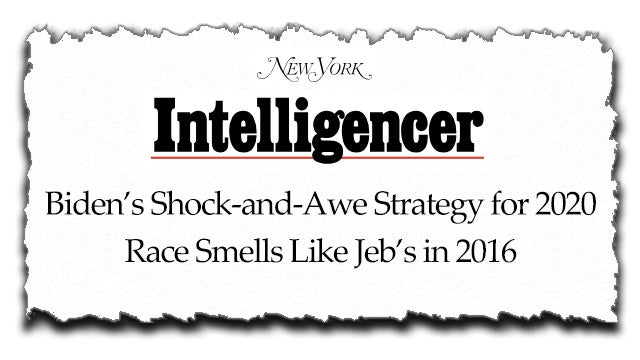 Crazy Bernie voters — Biden is the only guy that has a — but he can’t get the nomination. He’s never gotten the nomination. Nothing to do with age. He’s just gonna muck it up! He always does. He’s a walking gaffe. They can’t even get his announcement straight. First he was gonna announce in Charlottesville, Virginia, on Wednesday, today. 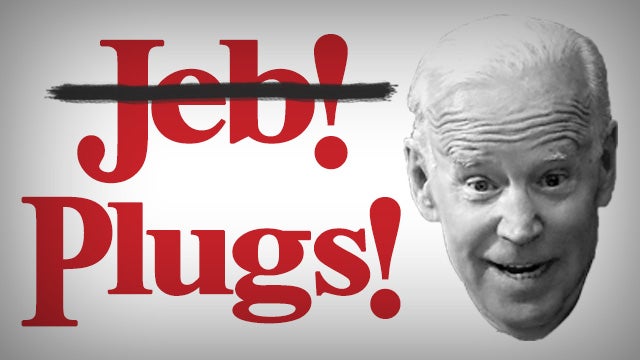 So the announcement gets put off from today ’til tomorrow, and there are some who think that it may not happen tomorrow either. CNN’s doing their level best to report this as a fait accompli. And I know what they’re doing. They’re trying to force Biden to do it. There’s a lot of people on the Democrat side and the media as well who know that Biden is reluctant to pull the trigger.

He’s out there saying he can’t wait, he wants to smash Trump’s nose, he wants to get Trump and take him into the back and all this stuff. But there are a lot of people saying that’s just a bunch of bluster. He hasn’t made up his mind about this. There’s a lot of people trying to force him to do it precisely ’cause of what I told you. A lot of people the Democrat Party know full well that Bernie is not gonna be elected president and neither are any of these others.

And Biden — there’s so much irony in this party. Supposedly it’s revolutionary with its focus on diversity, which would mean their nominee should be a one-eyed gay amputee female who served in the Boer wars in South Africa just to cover all the bases. But they can’t find the ideal candidate. But if it ends up being some old white guy, I mean, what’s the rest of the progressive movement about? What is it for?

RUSH: Look at already people writing, “Your comments that you just made about Biden will show up in a campaign ad: ‘Joe Biden’s the only guy could possibly beat Donald Trump.'” Good! Good! You remember Muhammad Ali and the rope-a-dope? Enough said. All right, let me go to the phones. We’re gonna start with Andrew in Aurora, Colorado. Welcome, sir, and it’s great to have you on the EIB Network. Hello.

CALLER: Thanks, Rush. You’re on fire today. The Democrats are putting Biden in as their relief pitcher to narrow the field and to get rid of the ones that have no chance and to concentrate the money donations that come into the Dems. He’s there to clean it up. They’re not serious about him really running to the end. He’ll drop out for some reason because he’s there to help get rid of Bernie, who got politically sidelined by Hillary.

RUSH: You can’t. You can’t get rid of Bernie. That’s the point.

CALLER: Well, he’s gotta narrow that field down of the Democrats — and that’s, I think, his main purpose.

RUSH: Thin the herd, narrow the field so that the —

RUSH: “Diluted,” I think, would be the word.

RUSH: That… Yep. I will take this under advisement and thought. I… (sigh) We should not lose focus of something here, that these Democrats… Nobody on the left right now is rational, folks. Do not make the mistake when analyzing, of thinking we’re dealing with rational people. They are out of their gourds. They have been poisoned with hate. They’re running around swallowing failure. They have failed! They targeted Donald Trump before he got the nomination. That didn’t work. They targeted Donald Trump before he won the presidency. That didn’t work.

They tried to effectively make it impossible for Trump to be inaugurated by doing all kinds of damage during the transition period. That didn’t work. When that didn’t work, they then went after Trump after he was inaugurated, and that hasn’t worked. They are walking failures, every damn one of them, and they are obsessed with it. They are beside themselves. They’re out of their minds! They can’t believe it. They and the media, united together, have not been able to get rid of Trump? So that’s all they’re focused on.

When analyzing these people, we have to pretend to be irrational ourselves — and I don’t know about you, but as a rational person, I have to work hard to be dumb and stupid and irrational. And frankly, I don’t want to work that hard. So that’s why I have perfected my understanding of the left. And right now, we’re dealing with people who are immersed in irrationality. They are focused on one thing, and that is getting rid of Donald Trump. They don’t care right now how, and they don’t care who. It’s just getting rid of Trump.

Do you realize how irrational it is to think that Joe Biden could get the nomination in this current crop of Democrat nominees? Do you realize how irrational it is to believe that Joe Biden could be elected president? Joe Biden has run for president twice, at least, before — and in the first campaign, he was exposed as a plagiarist. There was a Labour Party candidate over in Great Britain named Neil Kinnock. He had one of these little violin sorrow stories about hard luck and hard work and, “Oh, woe is me,” and what he overcame — and Biden lifted it word-for-word!

He got caught as a full-fledged plagiarist, and that ended that campaign. There are Biden gaffes, audio and video, in archive files all over this country, newsrooms all over the place. He hasn’t ever gotten close. Biden is seen as the closest thing right now that they could get to recapturing the days of Obama. They can’t get out of the past. They can’t do it! I’m not saying that we’ve already got this in the bag. Don’t misunderstand. Just don’t attach rationality to these people yet as you analyze ’em.

RUSH: And, by the way, folks, let me tell you what Biden’s silver bullet is even if he does start making tracks, if he does announce and if he starts getting any traction out there. Joe Biden has a silver bullet. There is a giant sinkhole waiting to swallow him up, and that is the sweetheart deals he wrangled for his son with none other than Ukraine. They are big — and I’m gonna tell you, they are a thousand times worse than anything Paul Manafort was even accused of doing. And there are some other pitfalls for Plugs as well.