RUSH: Let’s stick with the lighthearted news, this being Open Line Friday. “Boston Globe Publishes, Then Edits Op-Ed Encouraging Waiters to ‘Tamper With’ Trump Official’s Food.” So it’s a dirty political trick for Trump to be thinking about sending illegal immigrants to sanctuary cities, and William Barr should not be using the word “spying” when talking about what the FBI does. That’s somehow a dirty political trick, and so is Trump sending illegal immigrants to sanctuary cities.

But the “Boston Globe Publishes [an] Op-Ed Encouraging Waiters to ‘Tamper With’ Trump Official’s Food — The Boston Globe found itself in hot water on Wednesday after publishing an opinion piece from a man who said he regretted ‘not [urinat]ing’ on a Neo-conservative pundit’s food and encouraging waiters to ‘tamper’ with the food of outgoing Homeland Security Secretary Kirstjen Nielsen. The article, titled ‘Keep Kirstjen Nielsen unemployed and eating Grubhub over her kitchen sink,’ was written by Luke O’Neil, a former waiter and occasional writer for the Globe. 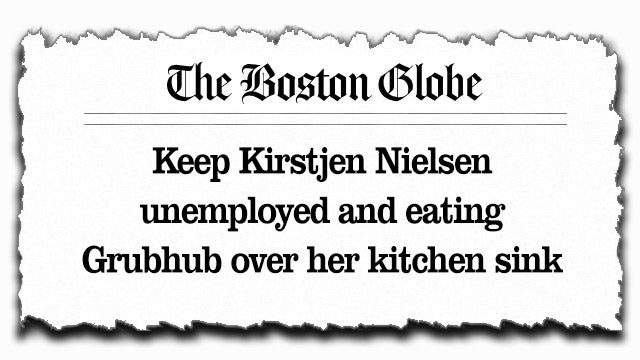 “A ramekin of blood on the side might have been the better option, come to think of it, he always did seem really thirsty for [blood].'” The Boston Globe published this crap! “O’Neil originally concluded the op-ed encouraging food service employees,” that’d be waiters, for those of you in Rio Linda, “to ‘tamper’ with the food of a Trump official: ‘As for the waiters out there, I’m not saying you should tamper with anyone’s food, as that could get you into trouble. You might lose your serving job.

“‘But you’d be serving America. And you won’t have any regrets years later.’ An editor’s note at the top of the article now reads: ‘A version of this column as originally published did not meet Globe standards and has been changed. The Globe regrets the previous tone of the piece.'” Wait a minute, now. Somebody passed on it. Somebody looked at it, some editor — at least one — and signed off on it and authorized it for publication.

What’s happening to these people? This is the Twitterification of the Democrat Party writ large. This is the kind of crap that now comprises the Democrat voting base. How else to explain the Boston Globe signing off on this and authorizing its publication, and then not taking it down but rather ” stealth edit[ing] for ‘tone.'”! You ask, “Who are these people?” Well, they’re not us. These people are sick. They are deranged, lunatic, sick — and they’re also desperate as they can be to be noticed, obviously.