Seattle Is What Happens When Liberals Run Things

RUSH: Now, as I mentioned earlier, I have this great illustration of what happens when the radical left ends up unopposed running anything. The latest example of this is Seattle. There’s a story here actually in the Seattle City Journal. Headline: “A Brewing Rebellion in the Emerald City — Seattle residents are losing patience with the city’s out-of-control homelessness problem.”

“For the past five years, like many of its West Coast counterparts, Seattle has endured a steady expansion of homelessness, addiction, mental illness, crime, and street disorder. But the activist class –” not to be confused with the political class, “—the activist class — a political and cultural elite comprising leaders in government, nonprofits, philanthropy, and,” looky here, “media.”

Wait, whoa, whoa, whoa, whoa. Why would media be considered to be part of the activist class? That’s not what media — media is the news; right? Media is journalism. The author here, Christopher F. Rufo, R-u-f-o — my point here is not media. It just happened to be included in the opening paragraph here.

“The activist class—a political and cultural elite comprising leaders in government, nonprofits, philanthropy, and media—has enforced a strict taboo on declaring the obvious: something is terribly wrong in,” Seattle. Wait a minute. Are you telling me that the elites, the activist class have even prevailed on the media not to report something so out of control as rampant addiction and homelessness? Well, then, whatever that is, it isn’t media.

“Last month, veteran Seattle reporter Eric Johnson of KOMO violated that taboo with a shocking, hour-long documentary called Seattle is Dying,” on a local station “which revealed how the city has allowed a small subset of the homeless population—drug-addicted and mentally-ill criminals—to wreak havoc.

“Johnson’s portrait is backed up by evidence from King County homelessness data, by city attorney candidate Scott Lindsay’s ‘prolific offender’ report on 100 homeless individuals responsible for more than 3,500 criminal cases,” Stop think of that. One hundred homeless people are responsible for more than 3,500 criminal cases, and by Mr. Rufo here and his own reporting on the homelessness crisis. Seattle is Dying is the name of the documentary.

“In the past two weeks, Seattle Is Dying has garnered 38,000 shares on Facebook and nearly 2 million views on YouTube. The report has clearly resonated with anxious, fearful, and increasingly angry Seattle residents. Exhausted by a decade of rising disorder and property crime—now two-and-a-half times higher than Los Angeles’s and four times higher than New York City’s—Seattle voters may have reached the point of ‘compassion fatigue.’

“According to the Seattle Times, 53 percent of Seattle voters now support a ‘zero-tolerance policy’ on homeless encampments; 62 percent believe that the problem is getting worse because the city ‘wastes money by being inefficient’ and ‘is not accountable for how the money is spent,’ and that ‘too many resources are spent on the wrong approaches to the problem.’ The city council insists that new tax revenues are necessary.” Of course.

So here you have an epic problem. Seattle’s homeless problem is epic. The people that live there see it. They want it fixed. But the activist class, political and cultural elite, comprised of leaders in government, nonprofits, philanthropy, and media have decided to run the city by telling them, “Don’t believe what you see. We don’t have a runaway homeless problem. It isn’t true. Everything’s fine.”

Rather than address the problem, liberals in the city are literally creating a process to discredit the reporting in that documentary and not fix the problem. “According to leaked documents, the City of Seattle and its allies have retained a crisis-communications firm to discredit,” the reporter, Eric Johnson, and insist, despite all evidence to the contrary, that “Seattle is making progress to end homelessness, and proven solutions are working.”

It’s like Orwell’s Ministry of Truth. “It’s quite a strategy: Seattle mayor Jenny Durkan is using taxpayer resources to attack a respected local journalist and convince taxpayers that they shouldn’t trust their own experience,” with homelessness and addiction and piles of human feces on the streets.

“After dictating homelessness policy for a generation,” like 25 years, “the activist class is losing the narrative—and this accounts for its increasingly desperate counterattacks. As their support among voters erodes and principled journalists,” like this one guy, Eric Johnson, “break the silence about homelessness, they fall back on branding their concerned neighbors ‘bigots,’ ‘fascists,’ and ‘white supremacists.’”

So in Seattle, the activist class is referring to left-wing uber-leftist citizens, ’cause that’s who lives there, who dare to mention the homeless and addiction problem, they are being called bigots, fascists, and white supremacists.

Look. What’s the point? What happens next is people are gonna start leaving Seattle. It may not be imminent, but with crime and homelessness worse than Los Angeles and New York, the only thing keeping people there is the climate. Well, and their careers. But once people start leaving, the point is they take the exact stuff with them that elected people that run the place now, and transfer it to wherever they move to and corrupt that place wherever it happens to be.

But just another bit of evidence, folks, that whether it’s Venezuela, whether it’s Cuba, whether it is an American city, take your choice, whether it’s a little town, whether it’s a county, if it is run unopposed by leftist liberals and socialists, it is going to be a hellhole. It is going to end up being a disaster. Basic human hygiene and services will not even be maintained, despite the highest tax rates you’ll find anywhere nearby.

Despite all the compassion they claim to have, despite all the concern for the downtrodden and the homeless and the hungry and thirsty, those very people never are assisted, they are never improved, their circumstances are never improved. Their numbers just grow. Liberalism doesn’t fix a damn thing except it makes the people who are liberal think they’re good people because they at least see the problem and, “Oh, my God. You see that, it’s horrible.”

Wow. You’re a good person. “I know. I know. It’s so sad. Look at that right now in the street, see what’s –” Boy, you have such a big heart. “I know. It’s so hard to see this.” We need more people like you who can see it and care about it. “Thank you. Thank you. I’m just trying to do my best. My garden and avocados and that’s all I want because I can’t bear to watch.” You’re such a good person. Keep voting Democrat. “Thank you. Thank you so much.”

RUSH: Isn’t it about time for a new movie? Homeless in Seattle. 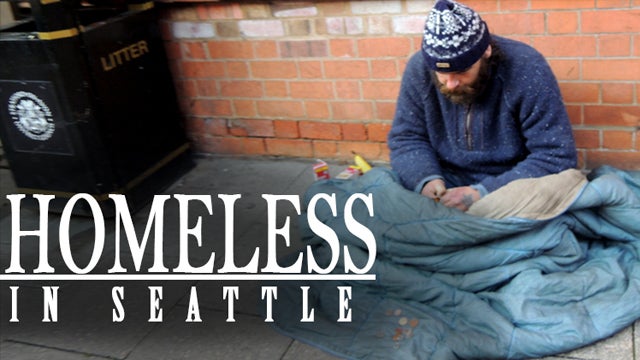 Sequel to Sleepless. Surely a good liberal out there could be enticed to make the movie.