LEE HARRIS: (teletype sfx) The president specifically called out House Intelligence Committee Chairman Adam Schiff, who’s still insisting there was collusion. He called Schiff “Pencil Neck,” a line he apparently picked up from Rush Limbaugh. And the president warned that those behind what he called the greatest hoax in the history of our country would be held responsible. This led the crowd to start chanting, “Lock them up.”

RUSH: “Lock ’em up.” Now we move over to CBS This Morning, political correspondent Ed O’Keefe reporting about Trump’s rally last night in Grand Rapids, and Gayle King weighed in at the end of this one. 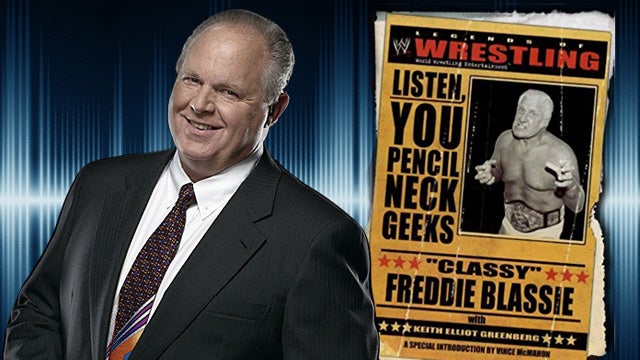 O’KEEFE: And thank you very much. We wish you a slow news day today on this Friday.

RUSH: Well! Look what gets under their skin. Look what gets… You know, this Pencil Neck business, folks… Many of you know — and we’ve acknowledge it — that the originator of this phrase is a former great character in professional wrestling named Freddie Blassie. He nicknamed several of his opponents “Pencil Neck Geeks.” That’s what he called ’em. So I appropriated that, but I eliminated the word “geek” so as not to thoroughly copy Freddie Blassie. Now Pencil Neck, it’s being recycled. But Freddie Blassie is the original guy that coined all this, and that has to be said.