RUSH: Up next is Jeb Bush as we move on. This is today on CNN’s Inside Politics. They played a preview clip of tomorrow’s episode of The Axe Files. This is David Axlrod’s podcast. Do you know what podcasts are, Snerdley? What are podcasts? (interruption) Now, that’s… (interruption) No. (interruption) That’s technically what they are. But I mean in the real world, what is the purpose of a podcast? The podcast is the liberals failing to do talk radio, so they go to podcasts. That’s what podcasts are. Now, we were first with podcasts. We were first to podcast this program.

We were listed when Apple first introduced podcasts to iTunes. We were on the list of first original offerings. We date back to the beginning of podcasts. But I’m telling you, the left has infiltrated the entire podcast meme because they can’t succeed on talk radio. I mean, more power to them. Don’t misunderstand. I’m just telling you what it is. There’s a lot of conservatives that do podcasts too. But I’m just telling you: For the left, that’s an attractive thing. That’s why they promote ’em all over the place. Anyway, Jeb Bush was on Axelrod’s podcast. They’re talking about whether or not there will be a primary challenger to Trump on the Republican side.

JEB: I think someone should run just because Republicans ought to be given a choice. It’s hard to beat a sitting president. But to have a conversation about what it is to be a conservative. I think it’s important. The Democrats now are proposing new ideas, some of which I think are way out there. And if Republicans think they can just say, “That’s bad,” and not offer a compelling alternative, that can be bad for us.

RUSH: This right there is one of the big problems. In fact, I saw it earlier today while watching Fox. You notice what Jeb said here? “[I]f Republicans think they can just say, ‘That’s bad,’ and not offer a compelling alternative, that can be bad for us.” So I’m watching Fox today, and I think… Yeah, it was Sandra Smith. She was interviewing somebody. I don’t even remember who, but it was about the Green New Deal. And her question to whoever she was talking to, “Well, what is the Republican answer to it? 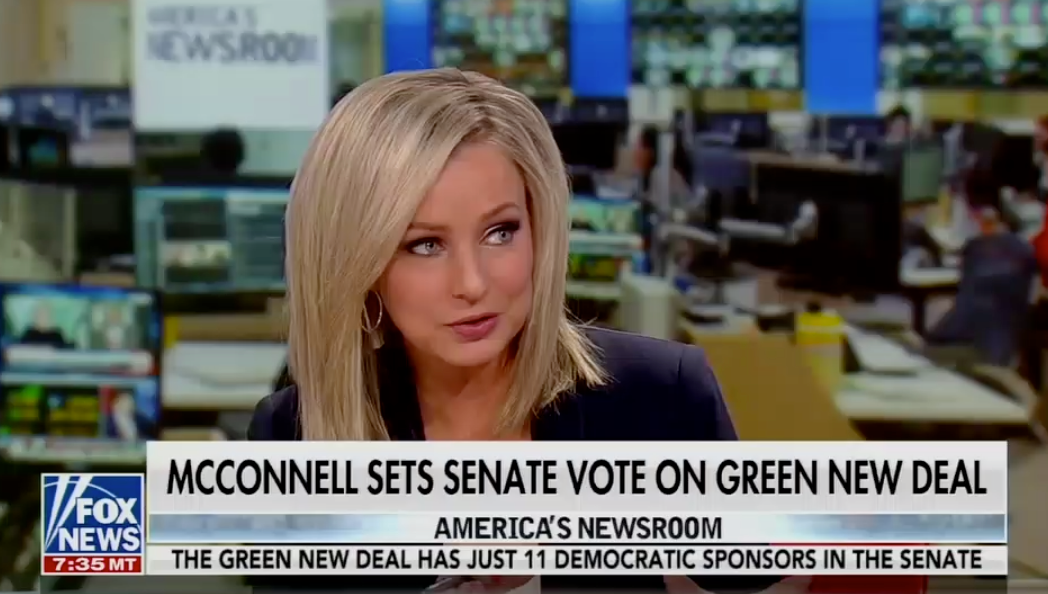 “So Mitch McConnell’s gonna have the vote and they’re gonna try to defeat it. What is the Republican answer to it?” You see the trick here? The Democrats propose anything — in this case, the Green New Deal. It’s literal insanity. Why do we have to have our own version of it? This is how the left sets the narratives. This is how the left establishes memes. This is how the left moves their agenda! We’re sitting around, biding our time, minding our own business, trying to keep all these outside influences away from us.

The left comes along with some brand-new, hare-brained idea, either national health care or climate change, Green New Deal, and Jeb Bush just said, “It’s not enough to say ‘no.’ We can’t just say no. We have to come up with an alternative!” No, we don’t have to come up with an alternative. If climate change is a hoax, why do we need to have any kind of an alternative to deal with it? Why can’t our plan be to illustrate why people and how people are being lied to about this?

Without getting into the weeds of climate change, ask them, “Why in the world do you think you’re not paying enough taxes?” and spell out the dollar amounts and how much this is gonna cost, and tell ’em how much freedom they’re gonna lose, and tell them how much more difficult life is going to get. Why do we have to join in in this? Virtually every idea the Democrats have, the Republicans come along and think they have to have an answer to it.

Our answer is, “Well, yeah, not a bad idea, but we’re gonna do it the smarter way, and we’re gonna do it with the small-government way.” I have… This has always been a pet peeve of mine, and I think it’s how the Republicans always end up sabotaging themselves and always end up helping advance the liberal agenda with exactly this kind of thinking. “If Republicans think they can just say, ‘That’s bad,’ and not offer a compelling alternative…” Now, Jeb might be talking about an overall generic alternative — and if he is, then I’ll give him credit for that.

But there is no alternative to the Green New Deal!

What, the Yellow New Deal: Proceed with Caution?

What? There is no alternative to it. It’s a bad idea! It need not ever see the light of day. We need not help it along at all. And the idea that we can’t sometimes just say, “That’s bad,” and have that be our position? Why the hell not! If it is bad, if something the Democrats propose is injurious and damaging and horrible, what’s wrong with just saying that? Why do we have to come up with our own alternative to whatever their scheme is? We always do it, and it’s a flat-out mistake. (sigh) It just bugs the heck out of me.