Did You Hear What Putin Said on International Women’s Day?

CALLER: Hey, Rush. I’m wondering when you think Elizabeth Warren will be issuing her statement denouncing the college admissions scandal.

RUSH: That’s a good question. Pocahontas, when will she — yes, yes. Because she of course gamed it on the academic side. Exactly right.

CALLER: Right. Her statement will sound like crickets on a warm summer night.

RUSH: Which is not a bad sound. I like crickets on a warm summer night.

CALLER: Right. If I was a reporter, I couldn’t get in front of her quick enough to ask her that question.

RUSH: Well, I don’t think she will be asked. I think she’s protected status on this. We’ll have to wait and see. Somebody somewhere may ask her, but I don’t think it will be the Drive-Bys.

Hey, did you see what Putin said about International Women’s Day? (interruption) Oh, are you kidding? Nobody made a big deal — this happened when I was out. On International Women’s Day, Vladimir Putin thanked women for taking care of the home and staying beautiful. Is that not classic? I mean, that is one of the biggest goose jobs — eh, eh — I mean he’s just ramming it down the throat of the feminazis! I thought for sure the Drive-Bys would make a big deal out of this and link him to Trump!

“Russian president Vladimir Putin congratulated Russian women for everything they do in life, like taking care of the home and staying beautiful. He made the remarks to a group of Russian female policewomen on International Women’s Day, which was celebrated throughout the Soviet Union.” 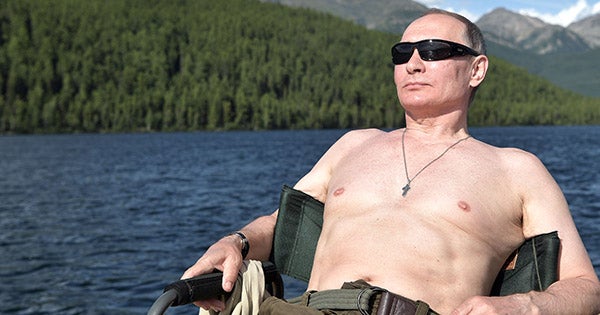 We know that in Saudi Arabia if a woman is raped, it’s considered her fault. So what strain of Islam is it that gives us Rashida Tlaib and Ilhan Omar? Where are their domineering husbands? They’re obviously not there. I mean, I probably shouldn’t ask the question. I’m not asking it for any presumed answer. I’m asking it out of legitimate curiosity.