RUSH: One of the big allegations yesterday that Michael Cohen made is that Donald Trump is a flat-out racist. And we saw how this rears its head on the left. There is this militant freshman member of Congress from — I can’t remember her name. It’s Tlaib or something like that. Anyway, she accused Mark Meadows of being racist. Where is her name here? Rashida Tlaib, Democrat, Michigan. 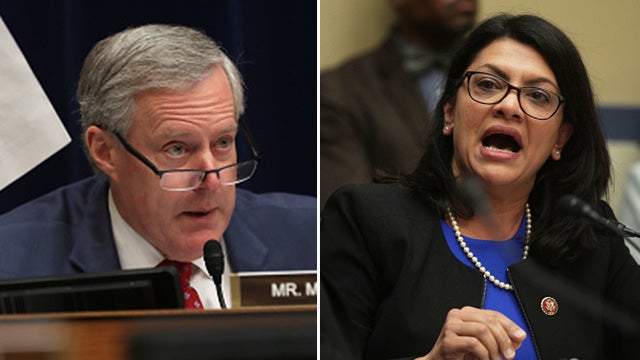 She’s Palestinian. And I guess all of a sudden Palestinians have become persons of color in the Democrat Party because they’re not white! And Mark Meadows invited to sit behind him during the hearings yesterday, Lynne Patton, who has worked for Trump for years, she’s African-American, she is in Housing and Urban Development. And this woman, this Palestinian from Michigan, Rashida, she is the one that earlier this year in a public appearance talking about Trump said, “Impeach the MF-er. We’re gonna impeach that MF-er.”

So she’s now an aggrieved, approved minority because she’s not white. And she accused Mark Meadows of being racist because he used an African-American woman as a prop to prove that he’s not a racist! And the very fact that he did that means that he’s a racist! And Mark Meadows flipped his lid over this, justifiably. It’s a classic illustration of how the left operates.

Cohen was calling Trump a blatant racist. And this happened to Mark Meadows. Grab sound bites 11, 12, 13, 14 here. This is how it happened. And, again, this is the same congresswoman who referred to Trump as an MF-er at a rally and yesterday during her questioning period she called North Carolina Congressman Mark Meadows a racist.

TLAIB: Just to make a note, Mr. Chairman. Just because someone has a person a color, a black person, working for them does not mean they aren’t racist. And it is insensitive that some would even say it’s — the fact that someone would actually use a prop, a black woman in this chamber, in this committee, is alone racist in itself. 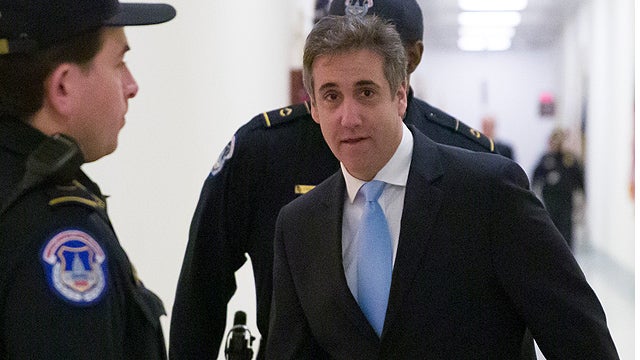 RUSH: Well, this is who these people are. These people just — I don’t know, folks. I’ve run out of polite ways to describe them. This woman is obviously running around enraged. She is steeped in identity politics. And so Mark Meadows, by having an African-American associate, he’s using her as a prop. See, Democrats never used African-Americans as props, do they? Oh, no. The Democrats never use minorities as props. They use everybody as props. That’s where she gets the idea. They always accuse us of doing what they do! Well, Mark Meadows is a good friend of the chairman of the committee, Elijah Cummings of the Congressional Black Caucasians, and he wasn’t having any of it.

MEADOWS: Mr. Chairman, there’s nothing more personal to me than my relationship, my nieces and nephews are people of color. Not many people know that. You know that, Mr. Chairman. And to indicate that I asked someone who is a personal friend of the Trump family, who has worked for him, who knows this particular individual, that she’s coming in to be a prop, it’s racist to suggest that I asked her to come in for that reason.

RUSH: And this Tlaib woman, she doesn’t think there’s gonna be any pushback because she’s a leftist and she’s a woman and she can say this stuff. The liberals tell themselves this stuff all the time, and there’s never any pushback. Republicans just slime away and wallow and cower in the corner. They never push back. She didn’t know what to do with the pushback. And Cummings didn’t quite know what to do with this. Meadows is demanding that he intercede and vouch for him ’cause this cannot stand and here’s what the chairman then said.

CUMMINGS: Mr. Meadows, you know, and of all the people on this committee, I’ve said it and got in trouble for it, that you are one of my best friends. I know that shocks a lot of people. And I could see and feel your pain. I feel it. And so — and I don’t think Ms. Tlaib intended to cause you that, that kind of pain and that kind of frustration. Did you have a statement, Ms. Tlaib? We need to straighten this out.

TLAIB: Thank you, Mr. Chairman, and to my colleague, Mr. Reynolds, that was not my intention and I do apologize if —

RUSH: The hell it wasn’t!

She just didn’t expect there to be any pushback on it! She expected applause! She expected the gallery to stand up and applaud. She expected the media to make her a hero. It is outrageous that Meadows even had to do this! So after, “No, no, no, thank you, Mr. Chairman, my colleague, Mr. Meadows, that was not my intention, and I do apologize if that’s what it sounded like.” Here she is back on January 3rd, 2019, at an event hosted by MoveOn.org.

TLAIB: People love you and you win. And when your son looks at you and says, “Mama, look, you won. Bullies don’t win.” And I said, “Baby, they don’t,” because we’re going to go in there and we’re gonna impeach the motherf—-r.

RUSH: We’re gonna go, we’re gonna impeach the M — and, by the way, Pelosi is tamping that down but when she tamps it down, we don’t know if she means it.