RUSH: Now, I’ve made a big deal out of Cohen not alleging any crimes, and I don’t want to be misunderstood here. There are two kinds of jeopardy going on here. There’s political jeopardy which is what this is, and of course legal. What is happening here is that the Drive-By Media are getting to run headlines for almost a week claiming that Cohen was going to reveal Trump’s illegal activities while in the White House, and that’s what’s gonna stick in the public’s mind.

So you had the week-long setup. And of course yesterday they were orgasming over what was happening today with Cohen showing up, and they set it up by saying that Cohen is going to pull back the shades and is going to unload on Trump’s illegal activities. Well, he’s not unloading on any Trump illegal activities. But in terms of the news consuming public, he is, because that’s what they were told he was gonna do.

I’d venture to say that most people are not watching this. Trump has had such success in creating jobs that more Americans than ever before are working and they’re not watching this stuff wall-to-wall like we are here. So the Drive-Bys have created this impression that what Cohen’s saying today is revealing criminal activity or illegal activity, which is what the media and the Democrats are counting on. It’s how they establish all their narratives as historical fact.

An example of that would be this Charlottesville thing that all of a sudden has resurfaced now, and it is continually being misrepresented and misreported. But Michael Cohen, paragon of virtue, he has such impeccable morality, he went out and hired Lanny Davis as his lawyer and his fixer who, among other things, is the right-hand man of the woman who actually did collude with the Russians, Hillary Clinton. Lanny Davis is the lawyer for Michael Cohen. He’s the right-hand man of the woman who has lied repeatedly about her email server and her classified doc — and her health care program and anything else. 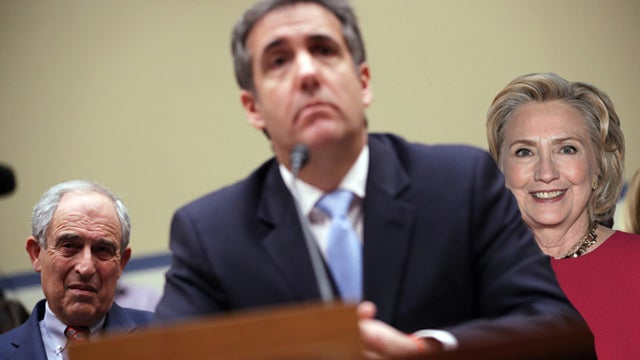 She has cheated on her taxes, a woman who has actually done all the things that Trump is being falsely accused of today! She has done them! She has colluded with Russia. She has colluded with Russian agents. She has been exonerated of criminal crimes. The collusion they’re talking about here, for example, between Trump and the National Enquirer pales in comparison to the ongoing collusion between the Democrat Party at large and the entirety of the American Media. And the only collusion they can nail Trump on is the National Enquirer? And what does it involve?

All of these allegations about Trump in the National Enquirer involve trying to make sure that embarrassing stories about yourself are not published. Hey. I got a hint for you. Everybody in the world tries to do that. If you get a heads-up that some negative story on you is coming, I guarantee you, if you have the ability and if you have the contacts you’ll do what you can to limit the damage. It’s what everybody does. The Democrats are the king of that as well.

One little brief example. It’s the 2004 presidential campaign, CBS News is interviewing John Kerry, who served in Vietnam. They asked him a question in the interview that he botched so badly, it was so embarrassing, I don’t know the specifics, that they gave him a do-over. The reporter for CBS said, “Sir, do you want to try that again? That really didn’t make much sense.” So they gave him a do-over. Had it been a Republican, they would have run it as it went to tape and as embarrassing as it was.

The idea that there is something suspicious about Donald Trump trying to limit bad news coverage and that this makes him a sinister guy? It makes him the epitome of normal. Everybody and their uncle who thinks they’re about to be smeared would like to be able to stop it. Look at how Ted Kennedy succeeded in the Mary Jo Kopechne business. Look at collusion between the Kennedy family and the media back then. And then the conversion of Ted Kennedy into most heroic, impeccable Democrat alive, the lion of the Senate.

So all of these things that Trump is accused of doing here by Cohen are not illegal. But again, they don’t have to be based upon much of the news-consuming public. But, on the other hand, we sometimes assume on our side that the Democrats never fail and that media never fails once they target somebody or something, that they always succeed. We never factor in — in fact, there’s a new poll out today that the media is now sitting at the bottom of the barrel in terms of industries the American people respect. And so we sit here with the idea that whatever happens here, everybody’s gonna believe it and Trump’s gonna be in big, big trouble. And yet that’s not true, either.

Now, I think it is so apparent — if you’re an average American, let’s try to look at this, lets you and I, let’s take ourselves out of the circumstances that we exist in every day. I’m immersed in this. I love it. It’s my job, man, it’s my hobby, it’s everything. You are too. You’re here every day. You listen a long time here every day. So you are among the select few in this country that are supremely informed. And, as such, your opinions that you have of all this are understandably informed. But most people don’t have the time. Most people don’t watch the news 24/7. Most people are really busy.

Now, wait. I’m leading up to a question I have for you. Most people — and I’m not saying you’re not busy, but you’ve made a decision, this stuff fascinates you, you’re here each and every day from — we know how long you listen. We’ve got the numbers. It’s incredible, by the way. There’s not a program out there that has longer time spent listening numbers than this one. At any rate, a lot of people, their day is hustle and bustle. It’s got many elements to it, getting up, getting ready for work, kids off to school, go to work, maybe two jobs, who knows what. And you catch a little news here and there.

You might stream a little on your phone. You might catch some in the car driving around. You get home, turn on some network, whatever you watch. But you don’t get a steady diet of it. And my question is, if that describes you for the past two years — and let’s throw in that you’re not, I want you to imagine that you’re not a committed ideologue. You’re not a committed liberal or conservative. You don’t get into any of that.

If you read newspapers, if you read the internet, if you read published news, same thing. The odds are you’re going to run into a never-ending diatribe against Donald Trump that is filled with never-ending criticism — some people might even think it hate. My question you to you is, if that profile, if you can imagine yourself in that profile or imagine others in it, how does this affect them?

Do they become persuaded that Trump is a reprobate? Do they become persuaded that Trump shouldn’t be president, that the media’s right, that Trump’s a reprobate and he’s a liar and he’s a cheat and this and that. Or do some of them say, “Is there nothing else you people can talk about?” How many of them are getting fatigue over the media being singularly focused on criticizing Donald Trump?

We’ve never had a sitting president the object of this much negative coverage. It’s been close. But no sitting president has ever had 92% negative coverage every day 24/7 for over two years. What do you think the perception of this by casual news consumers is? Are they persuaded by it? Or do they get suspicious of it? Or does it make them even more curious about Trump? “Man, this guy must be something.”

Now, I know most of you think instinctively that it’s gotta hurt. This never-ending repetition, criminal testimony, this or that, Trump colluding, stealing the election, it’s gotta have some impact, right? What is the real impact of this? Because I believe that they’re gonna overdo this, these congressional committees with their singular focus of trying to portray Trump as a reprobate criminal that has gotta be impeached.

Then we’re gonna have the presidential campaign on the Democrat side, which is gonna have 16 to 20 of these people trying to out-hate Trump and to out-extreme left-wing each other to the point that it’s gonna become self-destructive. I think they’re already down on that path.

After spending the last two years claiming Trump is a full-fledged criminal for not releasing his tax returns, Crazy Bernie won’t release his. Now, I think the Democrats are running a great risk of having this all backfire. It may be some wishful thinking in there, I will admit, but there’s also serious observation. We’ve never seen this kind of focus. On the surface it’s irrational to listen to these people in the media every day explain their hatred for Donald Trump, it’s completely irrational.

I realize there’s a lot of irrationality on the left. I’m not talking about committed leftists and committed Democrats. I’m talking about noncommitted, nonideological, occasional consumers of news and what your thoughts on how all this affects them.