RUSH: I want to provide a little variety here. So here is Mark Green. He is a Republican from Tennessee, a member of the committee, and he gave a great overview of this circus, essentially saying that Cohen is a fake witness. We have two sound bites. This is really good. Here’s number one… 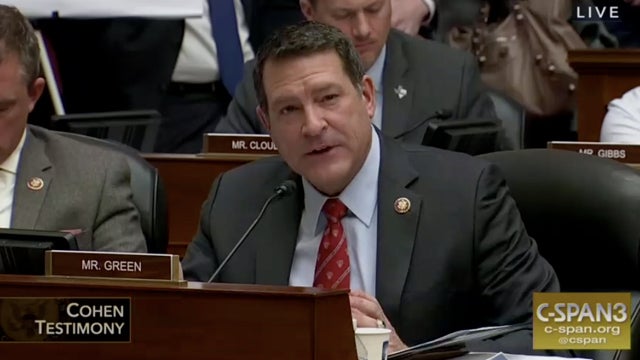 GREEN: The Democrats have vastly limited the scope of this hearing. They’ve issued a gag order to try to tell members of this committee what we can and cannot talk about. My colleagues on the other side of the aisle claim that they want the truth, that they want “transparency” and “fair oversight.” Yet the Democrats’ witness to testify before Congress today is none other than a scorned man who’s going to prison for lying to Congress.

Let that sink in: He’s going to prison for lying to Congress, and he’s the star witness to Congress. If you read the sentencing report on Mr. Cohen, words like “deceptive” and “greedy” are scattered throughout that report. It paints a picture of a narcissist, a bully who cannot tell the truth whether it’s about the president or about his own personal life. But today, he’s the majority party’s star witness. If the Democrats were after the truth, they’d have an honest person here testifying.

RUSH: They don’t have anybody else. That’s the point. This is it. This is all they’ve got: Lanny Davis and Hillary Clinton’s new client. That’s all they have. Here’s one more bite from Mark Green again. He is a Republican from Tennessee.

But didn’t Mr. Cohen on two occasions break campaign finance law with his own donations? So, again, the majority party’s star witness on the president’s compliance is a guy who broke compliance laws himself. Mr. Chairman, you graciously allow us to ask questions of Mr. Cohen of the president’s dealings with the IRS and tax law. Your star witness here broke the law with regards to the IRS at least five times. He pled guilty on cheating on his taxes, lying to the IRS. He’s the best witness you got?

RUSH: And they cut to Elijah Cummings’ face and he was scowling like you can’t believe. Jim Jordan, the ranking member — Republican, Ohio — attempted to get the hearings delayed today, claiming a rules violation. Apparently, everybody in the media was given Cohen’s 20-page opening statement early last night. The media had the head start on dealing with it as they wanted.

The Republicans on the committee were not formally presented Cohen’s opening statement until later last night. The rule is they have to get it 24 hours before the witness appears, and so the rules were violated by the Democrats and by the chairman. They attempted to delay the hearings while a ruling on the rule violation had taken place, but it was overruled, of course, by the chairman.