RUSH: (Southern accent) “Well, looky here! Governor Ralph Northam of Virginia has done canceled the first stop of his reconciliation tour because of some students objectin’ to his comin’ to their campus.”

RUSH: Now on to Ralph Northam, the governor of Virginia, who’s becoming increasingly harder and harder to find in the Drive-By Media. Yesterday, just to remind you, we had a story from former Vice President Algore who offered Governor Northam atonement. He offered him a way out of the controversy. Now, Governor Northam has said two things that got him in trouble. 1. That it’s okay to kill a baby after it’s been born if the mother wanted to abort it. That didn’t get much of a rise out of too many people.

But when pictures surfaced of Ralph Northam wearing blackface back in medical school in a yearbook?

That’s when people’s tolerance limit was reached. So Governor Northam has been planning a rehabilitation tour and a listening tour. He’s been going around the state to listen to what people think about blackface and what he can learn about the fact that it is wrong. And then out of the blue came Vice President Algore! “Former Vice President Al Gore said Democratic Virginia Gov. Ralph Northam can fulfill his ‘racial reconciliation’ pledge by opposing the Atlantic Coast pipeline, which he called a ‘racist rip-off.’

“‘This is an ideal opportunity for him to say, “I’ve seen the light,”‘ Gore said at an anti-pipeline town hall in a historically black part of Buckingham County, Virginia, as part of an ‘Environmental Justice Tour,'” Algore is on, by the way. All that he would have to do is to oppose — promise to oppose — the Atlantic Coast Pipeline, and Gore assured him everybody upset that he had appeared in blackface would immediately forgive him. Okay? 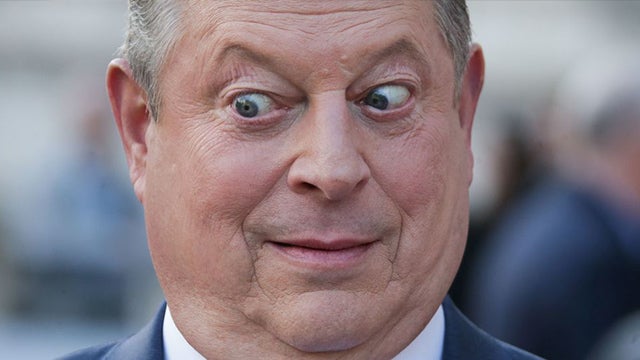 But wait! But wait!

(reading in a Southern accent) “Virginia Gov. Ralph Northam (D) canceled a visit to Virginia Union University, a historically black college, following protests from students. ‘While I appreciate @VAUnion1865’s invitation to attend tomorrow’s chapel service, I respect the wishes of the student body,’ he tweeted on Wednesday. ‘In lieu of my attendance, I will host the Richmond 34 at the Executive Mansion on Friday to honor their bravery and courage.'”

So a bunch of students told Governor Northam they didn’t want any part of him, didn’t want him showing up at the Virginia Union University, which is an all-black college — historically black college. The student population is 1% white, 1% Hispanic, 1% American Indian. The rest is black. The Richmond 34 that he’s gonna host at the executive mansion “were a group of VUU students who were arrested in 1960…” (laughing) They were arrested “while holding a sit-in demonstration at the segregated Thalhimers Department Store” in Richmond.

So this segregated university has a bunch of stars from 1960 who were arrested in a sit-in, and Governor Northam — as part of the reconciliation tour — is gonna host a reception. This would be like Barack Obama inviting Bill Ayers back to the Pentagon to relive the bombing as part of the reconciliation tour. “VUU Student Government President Jamon Phenix wrote a letter on Monday asking Northam not to come to an event on campus… ‘We are in support of honest conversation around race and reconciliation to move our great state forward,’ Phenix said…

“‘However, we feel as though your attendance takes away from the historical significance…'” The thing that’s happening here, see, is Northam’s supposed to be able to do all this under the cloak of darkness. The media is not supposed to be covering any of this. The schools are supposed to let him in there. He’s supposed to go on his reconciliation tour, but nobody is supposed to notice. He’s supposed to be invisible. That’s how he’s gonna survive this. So I don’t know… He’s gotta be wondering. You know, Algore promised absolution here simply by opposing the gas line project, and where is that?