Teachable Moment: Why Your Tax Refund Is Smaller

RUSH: I have three sound bites here from well-known media figures who are complaining that their income tax refunds are much smaller than they thought they were going to be. And they are really, really confused because they said that they heard Trump talking about how this tax cut was gonna mean all kinds of more money for more people.

Now, I don’t play these sound bites to embarrass these people, but they said what you’re gonna hear on national television. And I want to use what they’ve said as an opportunity, teachable moment. 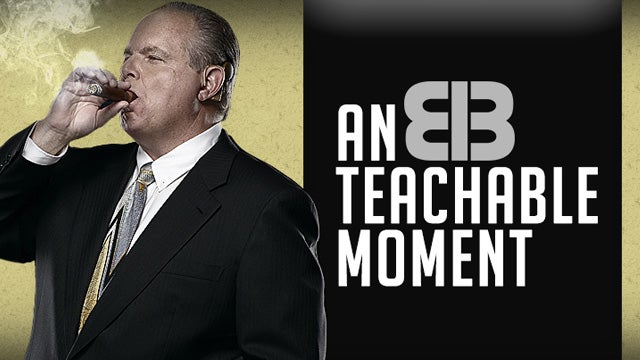 So we’re gonna start yesterday afternoon, CNN’s Newsroom. The infobabe is Brooke Baldwin. And she has as a guest a guy named Jim Tankersley. Jim Tankersley is the tax and economics correspondent for the New York Times. And she brought this guy in, a reporter, she brought this guy in to ask him why her refund is smaller than it has been in recent years.

BALDWIN: I went to my new CPA the other day and I was like, “Wait. What are you telling me? I can’t deduct X, Y, and Z anymore?” I mean, why will people’s refunds be so much smaller?

TANKERSLEY: Well, your refund is not necessarily an indication of how much of a tax cut you got. It’s an indication of how much money you gave the government during the year compared to how much you actually owe. So it looks like for some people, at least in the early returns so far, that’s meant they’re getting less back, which in some ways is good. It means you’re not giving the government a loan during the year —

TANKERSLEY: — on money that’s actually yours. In other ways, it’s very bad if you’re counting on that money and, oh, surprise, it’s not there.

RUSH: Now, her next question, she kind of betrays her confusion here. And the question, it’s kind of difficult to understand, but the guy goes ahead and answers it anyway. Now, I’m gonna explain what this is all about after the sound bite. Here we go.

BALDWIN: The whole tax overhaul was supposed to be the Republican Party and the president’s signature accomplishment. And how will the — the, you know, lower refunds impact what they wanted? 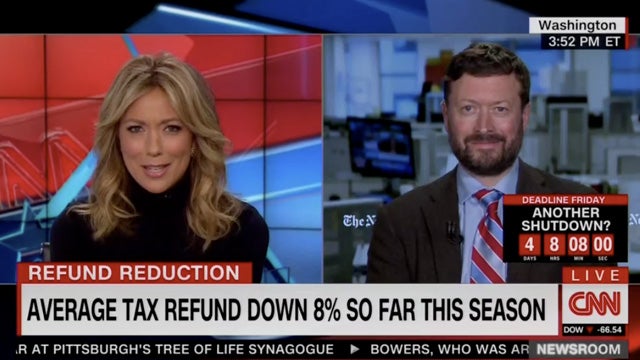 TANKERSLEY:  Well, so, there’s a couple of ways that you could look at it.  One is, people might be really angry because they have lower refunds than they were expecting or they have an unexpected tax bill, which is something that (stammering), at least anecdotally, we’re hearing that’s happening to some people.  On the other hand, their hope had been that people were seeing fatter paychecks throughout the year because they had less money withheld.  If it’s not a strong refund season, that’s, sort of, one more chance missed for Republicans for the popularity of the law, no matter what the economics of it are.

RUSH:  Okay.  Now, this second question was… As I say, it’s kind of hard to figure out what she’s asking, always I know.  “The whole tax overall supposed to be the Republican Party, the president’s signature accomplishment and how will, uh, you know, uh, the lower refunds impact, uh, you know, what they wanted?”  This… I’ve known people my whole life — and I’m sure you do, too — when they get their tax refund and they wave it around at you and they brag.

“Look at how much the government sent me! Look how much!” They want you to believe, not, “Look how much I was able to,” not cheat the government, but, “Look at the tricks I was able to use,” and those generally have not understood why their refund is large, and it all goes back to the W-4 when they sign up for employment. “How much do you want withheld from your paycheck every week based on your dependent status?” Most people have more than necessary withheld, A, to play it safe and B to get a big refund because the big refund is a sizable amount of money.

In many people’s cases, unless you get a refund of a $1,000 or $750 or more, most people never have that large an amount of money at one time.  So that’s how they get it.  They don’t realize that the only reason that they are getting that money is because they have had way too much deducted and the government has been able to use their money interest free all year in exchange for them getting that so-called big refund back.  Now, her refund is smaller than she thought, and it’s probably because of the deduction tables changing with tax reform.

But, more than that, she works and lives in New York — and, of course, she’s not allowed to deduct more than $10,000 of her state taxes under Trump tax reform.  This is what Andrew Cuomo and the rest of these clowns in California, New York, and Illinois are bent out of shape about. Because, if you live in a state with a top tax rate of 14% and you can deduct most of that from your federal return, then you’re essentially being subsidized.  It allowed those states to charge outlandish income tax rates.  Well, that all changed.

Now there’s a maximum $10,000 state, local tax deduction, which means nobody is subsidizing your state and local taxes.  You’ve now gotta pay ’em, and it will show up on your federal return, because you’ve gotta account for that in your deductions, and, if you don’t account for that in your deductions and you live in one of these states ,as she does, then her refund’s gonna be smaller.  She wants to blame it on Trump and lying about tax reform and how it was gonna give people much more than they had.

And it all adds up to the fact she just doesn’t — I’m assuming she doesn’t quite understand.  Although she said she’s got a CPA, and he would have had to explain it to her.  There’s one more here from Michael Strahan. This was Good Morning America this morning, and he’s got the chief business economics and technology correspondent for ABC News, Rebecca Jarvis, and they, too, are obsessed with their smaller tax refunds this year and they’re wondering what the heck is going on. 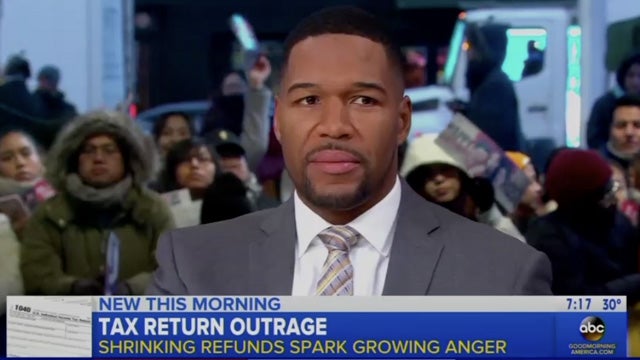 JARVIS:  So, basically, in those paychecks, people got a little bit more.  Think about it like this: If you got $40 extra in your paycheck each week, that would be about a thousand dollars more over the course of a year.

JARVIS Instead of seeing it in the refund check, you got it in the paycheck, but you might not have noticed it along the way.

STRAHAN:  You thought you were getting it there at the end of the year.

RUSH:  Okay.  So they’re trying to explain to people why their refunds are smaller.  That explanation actually made more sense than the other one.  But I have found over the years that people who like the large refund don’t fully understand why it’s large.  They don’t get the concept that they’re overpaying their taxes during the year.  And when you tell ’em, they’re fine with it, because they still like that gigantic lump sum every spring that they get in the form of a refund.  The perfect…

I mean, if you want to be fiscally responsible, if you have any discipline, the perfect tax refund is zero.  That means the government has not withheld a dime more than you owe, and that you have had control of all of your money the whole year rather than giving a whole bunch more than the government is gonna be owed. You’ve given it to them. You’ve let them use it and have it.  The point is, you haven’t used it. You haven’t had it to invest places that it might grow.

And this is a trick.  This is a trick of the whole tax code.  The government wants your money more than they want you to have it, and if they can trick you into chalking up a huge amount of deductions so that they withhold less and less, so you end up giving them a lot more of your money than you’re actually gonna owe them?

That’s a deal they will make every day of the year, and you couple that with the natural intimidation people have of the IRS — the fear of the IRS — and so they will deduct even more than they have to just to show that they’re willing to compromise and that they’re not trying to cheat anybody.  They’ve really got a smart deal going, the government does on all this.