Drive-Bys Shell-Shocked by Their Own Snap Polls

RUSH: Let me get this out of the way. Media reaction to this. There’s been all kinds of it. Let’s go to the stats first. CBS: 76% approve of the speech — all kinds of people — 59% CNN very positive view of the speech. This is the exact opposite what the media was setting the table for, the exact opposite what the left thought they were gonna get. They thought they got a guy last night that was gonna be putting his foot in his mouth and tripping over himself all night. They walked in there arrogant, condescending, so confident Trump was gonna blow it. And he ended up showing every one of them how it’s done.

Here is CBS special coverage of the State of the Union Address after the speech. CBS Eyeball News, Jeff Glor reporting a CBS poll… 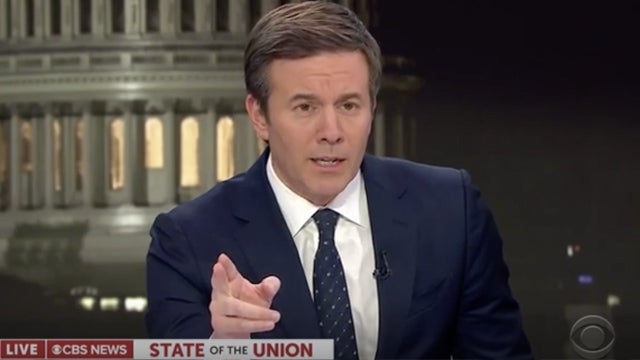 RUSH: (impression) Gulp, gulp. “That’s our poll? We are reporting this? That’s our poll?” And then of course they have to start discrediting their own polls, and you know how they do that. They say (impression), “Well, you gotta keep in mind here that these are instant polls. These are not scientific! These are immediately online after the fact polls before analysts have been able to tell the American people what the president actually said. Uh, you also keep in mind most of the audience is made up of the president’s supporters. Ehhh, people in the opposite party don’t really watch the State of the Union.” They start discrediting their own poll. Same thing happened at CNN. David Chalian’s their political director last night… 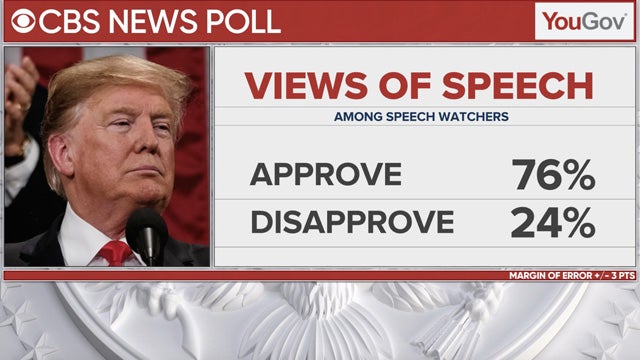 Here was his reaction…

CHALIAN: This is our first look at a brand-new instant poll, but it is among speech watchers. So I just want to stress here, for a State of the Union address, the president’s partisans, his supporters tend to turn out to watch the speech. This is true of a president of either party.

CHALIAN: So tonight, we saw a heavily Republican-skewed audience turn out to watch the president’s speech. But look at this! A very positive reaction from those who watched the speech tonight: 59% very positive, 17% somewhat positive, 23% negative!

RUSH: He has no idea who watched the speech when he’s making this report. They have no idea who watched it. He’s just employing the old conventional wisdom that they tell themselves when an enemy president does a good speech. “Well, yeah, but of course only the president’s supporters watch these things.” Of course, these same people thought that when Obama delivered a State of the Union, that the world was watching and that the world was enthralled and that everybody loved Obama — and any those who ended up disapproving were not worthy of comment or recognition.

So trust me, they’re beside themselves. Here one more bite from the CNN political director again. Again, his name is David Chalian.

CHALIAN: I want you to see that very positive number how that compares to Donald Trump’s performances in the last couple years when he’s given a speech to a joint session of Congress like this! You’ll see that he was, again, tonight at 59%. He was down to 48% very positive a year ago! Back when he first started the job and he addressed the Congress he was at 57%. So he’s back up. This is a… This is a speech watching audience that was more receptive this year than last year.

RUSH: (impression) “Uh, doesn’t really mean anything. Nothing meaningful here. The president’s fans watched this speech and is not that big a deal. That’s what they’re saying. But believe me, folks, they are shell-shocked. F. Chuck Todd over at NBC called it “theater of the absurd” even before the speech was given.

RUSH: Now, all of these numbers, ladies and gentlemen, that we are seeing, these approval numbers, 59% CNN; 72 to 79% on CBS, or 76% approving of the speech and approving of various elements and details of the speech, this is a double whammy for the left when you consider that the primary objective that everybody has had from the deep state and the Mueller investigation on to the elected Democrats, has been to drive Trump’s numbers down.

I don’t want to be too redundant about this, but I would be remiss if I didn’t connect these dots yet again. There is no crime in the Russia collusion story. There is nothing impeachable that Donald Trump has done. They will never come up with anything, and there certainly is nothing in the Russia collusion story. What it’s really always been about is forcing Trump out of office by way of having him abandoned by the people that voted for him and everybody else, drive his approval numbers down.

If they could get his numbers down to the thirties as they did George W. Bush — that happened late in his second term. They got Nixon’s down to the twenties. When that happens, the president loses all support in Congress. And at that point, that’s when the entire swamp feels emboldened to send an emissary to the White House, say, “Mr. President, if you don’t leave, you’re going to be impeached. It will be a permanent stain on your record. You’ve lost all support here among us, your fellow Republicans in the Senate or the House,” as the case may be. That’s been the objective. It’s been the objective, among many other things. I don’t mean to say that they really haven’t been trying to find a crime. There just isn’t one. 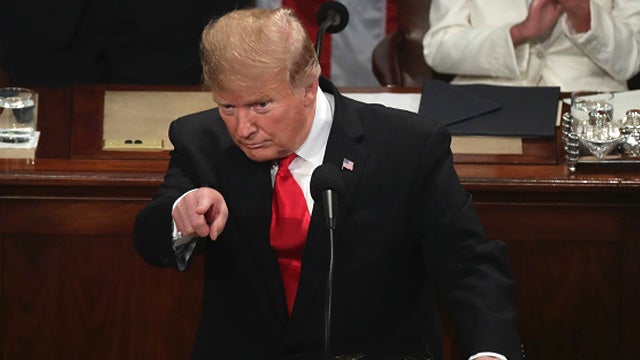 It has not taken a breath, this effort, after all of that, Donald Trump’s approval number remains at 48%, and the polling data after this speech last night — I heard Brit Hume say last night, “Well, you know, the State of the Union speeches, they never have any lasting consequences. People don’t generally remember State of the Union.”

I know why people say this, ’cause I sure as hell do. I remember some of them. I remember the good ones. I remember the bad ones. But I guess there just becomes conventional wisdom. But even Brit Hume said, “I think this one may be different. I think people may remember this one.” There’s no doubt people are gonna remember this. Donald Trump painted a picture of this country that was based in reality that is unlike the America reported on every day elsewhere in the Drive-By Media.