RUSH: There is an update on news out of Virginia. “Another top Virginia Democrat has admitted to wearing blackface decades ago. Attorney General Mark Herring issued a statement Wednesday saying he wore brown makeup and a wig in 1980 to look like a black rapper during a party as an undergraduate at the University of Virginia. The revelation further roils the top levels of Virginia government. Virginia Gov. Ralph Northam and Lt. Gov. Justin Fairfax…” 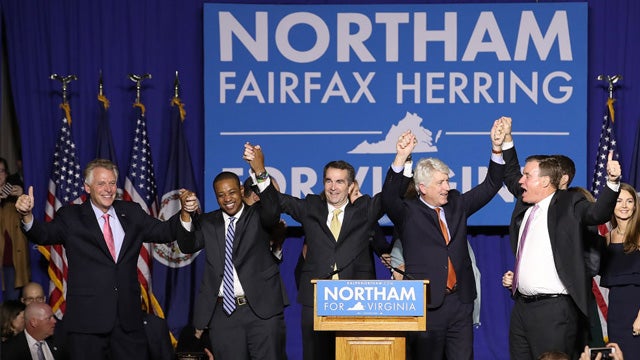 And, by the way, there is a report that this guy, Justin Fairfax, on Monday night, during a private conversation about the woman who has accused him, said, “F— that b—h.” That was overheard by the… You know, these Democrats, isn’t it amazing how many of them are absorbed with being blackface? They’re running around calling conservatives and Republicans racist every sentence they utter. Now you look at these people, they’re dressing up as Klansmen. They’re dressing up as minstrel show employees or workers and Vaudeville routines wearing blackface and to look like rappers.

And this guy has had to come out and admit it because it was going to be discovered. So he’s trying to get the dirty laundry out there in advance of it being discovered. I wonder how many Democrats are noticing it’s Democrats that are engaged in all of this. It all starts… (impression) If Ralph Northam just had shut up about killing babies, then none of rest of this had been discovered. But because Ralph Northam talked about making the baby “comfortable.”

When somebody who done went to school, well, then somebody who done went to school with Ralph Northam went back and found his yearbook and that photo of him in the blackface, and they put it out, and all of the rest of this. And that would have put Justin Fairfax in line. Somebody said, “Wait a minute. This guy sexually assaulted me way back in our higher education days.” He’s out there saying, “F— that b—h.” She’s saying “no,” and she went out, she’s hired Christine Blasey Ford’s legal team!

I wonder how many people are understanding that it’s Democrats who are being accused of this, Democrats who did this. You know, I’ve always lamented the fact that hypocrisy never seems to stick to these people, and that’s largely because the media does not try to make it stick. But man, oh, man. It’s not looking good for these people. And, meanwhile, Donald Trump just sailing along, Donald Trump is just kicking butt here. He’s performing magnificently. He’s got these people tied in knots upside down. They don’t know how to deal with this. The Drive-Bys are just outraged that Trump had the audacity last night to say we need to stop all these investigations. They had a close-up shot of Pencil Neck out there and he was beside himself.

RUSH: Michael in the Poconos, Pennsylvania. Great to have you. You’re next. Hello, sir.

CALLER: Rush, it’s a pleasure speaking with you, my friend.

RUSH: Great to have you here, sir.

CALLER: I believe that last night marked the beginning of the end of the Democratic Party. Their stand on illegal immigration, abortion, and socialism are gonna be their downfall. And also, I feel that if the chain of succession keeps going the way it is in Virginia, they’re gonna wind up with a janitor (laughing) running the state.

RUSH: Well, they’re gonna end up with a Republican before they get to the janitor. Nothing against janitors. We call ’em “custodial coordinators” here.

RUSH: You really think this is the beginning of the end of the Democrats as we know it?

CALLER: I believe that’s true. I look at the… Just look at them. You’ve mentioned several times: They’re not happy people. People connect with people who are happy, who are creative, who are just good people. And I didn’t see that there. You look at their faces; they’re just miserable.

RUSH: Yeah, true, but they haven’t been happy for a long time. They weren’t happy when Obama was in office for two successive terms. I mean, they were actually livid practically every day because there was resistance to Obama, and they hated that. But they’re perennially unhappy. They still win when they’re unhappy. Look, I’m not… I hope you’re right. We certainly would… I’d love to see that. I would love to see the eventual permanent decline that resulted in a majority of Americans actually rejecting what they stand for.

But that isn’t gonna happen until a majority of Americans know what that is, and, folks, I’m gonna tell you… This is not to depress you. Even talking about Ralph Northam, the governor of Virginia, most Americans don’t know why this whole thing started. They think this is still about a yearbook with a guy dressed up in blackface surrounded by a couple of people wearing Ku Klux Klan hoods. They don’t know that what started this was Ralph Northam saying (impression), “We gonna keep that infant comfo’ble befo’ we kill it.”

They don’t know that ’cause the media is not going there. Now, it’s not that it’s not getting out. I mean, conservative media, alternative media is pounding on it — and New York did have a standing ovation for the same abortion policy. That did make news in New York. I think it’s slowly creeping out.