RUSH: There’s a little news item floating around out there that I’m hankering here to address, but I’m wondering if there’s even a reason to do it. It may be a no-win. But the story is that there was this massive drug bust at one of our ports of call, Mexico somewhere, of fentanyl. Something like 254 pounds or whatever, fentanyl. That’s not the point. The point is the accompanying story. 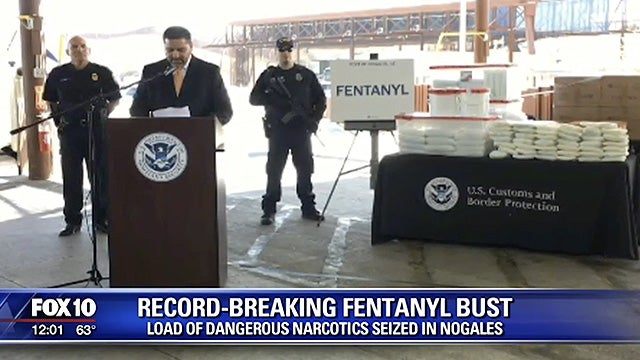 “This is enough fentanyl to kill thousands and thousands and thousands of Americans.” There are all kinds of fentanyl. The fentanyl that these guys are catching is more powerful than heroin. However, they’re using it, the drug cartels use it to use less heroin. They cut the heroin because it’s so much more powerful. When opioids kill you, they shut down your breathing. An opioid overdose shuts down your respiratory system. You’re in the middle of this euphoric feeling, and you stop breathing.

Now, the problem with it is is the way this stuff’s being portrayed on TV. If I’ve seen this once I’ve seen it twice. You’ll have a package of fentanyl in the bad guy’s lab and the cops will walk in there and somebody will slit open a bag of fentanyl and just the fentanyl dust that you can barely see wipes out 30 law enforcement people. It’s not possible! If that happened, they couldn’t put it in the heroin. They’d be killing every customer. And, believe me, they’re not out to kill every customer with one dose of whatever it is they’re selling.

Now, I don’t blame them for trying to hype consciousness about the stuff to try to get people to stay away from it. That’s all fine and dandy. There’s nothing good about it other than how it’s used medicinally. But fentanyl is used all the time in hospitals. It’s a synthetic opioid that has some properties that other opioids don’t have. When you start mixing drugs in the hospital, like surgical situations, you don’t want certain interactions to happen; so you can’t — talking about sedation or other needs that you have in, quote, unquote, knocking people out. Fentanyl presents a little bit more options to medical people if it’s licensed and commercially, legally produced.

But it’s not so powerful that a speck of sand amount of it if you breathe it is gonna kill you, the way it’s portrayed on TV. It’s just the way the stuff is hyped. Don’t misunderstand. This why there’s a no-win here. I’m not promoting – (interruption) What? Well, it’s horrible, it’s bad stuff! They’re using it to cut the heroin. But it doesn’t kill you. Well, it does. I mean, you can OD on anything.

But the point is it’s cut with heroin so they don’t have to use as much heroin. They can cheat the customer by cutting it with fentanyl, which means they’re able to make more profit on the sale. But this is more all a media thing, I guess. I hate when media lies about things and portrays it the way it is on crime shows, it just doesn’t quite get there.

RUSH: Now, one other thing about fentanyl to make my point. Do you remember, I forget how many years ago, maybe 15 years ago, could be even longer, the Russians were having great problems with the Chechens. The Chechens had invaded a church in Moscow, and they had taken hostage a bunch of people in the church. And the Kremlin was trying to figure out what to do about this. And you know what they did? This just shocked the defense department.

But they had weaponized it and found a way to make it invisible and put it in the ventilation system. Nobody knew that they were breathing it. And they had a significant concentration of the stuff, and people just started falling asleep. And when that happened and the Russians made their move — and they got as many of the innocent people out of there as they could and they left the Chechens to die. And then the United States, the defense department’s running around shocked as they can be because they can’t believe anybody found a way to weaponize the stuff and turn it into essentially a gas.