Callers Have Their Say on the Shutdown

RUSH: It’s Christmas Eve — I want to find out what’s on your minds, chat with you. We’ll do that starting in Jacksonville, Florida, with Mike. You’re first. It’s great to have you, sir. Hi.

CALLER: Hey. How you doing, Rush? I want to wish you and your wife a Merry Christmas and the best of 2019.

RUSH: Thank you. Same to you, sir.

CALLER: Thank you. I called because I know how to solve the shutdown problem and this immigration they’ve got. They talk about the spirit of partisanship on both sides, so each side has to give up something. And what I suggest is President Trump and Republicans come to Pelosi and Schumer and say, “We can work together, okay? We’re gonna take your $1.6 billion for your border security. And even though I tried, I’m letting my base know I tried to stop this shutdown, we’ll take the 1.6 bill, okay? That’s what we’re gonna accept.” But the Democrats, what they’re gonna have to accept, which you know as well as I do they won’t, but they will be exposed when they vote against it by “no.” What the Democrats will give up is, we’re gonna put a processing center on Mexico’s side. And as these people come in we’ll process ’em and vet ’em, make sure they’re not criminals, we’ll check ’em for diseases, whatnot. And the children and the parents, they can —

RUSH: Wait, wait, wait, wait, wait. Hold it a minute. Hold it. Are you suggesting that we propose an immigration processing center on the Mexican side of the border and that’s where everybody would be run through? Is that your idea to —

RUSH: — make them agree to that in exchange for taking the $1.7 billion? 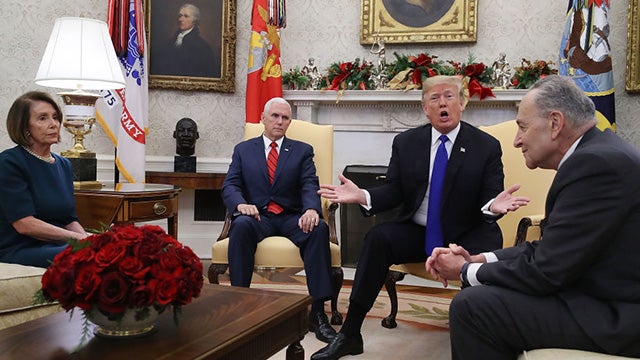 RUSH: Okay, let me just stop you. The Democrats are not gonna go for that. In fact, right now I don’t think the Democrats are even offering $1.6 billion. It may be theoretically there because it used to exist, but a processing center in Mexico would require the cooperation of the Mexican government. But none of what you’re doing is going to lead to what Trump’s objective is, which is border security.

Your way still admits people into the country but doesn’t give them any benefits, no health care, no Medicaid, no this. And they’re put in the back of the list, but they’re still here. And that means the Democrats can still reach them. You’re oriented on both sides giving something up to make a deal, which is how negotiations usually happen, but we’re way beyond that on this. Although there will be a solution. It will end.

There is gonna be an end, and that’s what we all have to be prepared for. But if your deal allows people who somehow survive a processing center to get into the country, and that takes them from illegal to legal, I don’t know how that’s solving anything per se. Then you’ve gotta involve the Mexican government to go along with the processing center and then you’ve gotta deal with the federal court system which anything like that that happens that the courts and the left thinks the Democrats didn’t get a good deal on they’ll try to stop, which is part and parcel of getting anything done. But I appreciate the call. Always do.

RUSH: This is Obi in Sanger, California. Great to have you, Obi. Hi.

CALLER: Dr. Rush, thank you so much for working today.

CALLER: Well, you don’t know how happy it made me. I thought I was gonna have a guest host this morning. I do love your guest hosts, but it’s always good to have the real thing. Anyway, some quick comments for you. First on the stock market drop, and then I want to do a little follow-up quick one on the wall and on that $150 billion. On the stock market, all the news people and the pundits, even the Fox people refer to it as being caused by, you know, this big drop we’ve had in the last few months by maybe interest rate fears or trade issues and other things.

The one observation none of them seem to make is that it’s coincided with the Democrats taking the House. And to me clearly that is because both the public and industry realize that the Democrats are gonna do nothing but frustrate Trump economic plans, and that’s why they are losing confidence in the stock market right now. So that’s my first comment. Do you want to respond to that before I make a quick one?

RUSH: No, go ahead because I’ve only got 45 seconds. I don’t want to take it away from you.

CALLER: Quick one on the wall. About eight months ago I sent a letter to the president and to Don Jr. saying that he should use the Army Corps of Engineers and Pentagon money and he responded to that. I mean, he came out shortly thereafter and said that’s something he’s thinking about doing. And I hope he does do it. He should do that. Finally, on the 150, that was frozen assets after the embassy fall, the United States froze $150 billion of Iranian assets.

RUSH: When was that?

CALLER: After the embassy fall back under the Carter administration.

RUSH: Oh, no, no, no. I’m not thinking 150 bill back that far. It’s part of this current deal. I’m gonna track it down. As far as the market plunge, it is clear the president, with all of his tweeting, is trying to focus all of this on the Federal Reserve and their raising rates and their promise to keep raising rates in 2019. I think there are structural reasons that this is happening as well.

RUSH: I think where I’m getting this $150 billion figure running around my head is that I think Obama lifted sanctions on frozen assets in Iran and since 1973 there were like $150 billion — the caller may have had a point — $150 billion of frozen assets that Obama then made available to them as part of the deal. I think that’s what it was.