The Mueller Probe Is a Political Prosecution

Now, the first thing about this, of course, is this interim attorney general appointment that the Democrats and the media are demanding this guy get recused. Let’s be honest. Anybody who might end up supporting Trump in this whole thing must be recused. That’s the criteria. Anybody who might be inclined to support Trump’s side of this whole Mueller investigation should recuse. Anybody who is committed to finding Trump guilty, to helping Mueller find Trump guilty, why, those are the people that should be in power.

Rosenstein. How ridiculous is it that Rosenstein — this is what the Maryland Democratic office party and attorney general went to court to try to insist that the federal court appoint Rosenstein as acting attorney general. Rosenstein is already questionable because of his involvement in the FISA applications and the fact that he wrote the letter recommending that Comey be fired! That Trump is being held up for as obstruction of justice! It was Rosenstein that wrote that letter that recommended Comey be fired. 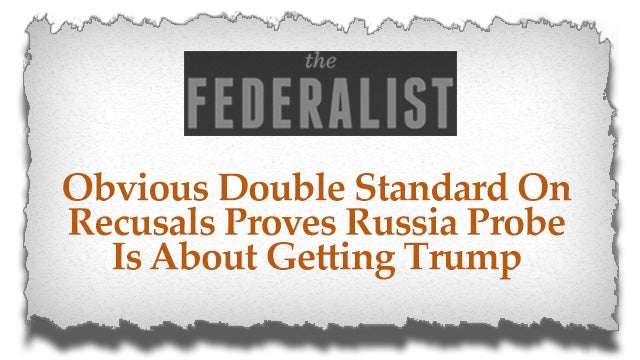 So this double standard on recusals is all the evidence you need that this Mueller investigation is about one thing. And it’s about getting Trump. There’s a great piece on it today at The Federalist by Adam Mill. He’s a citizen. He’s a lawyer and he’s a commentator, and he’s written this op-ed piece at The Federalist. “Don’t bother reading the underlying rules on conflict of interest, because there’s only one test that matters: Would the recusal help get Trump?

“The installation of Matthew Whitaker as the acting attorney general has the recusal pundits barking like shelter dogs in the presence of a trespassing squirrel. In case you’re wondering how the recusal rules work, it’s simply a matter of whether it helps or hurts Trump.

“Don’t believe me? See if you can detect a pattern. Since Whitaker might reign in the special counsel, he must be recused, they argue. Similarly, when it appeared former attorney general Jeff Sessions might help Trump, he acceded to demands he recuse himself. But Deputy Attorney General Rod Rosenstein is a proven thorn in the president’s side with an obvious conflict of interest, so no demands for recusal there.”

In fact, there are demands that he become acting AG. Well, he’s already corrupted. He’s already conflicted. And he’s much more than a thorn in Trump’s side. There’s a judge in this case, Rudy Contreras, and he is very friendly with Strzok Smirk and the lawyer, Lisa Page. He was very friendly at the time he was reviewing the FISA warrant applications from Strzok. Nobody required him to recuse. I mean, how in the world can the judge in the FISA court be best friends with the two lawyers submitting a FISA application not recuse on the basis of conflict? But there was no call for him to recuse.

“But the Trump appointee with authority to consider a search warrant of Trump’s lawyer’s private office was recused, leading to the raid to look for evidence that likely could have been obtained by subpoena. The recusal pundits called for the recusal of newly confirmed Supreme Court Justice Brett Kavanaugh because he might side with the president in future cases.

“Yet when Justice Ruth Bader Ginsburg calls Trump a ‘faker’ and openly expresses dismay at the prospect of his presidency, she need not recuse. Don’t bother reading the underlying rules on conflict of interest, because there’s only one test that matters: Would the recusal help get Trump?”

Which then leads to the next obvious conclusion, which we have already arrived at, that this is obviously a partisan witch hunt. And it’s become obvious to me that Mueller has withheld any report or any serious leaking until after the Democrats won the House. That’s what everybody was waiting on. And hoping the Democrats would win the House because that’s gonna facilitate things in a whole lot of ways. 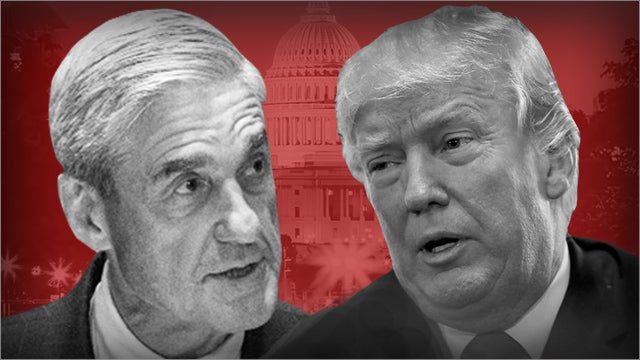 “Forcing Whitaker to recuse himself from the Robert Mueller probe would ‘protect’ it by restoring oversight responsibility to Rosenstein.” They desperately want Rosenstein there as the safeguard, as the guardian angel, the protectorate for Mueller. And the strange thing is this seems to be bipartisan.

“Republicans have joined the Democrats and the media to knowingly caution against the imprudence of stopping the Mueller ‘investigation.’ But before we start contemplating tortured recusal arguments, it’s worth asking, ‘What is Mueller is supposed doing, anyway?’” And why the hell are Republicans supporting it?

Why the hell is Jeff Flake in there demanding that there be special legislation in the Senate to protect Mueller from being fired before he will participate in votes that confirmed Trump judicial nominees? Why are so many Republicans siding with Mueller? Well, the answer boils down to what the answer to last hour was. Hatred for Trump.

You know, you can talk all you want about the shenanigans that Democrats are engaging in in Georgia and here in Palm Beach County and down in Broward County, and they are, and it’s dangerous, and it’s threatening, and it has very vast and bad potential, but I’m telling you, folks, the Republican Party is being divided and serious supposed influential members of the Republican Party still aligned against Trump thinking that Mueller’s got the ideas.

And for a lot of ’em it traces back to one thing: What Trump said about McCain. That’s the foundation, and then it builds from there to Trump is a bully, we don’t like Trump’s tweets, we don’t like his personality.

I think American men gradually, kind of like frogs in a gradually heating pot of water, I think a lot of American men have been wussified ever so slowly over the course of many years. Wussify, I call it chickification of America. It’s been happening steadily. It’s an offshoot of feminism. And it relies on the fact that men like women and it relies on the fact that men want to be with women, date women, they want to have fun with women, they want to marry women at times. And so the laws of nature are that men will do what’s necessary to be with women.

Gotta go to museums, read magazines on where you’re supposed to be to meet women and go there. Men will do it. And if you gotta be wussified and if you’ve gotta somehow support some tenet of feminism here or there, you’ll do it. A lot of men do. And I think over the course of years there’s been a wussification of manliness. “Are you telling me that Trump’s tweets and Trump’s bullying, you think that’s what being a man is?”

Too many people are running around uncertain, not confident, needing affirmation, afraid to be who they are. And when somebody comes along who doesn’t have those fears, is who he is, says what he says, means what he says, backs it up, that then becomes offensive to our sensibilities and threatening at the same time. And that is what is meant by these Never Trumpers and people on the Republican side feeling threatened by Trump’s style or offended by Trump.

They’re afraid that if they agree with Trump on issues, that they, then, are gonna be thought of the same way Trump is, as some bully, loudmouth, uncouth, rude bull in a china shop. And they want to be thought of as reserved and polite, refined, sophisticated, sharp creases in their slacks and so forth. And they can’t be considered that way if they agree with Trump on issues.

So they’re kowtowing! They’re kowtowing and capitulating to conventional wisdom to the mob demanding this or that. That’s what’s really going on here. It can’t be issue related. None of these people disagree with Trump on issues: tax cuts, economic growth, being strong with nuclear enemies. They can’t object to any of that.

The problem they’ve got with that is that they have been advocating for these things all these years and were unable to advance them or implement them. And Trump has come along and proven they’re not necessary to get this stuff done. So they’re doubly angry.

Then you pile on what he said about McCain during the campaign and so forth, and that’s the root of all this. And while that division is taking place, the Democrats are parlaying whatever efforts they’re engaging in in Georgia and here in south Florida.

Everybody involved — Republicans and Democrats — are saying it’s so important to get rid of this guy. We cannot allow outsiders to win like this. We cannot allow somebody that doesn’t know what they’re doing come in and trample everything that we’ve been building since the end of World War II. We’ll fix whatever we break after we get rid of Trump, except they won’t, because precedents get set.

But it’s not gonna be gotten rid of. It’s a weapon. It’s a brand-new weapon in politics to vanquish an enemy that you can’t beat at the ballot box. It’s not gonna go away. That’s what’s so dastardly wrong about all of this.

And these people, Jeff Flake and these clowns standing up saying they’re protecting the rule of law. They’re disintegrating it. They are obliterating the rule of law. It simply doesn’t exist! There wasn’t any Russian collusion! And yet every day in the media it’s still referred to as something that literally happened! Outrageous!