THE PRESIDENT: Honestly, I think you should let me run the country, you run CNN, and if you did it well, your ratings would be much better.

ACOSTA: If I may ask one other question.

ACOSTA: Mr. President, if I may ask one —

THE PRESIDENT: You can go ahead.

ACOSTA: — other question. Are you worried —

ACOSTA: — ask one of the other folks — 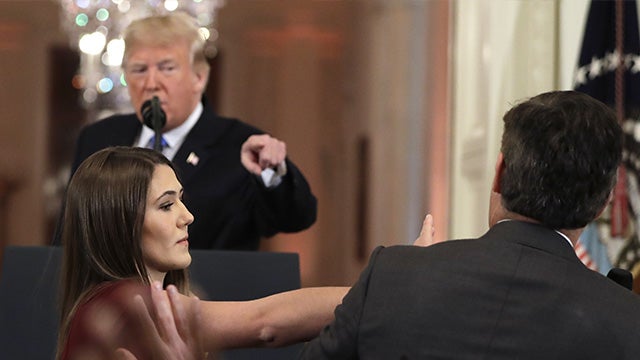 THE PRESIDENT: Excuse me, that’s enough.

ACOSTA: Mr. President, I have one other question, if I may ask, on the Russia investigation. Are you concerned that you may have —

THE PRESIDENT: I’m not concerned about anything with the Russian investigation because it’s a hoax.

ACOSTA: With the indictments coming —

THE PRESIDENT: That’s enough. Put down the mic.

THE PRESIDENT: I tell you what. CNN should be ashamed of itself having you working for them. You are a rude, terrible person. You shouldn’t be working for CNN. Go ahead.

THE PRESIDENT: You’re a very rude person. The way you treat Sarah Huckabee is horrible and the way you treat other people are horrible. You shouldn’t treat people that way.

RUSH: That’s President Trump. That was about the last part that we didn’t hit: the 30% that began when he started the questioning about the caravan, and it’s an invasion. And Trump answered. Then they got into whether or not actors were being employed to participate in these caravans and so forth.

And this is there for everybody to see. It’s nothing new. It’s the way the press has been dealing with Trump.

RUSH: There was another set of fireworks after Jim Acosta behaved as the childish, rude person he is.

April Ryan of something called the American Urban Radio Networks decided to start asking questions when she had not been given the microphone, when she had not been called on. This is another radical leftist political hack that’s working as a journalist. This is runs a little bit less than a minute and here it is.

REPORTER: If it’s unfair to the country and it’s costing millions of dollars, why don’t you just — 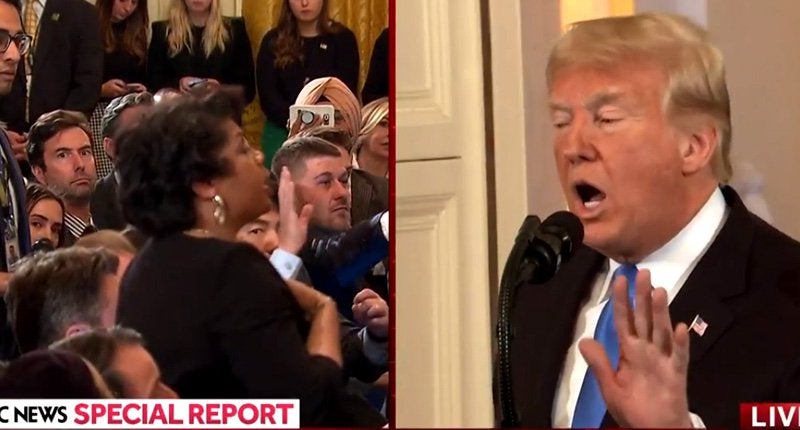 THE PRESIDENT: Give him the mic, please. I’ve answered the question. Go ahead and take the —

THE PRESIDENT: Excuse me. I’m not responding to you. I’m talking to this gentleman. Will you please sit down?

THE PRESIDENT: Excuse me.

THE PRESIDENT: Excuse me. Would you please sit down? Please, go ahead.

REPORTER: Thank you, Mr. President. Now that the House of Representatives —

THE PRESIDENT: Very hostile. It’s such a hostile media. It’s so sad. You ask me about —

RUSH: The point is, that’s April Ryan, and she doesn’t have the microphone. When it’s a journalist’s turn, they have an aide in there passing a microphone around so everybody can hear the question. She was not given the microphone. She just started shouting questions out, “What do you mean voter suppression?” And Trump’s point about voter suppression is that negative polls — for example, was it a Reuters poll? There was a Reuters poll yesterday that had both Gillum and Bill Nelson up by seven! On Election Day! Well, they end up both losing! But a poll has ’em up plus seven. That’s what Trump is calling voter suppression.

When CNN runs all of these crazy polls showing the Democrats running away with everything, that’s voter suppression because it tends to make Republicans think there’s no reason to vote! It’s over, it’s hopeless! ‘Cause people believe this garbage!