RUSH: I’m gonna take you back to Monday night on CNN. Don Lemon, he of the black hole, thinking maybe a missing airliner had flown through it. Don Lemon may be one of the most mentally challenged people on television. He was talking to Fredo Cuomo, who’s on that list as well, and they were talking about recent shootings and mailed pipe bombs. Fredo said to Lemon, “There was another hate-filled criminal just last week Kentucky, another white guy in custody for shooting and killing two African-Americans at a grocery store. And we barely had time to cover it.”

LEMON: We have to stop demonizing people and realize the biggest terror threat in this country is white men, most of them radicalized to the right, and we have to start doing something about them. There is no travel ban on them. You know, they have the Muslim ban. There is no white guy ban.

RUSH: Well, there you have it, my friends. There’s Don Lemon: We need a white guy ban to go along with the travel ban and the Muslim ban, because “the biggest terror threat in this country right now is white men.” This, of course, ignores all of the people of color — protest marches, Antifa — who inflict damage and harm on people. Of course, the Black Lives Matter group. But you see what’s interesting about this or noteworthy about it is this is what is really thought of. Don Lemon’s not alone here. He just happened to be the guy that said it.

But that happens to be the driving impetus behind much of extreme liberalism. That certainly… That is what’s driving militant feminism, angry women. They think white men are the problem. White Christian men are the problem in virtually every instance, and it dates back to the founding of America. This is the organizing energy force behind much of radical liberalism today, that white men are the problem, from the establishment of the American government as a capitalistic economy to the United States in general, to setting themselves up as the majority, and they now wreak havoc, and they get unfair benefits and so forth and so on.

It’s why this stuff is all crucial.

RUSH: Okay. Listen to it again. This is Monday night on CNN. It’s taken a couple of days for this to reach the mainstream. Don Lemon says it on Monday night on CNN, and it’s noticed today. Again, he’s talking to Fredo Cuomo about all the recent shootings and mailed pipe bombs. Fredo says, “There was another hate-filled criminal just last week in Kentucky! Another white man in custody for shooting and killing two African-Americans in a grocery store. We barely had time to cover it.”

LEMON: We have to stop demonizing people and realize the biggest terror threat in this country is white men, most of them radicalized to the right, and we have to start doing something about them. There is no travel ban on them. You know, they have the Muslim ban. There is no white guy ban. 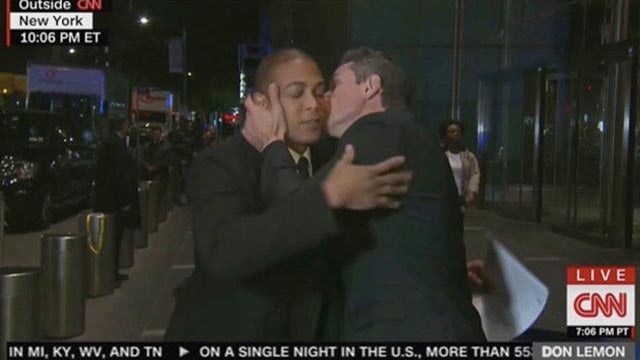 RUSH: Now, Don Lemon… Well, what is your reaction to this? I mean, folks, I’m telling you, this is not a one-off. This is… I mean, the specifics of a white guy ban — and that may be something that he individually holds. But the idea that the opposition, as far as the left is concerned, is white men — predominantly white Christian men? That’s dead on the money. That’s right exactly where they’re aimed. In the perverted view of the American left, it is white men who created this racist and bigoted, unfair, unjust, immoral country.

Do not consider me to be exaggerating here. That is what we are up against. From the Alinsky days all the way up through the Obama administration, the real objective has been to transform America away from the traditions and institutions of the founding based on the fact that it’s all racist and it’s all bigoted and it’s all unjust and unfair. They continue to point to slavery as the primary evidence, the primary example or exhibit of their claim that America’s unjust or unfair. They, of course, pay no attention to the steps America took to end racism.

That gets no credit, gets no mention whatsoever.

As far as they’re concerned, racism and slavery still exist in prisons, on the caravan, in immigration policy, you name it. So this is what’s animating them. This is certainly what has energized and filled women all over this country with rage. Leftist women. It’s being utilized to great effect. But that’s the single organizing purpose. It is racial or… I was gonna say “racist,” but it’s racial in its origins. Now, it covers much more ground than that in terms of its objective. But that’s their target.

That’s what they’re using — and have been for a while — to energize everybody who is not a white man. They’re using victimology and victimhood to a T. They are making people think that they have no chance in America as long as white men continue to run it and white men continue to be the majority, and they just continually enrage people. They ratchet up the anger. There has to be an outlet for it. I think they are… If you want to start attaching media responsibility to the actions of people, notice how quickly they want to do that.

Notice how quickly on the left that people who commit crimes are not really responsible for them. They’re always the result of environmental things. So it’s the left telling us that these guys are being motivated by Trump. They either love Trump or they hate Trump, but whatever. Trump is making them do these things. I think it’s them. If we’re gonna go down that road and if we’re gonna start attaching blame to people who don’t really have any responsibility for making the bombs or pulling the trigger on the guns, who is it that’s enraging them?

Like I say, you cannot turn on the news today and find a single thing positive about anything! You cannot find any reinforcement anywhere in public media for the goodness and decency of America. It’s quite the exact opposite, and since these people are the vast majority of media… You know, they exempt themselves from having any role in all of this while they are eager to try to find anybody else in media who might be to blame for this. Don Lemon said, Monday night also, that he doesn’t see Democrats killing people over politics.

You mean, Don, like the followers of Black Lives Matter?

There aren’t any Republicans in that group.

Look at the number of police officers who have been murdered, Mr. Lemon, by Black Lives Matter supporters. Look at how many of those cops’ murders have been defended and explained away by people like you in the sense, “Well, they’re cops! They mistreat, they’re racist, and they deserve it.” But don’t try to tell me that Democrats aren’t killing people. How about the guy that shot up the Republican baseball practice? You think he was just intending to wound people? Steve Scalise almost did die!

It’s amazing these people the way they talk and the things they conveniently forget — or don’t even register, maybe, in the first place. Five cops in Dallas, 2016. Are the Muslim in this country who have committed murder, are they Republicans? Nope. Many of them are very loyal Democrat voting blocs. Muslim-Americans, in fact, may be an even more reliable Democrat vote than black voters. “According to Forbes magazine, of the 3,342 the people killed by terrorists in the U.S. between 1992 and 2017, Islamist terrorists are responsible for 92% of those murders.”

It is a bunch of deranged people who are out of their minds, and I’m telling you, it can happen to among the most feeble, if there’s just a steady diet of the negative upon negative drumbeat on television today that is described as news. It is not news. It is the Democrat Party agenda. But it is not news. It hasn’t been news for quite a while.