The New York Times Takes Us to the “Vagina Ghetto”

RUSH: So we are at a stage where there is another allegation. There is no evidence. There’s no corroboration of evidence. There is… In fact, the Christine Blasey Ford legal team refuses to send over the lie detector results or the notes that the therapist took in her meeting in 2012 — and get this. This is from the Washington… (interruption)

Yeah, yeah, yeah, Snerdley. Be patient. I’m gonna get to the “vagina ghetto” here in just a second. The Washington Post, Jessica Contrera and Ian Shapira: “Christine Blasey Ford’s Family Has Been Nearly Silent Amid Outpouring of Support — The letters appeared within days of Christine Blasey Ford’s name becoming public. One was from her high school classmates. One was from her colleagues at Stanford University.

“Her Palo Alto neighbors wrote another letter. Groups of attorneys, statisticians and teenagers wrote too. Then came a letter that began, ‘As members of Christine Blasey Ford’s family …’ It was signed by a dozen people. But none of them were related to Ford by blood. The letter was from the relatives of her husband, Russell Ford. Christine’s own parents and siblings — the Blaseys — have not released any similar statement of support.

“As their daughter and sister has become the country’s most talked-about woman for accusing … Kavanaugh of sexual assault while both were in high school, the Blaseys have strategically avoided the press. Voicemails, texts, emails and letters from reporters have gone unanswered. Friends of the family have politely declined to comment on what they are going through. … The Blasey family’s reticence is notable amid the outpouring of support for Ford as the 51-year-old research psychologist from California prepares to testify Thursday…”

So her family and her siblings know her better than anybody else, and from that we can conclude — and then we can have it corroborated — that her family’s reticent, uneasy, nervous about becoming signatories to the, “I know it happened and I know it happened to her,” letter. Okay, Lara Bazelon (I don’t know how to pronounce this), op-ed writer, New York Times: “Man Up, Grassley. Question Blasey Ford Yourself.” This is the convoluted aspect this. 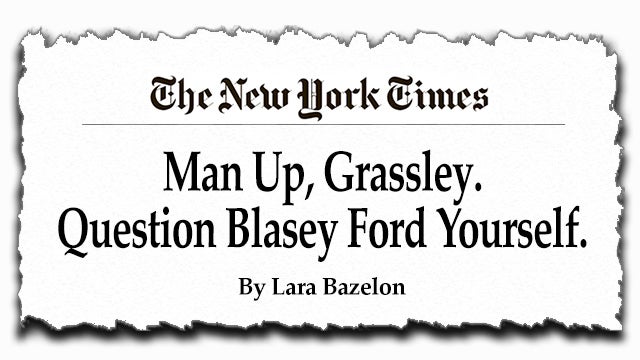 When this first came up, when the hearing was first discussed, the left immediately said, “You old white guys, you old white Republicans, you can’t question her. She’ll be nervous enough. You can’t! We’re not gonna let happen to her what happened to Anita Hill. You can’t question her!” So Grassley said, “Okay. We are going to be fair.” So Grassley goes out and hires a female prosecutor with experience in sexual abuse and sex crime cases.

And now comes this woman, Lara Bazelon, saying (paraphrased exchange), “Well, you can’t do that! You can’t bring in a woman to answer these questions from outside the Senate. You need to have senators do it!” Grassley’s scratching his head, saying, “Wait a minute. You said and you said and…” So this woman writes, “Dr. Blasey and her lawyers have pushed back, demanding that Mr. Grassley and his colleagues question her themselves. They are right to do so. The Republicans’ attempt to outsource the questioning of Dr. Blasey is cynical, sexist and cowardly. … 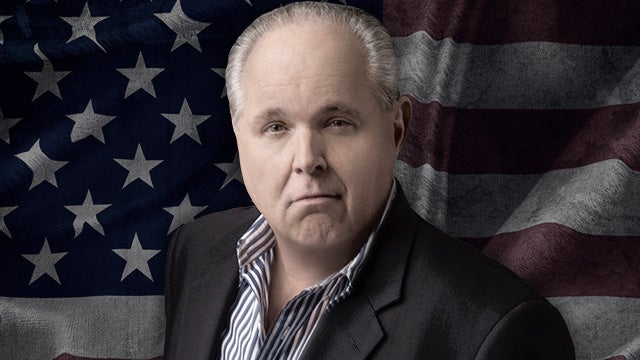 “They don’t want to be seen grilling Dr. Blasey in front of tens of millions of Americans. We’ve watched that horror movie before, during the Hill-Thomas hearings in 1991, presided over by the Democrats. No one seems anxious for a sequel.” This is like the written word of this Lara Bazelon babe. “But the solution isn’t to remove men from the script. It’s to ask that” these men, these old white guy Republicans, “embody different characters: people who can pose respectful, probing questions, rather than bullies intent on shaming and demeaning the witness.”

We reserve that right to do that to Kavanaugh. The Democrats on the committee will shame and demean and bully Kavanaugh. But you can’t shame and demean and bully Blasey! We’re not gonna permit it. “Whether it was female prosecutors clustered in rape and child-abuse units or suddenly becoming very in demand when it came to time to cross-examine plaintiffs … the consensus was that ‘it takes a woman to know a woman.’ Again and again, women are told that these are their only real opportunities in courtrooms — and now, apparently, Senate hearings.”

By this, this woman writes about the unfairness of women litigators, women lawyers in court. That’s her expertise, her level of expertise. She writes about the abuse and the unfairness and the impossible mountain to climb that women lawyers have. “Again and again, women are told that these are their only real opportunities in courtrooms — and now, apparently, Senate hearings.

“What looks like an invitation for advancement may actually be enclosure in what I call the Vagina Ghetto, a restricted space outside of which women are not welcome. We need to stop reinforcing this tired trope.” If it still doesn’t make sense to you what the “Vagina Ghetto” is, be patient.