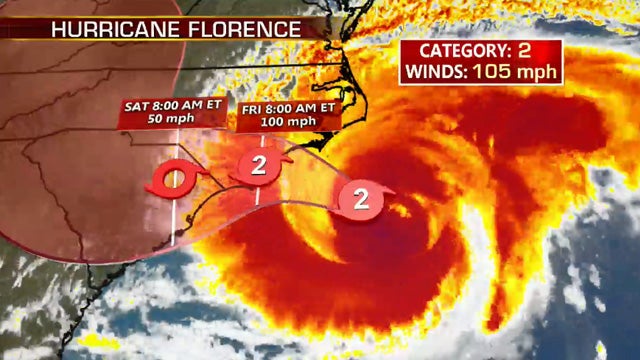 So if you’re in the bull’s-eye four days out, the odds are you’re not gonna be in the bull’s-eye when the thing hits. This is not to be critical of anybody. And I’ve also pointed out that, in my experience, only two times as a hurricane veteran, a resident of Florida, only twice has a hurricane’s intensity, when it hit, been exactly what was forecast. Most of the time the hurricanes are not as strong, like if they forecast a Category 4 to hit, it usually is a Category 2 or sometimes less. But it’s seldom as strong as the initial forecasts.

The initial forecasts are what caused the panic. The initial forecasts are what caused the stores to be empty of water and food, the gasoline stations to be absent gasoline and all that. And by the time the storm hits it’s still bad, but it’s not nearly as bad as originally forecast. The same thing’s happened here. This forecast path is nowhere near — I shouldn’t say “nowhere near,” but it’s markedly different from what it was four days ago.

And now the intensity. Yesterday they were telling us it’s gonna be hurricane Category 4. Now it’s down to 105 miles an hour and maybe even less. I track the Hurricane Hunter airplane missions, my friends. I guess I shouldn’t divulge that. But I do. I have the super-secret website, and you can follow, anybody, if you know the website you can follow the hurricane hunter sending its data out as it’s in the storm.

For example, all day yesterday the winds were max 115 miles per hour, but they didn’t report that until the 8 o’clock update last night. I’m not criticizing anybody, please understand. I’m the first to tell you I am not a meteorologist. I am not a hurricane forecasting expert. I am a highly experienced hurricane citizen veteran. And whenever one of these things is headed your way, you face the loss of a lot; so you learn how to track them, how to deal with them. That’s what I’ve done since being a resident here since 1997, which, you know, that’s 20 years. That’s a lot of experience. So this storm yesterday they were saying 115-mile-an-hour winds, but they weren’t. By the way, they were saying 130 all day yesterday, and they were really 115. They didn’t report the 115 ’til 8 o’clock last night. Now they’re reporting 105.

But I still wonder. Which is why sometimes I come here and tell you what I said so that you’ll remember in case you forgot. But it’s a service, it’s a public service. My public service here is intended to calm people down because these original forecasts — sometimes they’re right. Like, I can count two of the storms that have hit us that were as intense as the forecast said they were gonna be.

I can’t recall a time where a hurricane forecast to hit a certain spot four days out, I can’t recall that spot being hit. They always change. The track is always moving. The models are always showing something different. And the weather service, hurricane center, they have to make the best judgment as to which model they think is the most accurate of all. And there are many more models than what you’ll see on a website spaghetti model graphic. And they rely on much more than models. 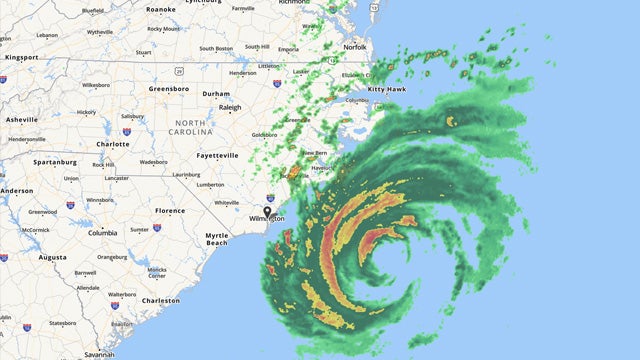 That’s another thing about these storms. They’re loud as they can be. However, despite my being factually correct, remember yesterday we told you the Washington Post did a story that Donald Trump is complicit in this hurricane? So I have a question. If CO2 and climate change are responsible for the increasingly intense storms — well, this one is not increasingly intense, it’s decreasingly intense.

RUSH: So I have here the latest from the National Hurricane Center, the 2 p.m. track. And, man, folks, this does not look good. It’s essentially gonna stall, if they’re right here. If not, it’s gonna move — but get this. It is due to make landfall, according to this latest forecast, at 8 a.m. tomorrow on the Southern North Carolina shoreline. Twelve hours later, it still has not made South Carolina, according to this.

The map I have does not have cities on it, so I’ll have to find a map of cities on it and plot this. This is the National Hurricane Center track map, they don’t put cities on there, not enough space, but I can just tell you that this hits — I’m gonna guess guest this is around Wilmington, close to Wilmington, at 8 a.m. tomorrow and 12 hours later, 8 p.m. Friday, it’s not even moved enough west to get to the South Carolina border.

That is not quite stationary, but it’s close, and it remains, according to this, a Category 2 hurricane all that time. It will be on land, which means it should weaken some. But it’ll then end on 8 a.m. Saturday 12 hours after that it finally gets into South Carolina as a tropical storm. Now, as we get closer to the event of course these forecasts become more accurate. And so this is probably fairly solid.