RUSH: From TheHill.com: “Trump Stirs GOP Midterm Angst with Talk of Shutdown.” Really? “President Trump threatening to shut down the government if he doesn’t get sufficient funding for a border wall.” Look, this is only the No. 1 promise he made. It is only in the top five, maybe three reasons he got elected.

He has to get the wall — and especially if anybody believes the Democrats are gonna win the House, he’s got to get it before the midterms. His base voted for him on that basis. He’s got to — plus he wants to deliver on it. Anyway, let me take another brief time-out. We’ll come back and continue. We’ll get to the clip that Fox & Friends played of me this morning that we think Trump may have tweeted in reaction to.

RUSH: All right. So the president tweeted today, “Rush Limbaugh is a great guy who truly gets it,” but nobody knows why. It just didn’t come out of the blue. Well, it came out of the blue, but nobody knows what it’s about. So all we can do is guess. The best guess is the president was watching Fox & Friends. They played an audio sound bite of me from this program yesterday. Here is that segment… 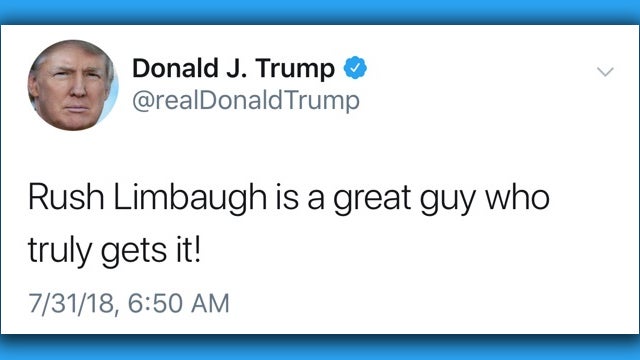 EARHARDT: The president, you know, he doesn’t care what anyone thinks. He says what his on his mind. He’s doubled, tripled down on this shutdown. “We will ‘shut down’ the government if we don’t get what we want’ because he is keeping in mind who went to the polls to vote for him. He campaigned on this, and Rush Limbaugh reminds everyone of that when he says this… 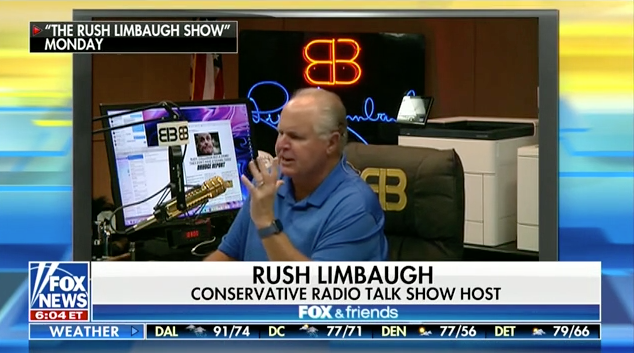 Here’s Steve Doocy, sound bite No. 2, following it up.

DOOCY: It will be one of the top issues going into the midterms.

EARHARDT: How about those numbers? Rush said 85 to 92% support in the Republican Party. The base supports President Trump.

RUSH: Yeah, and 85% on the low end. That number, the number of Republicans, that’s in Pew, that has been in Rasmussen, that’s been Gallup. It’s been in a number of different polls that Trump has this ma… I mean, there hasn’t been a Republican president since Reagan that’s had that much support of Republican voters. That’s very high. Of course, one of the objectives that the media has had along with the Democrats is to drive a wedge between Trump and his voters. That’s what all of this has been about from the get-go, and that polling data suggests utter failure.

There was also an effort to say that Trump’s voters were somehow not really Republicans. They were a combination of populists and nationalists and anybody Steve Bannon could pay to become a populist and nationalist and maybe a few independents here, a couple of bedraggled Democrats. In other words, it was a new coalition that was only going to be a coalition while Trump was around. That’s what all the political experts told us. Every political expert, every blogger political expert, every analyst said that the Trump coalition is unique, and it will never exist once Trump’s gone.

They said that because that’s what they hoped was the case. Neither party wants to believe that they have lost a significant number of their voters to Donald Trump because they all hate Trump, and they still think Trump is this lamebrain, unqualified, unsophisticated outsider who has got no right to even be in Washington breathing the same air they breathe. And so the effort here to characterize those of you who vote for Trump as a bunch of alien-type oddballs. 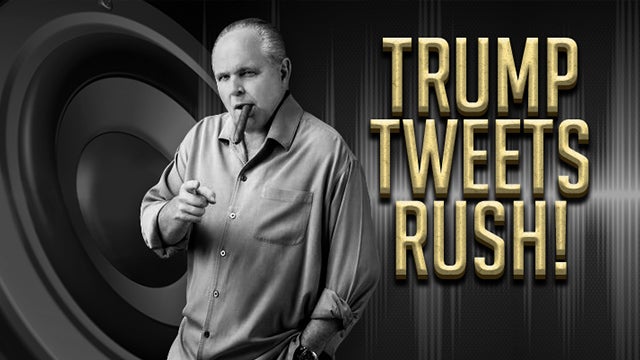 You’re so nutty, you’re so conspiracy oriented, and there’s enough of you out there that Trump found a way to magically put you all together and create this new populist/nationalist coalition. The fact now that Trump’s base is the Republican Party base? Believe me, that is sending shivers down the spines of the Republican Party hierarchy leadership. Make no mistake about it. That’s not supposed to happen, because the reason for…

I mean, if 85 to 92% of the Republican base supports Trump, then it means the Republican Party had better keep being Trump, better keep on the Trump agenda if they want to keep these voters — and that’s what they’re scared to death of. They don’t want to have to keep the Trump agenda. It’s like Reagan. Both parties can’t wait ’til Trump’s gone so they can get back to business as usual, which is usually ignoring you except during campaigns.

Promising you what you want to hear during campaigns and then forgetting about it after they get elected. Well, here’s Trump keeping every promise so far and making good on every claim — such as making America great, reviving the economy, creating jobs, bringing jobs back, increasing wages, any number of items in the Trump agenda. In a year and a half, Trump has accomplished much more than any recent U.S. president ever, and this just sends chills down the spines of the establishment guys because Trump illustrates it could be done.

Trump illustrates an outsider can come in and do this. Revive an economy as large as the United States economy in a year and a half? It’s not supposed to be able to be done, folks. The way Obama talked about the economy is the way the establish wants everybody thinking about it. (impression) “Well, our best days may be behind us. That doesn’t mean we have to suffer, but we gonna have to recalibrate. And those jobs that are lost? You just gotta realize they ain’t coming back. That means that you gotta go to government job training and relearn the new skills for the 21st Century.”

Trump punts that, says, “To hell with that,” brings these jobs back, realigns trade deal so that they are much more fair for the United States of America, closes the American back pocket to the rest of the world that’s been picking it, and shows that it can be done. The establishment wants you to believe that, “You know the way we were trending for eight years in Obama? That was nature! That’s as good as it could get because the best and the brightest were in charge and they were dealing with the realities of the world and the new globalism.”

Trump is one of the biggest interrupters, disrupters in the history of this nation. This little stat that 85 to 92% of Republican voters support and love Trump? (chuckles) Believe me, that was not supposed to happen. Trump coalition was supposed to remain some odd collection of oddballs, kooks and freaks who don’t vote, usually. Remember that aspect of it, too? If you think back to the campaign, the media tried to tell us that the Trump coalition was made up of people who never voted before, or hadn’t voted in a long time, because they’re so fed up.

“They’re malcontents! They’re fed up. They feel left out. They feel like America has no place for them.” That was all said mocking them and making fun of them. The point was that the Trump voters really nothing more than a bunch of fringe kook balls and nut burgers who had been united by a fellow fringe kook nut burger, Donald Trump, but that when Trump went away, so would that coalition. Now they’re looking at these numbers, and that’s not gonna happen. The Republicans are looking at, if they want to keep this base, they’re gonna have to heed to the Trump agenda, which not many of them apparently want to do.

But it still is the case on the government shutdown. You know, there’s one other thing to say about this — and I mentioned it yesterday, and I’m sure a lot of you were surprised. The United States economy, the stock market does not suffer during shutdowns. Everybody thinks the opposite. Everybody thinks, “When the government is shutdown, Wall Street tanks. The American business sector comes to a screeching halt because people are scared to death that the government is no longer operating.” It’s not true.

It’s a myth that the government shutdown screws the stock market and the economy. It’s also a myth that government shutdowns hurt Republicans! Even the ’95 shutdown — which is the reason for the ongoing Republican fear of shutdowns — did not hurt them. They did okay in the midterm elections one year after that, the presidential election. They didn’t win the presidency, but they kept the House. They didn’t lose the House after the 1995 budget deal, which featured a shutdown.